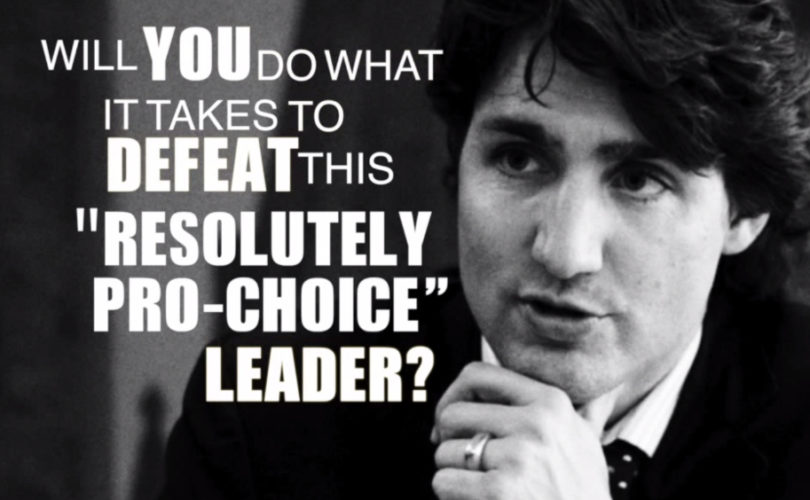 March 13, 2015 (UnmaskingChoice.ca) — I write this from Victoria, where our #NO2Trudeau Campaign will be kicking off this evening at the University of Victoria. With speaking locations booked across the country in nine provinces and the campaign bus ready to go, I was interested to see how the media would react. The media has an “abortion narrative” that it generally sticks to: Abortion in its current unrestricted form is here to stay in Canada, but there are anti-abortion people who dislike this, and occasionally do something of mild interest. This is generally seen through the lens of “How Will Stephen Harper Keep His Crazies Quiet?” rather than a more research-intensive or nuanced approach or any genuine attempt to understand what Canada’s emerging pro-life movement stands for.

That’s the line that Tasha Kheiriddin took in her analysis of the #NO2Trudeau Campaign—her title announced “Bad news for the Tories—the abortion issue comes roaring back,” and features a photo chosen for obvious reasons of a group of older people at the March for Life carrying a giant statue of Mary. I have no bone to pick with Kheiriddin in general—I quite like a lot of her writing, including her most recent column in the National Post that I happened to read on the plane on the way here. She’s no unhinged Heather Mallick. But a lot of her analysis was disappointingly shallow, as it indicated the same lazy, research-free approach most journalists take towards the pro-life movement.

For example, this passage:

The CCBR employs similar shock tactics and has already targeted other politicians north of the border. In last fall’s New Brunswick provincial election, Liberal Leader Brian Gallant was the subject of a graphic mailout showing a bloody five-month-old aborted fetus with the caption, “A vote for Brian Gallant and the Liberals is a vote for this.” The postcards didn’t sway voters much: Gallant and his party won a majority.

The postcards weren’t mailed out, they were hand-delivered, which quick overview of coverage at the time would have revealed. Further, that statement is presented without nuance—a sloppy “cause and effect” type statement. Rather, if Kheiriddin had looked a bit closer at the New Brunswick campaign, she might have parsed the details a bit more carefully. During the last week of the New Brunswick provincial election, we chose five ridings to postcard in extensively, all “close” ridings–but in none of them were the Progressive Conservatives leading, and in one the PC candidate was actually 10 points down when we came in. Conservatives won three of the five ridings. That, and a discussion on abortion dominated the election narrative for the entire final week of the campaign, nearly every single media outlet discussed the issue, and the leaders of both provincial parties publicly addressed the abortion issue. That’s a much different story than “Anti-abortion activists distribute gory literature, have no impact.” We were quite thrilled by the outcome—three out of the five ridings we focused on was precisely the sort of result we’d been hoping for.

Secondarily, Kheiriddin points out that this may make some of the Conservatives uncomfortable, especially since so much of their base is anti-abortion. I certainly hope it will. We believe the pro-life movement has two great tasks to accomplish. First, recreate a consensus on abortion in areas where the majority of people are pro-choice. Based on multiple rounds of polling data, our messaging and imagery work very effectively in, as one recipient put it, “turning people off abortion.” This is why we’ve chosen certain areas for distribution. But the second task is to revitalize and reenergize the existing base, which is certainly a very significant portion of Stephen Harper’s coalition. Without pro-lifers, there would be no Conservative majority government. But it is the job of the grassroots to activate the base, and recreate consensus. So I do think the Federal Conservatives will certainly notice the fact that of all the different groups that make up their base, pro-lifers are the most active, can put the most boots on the ground, and are now capable of fielding unparalleled educational and political projects. One million pieces of literature distributed by teams of young people across the country can’t be easily ignored.

Additonally, literature distribution is only one aspect of this campaign–boots-on-the-ground political activism and thousands of phone calls to begin education and voter identification are also an enormous part of this effort. A quick look at the #NO2Trudeau website would show a campaign that is multi-faceted–but that doesn't make a nearly as compelling narrative for most of the media.

As pro-life leader Gregg Cunningham has pointed out, liked reformers are rarely effective and effective reformers are rarely liked. So we’re fully aware that many people don’t want us to broach this issue, and will be angry that we are. No one likes to be confronted with an ugly truth, especially one we’ve been ignoring for so long. But the polling numbers and thousands of face-to-face experiences we’ve had across this country don’t lie: Even if many Canadians dislike our pictures, they often end up disliking abortion even more.