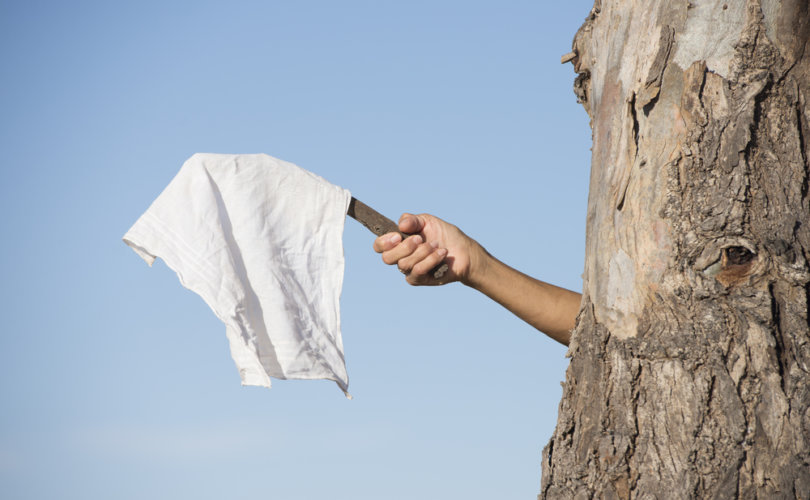 June 23, 2016 (AlbertMohler) — Now that the moral revolutionaries are solidly in control, what is to be demanded of Christians who, on the basis of Christian conviction, cannot join the revolution? The demands have now been presented, and they represent unconditional surrender.

The latest terms of surrender were delivered last week by Mark Tushnet, William Nelson Cromwell Professor of Law at Harvard Law School. In a stunningly candid essay, Tushnet declared a total liberal victory and chastised his fellow liberals for what he called a “defensive crouch liberal constitutionalism” that is now outdated. With liberals firmly in control of almost every power base in the culture — most importantly, the federal courts — there is no reason for liberals to play defense, he asserts.

As he makes his case, he argues that liberal judges are now in the majority and that the Supreme Court, given the death of Justice Antonin Scalia, is unlikely to reverse any liberal decisions handed down by lower courts. Federal judges, Tushnet argues, “no longer have to be worried about reversal by the Supreme Court if they take aggressively liberal positions.”

Ever the law professor, Tushnet called for liberal constitutionalists at every level to “compile lists of cases to be overruled at the first opportunity on the ground that they were wrong the day they were decided.” He also calls for liberal judges to “exploit the ambiguities and loopholes in unfavorable precedents that aren’t worth overruling.” He lists some of the decisions he targets and then goes on to criticize even some of the most liberal judges and justices, including Justice Ruth Bader Ginsburg, for being too defensive and looking over their backs at conservative critics. He also makes the apt assessment that, with a liberal victory in the culture now in hand, the revolutionaries can now stab Justice Anthony Kennedy in the back, politically speaking. That’s the thanks Justice Kennedy receives for making the liberal victory possible. He deserves nothing less.

But in the most crucial section of his essay, Professor Tushnet delivers the ultimatum to the losing side in the culture conflict, including evangelical Christians — “You lost, deal with it.” To his fellow revolutionaries Tushnet announces, “The culture wars are over; they lost, we won.”

Then he goes for the kill in making his argument:

“For liberals, the question now is how to deal with the losers in the culture wars. That’s mostly a question of tactics. My own judgment is that taking a hard line (“You lost, live with it”) is better than trying to accommodate the losers, who – remember – defended, and are defending, positions that liberals regard as having no normative pull at all. Trying to be nice to the losers didn’t work well after the Civil War, nor after Brown. (And taking a hard line seemed to work reasonably well in Germany and Japan after 1945.)”

How to deal with the losers? Here we meet the reality of liberal judgment in a day of liberal ascendency. Tushnet argues that conservatives should now be met with a hard line and a demand for total surrender — no accommodation whatsoever. Don’t even try to be nice to moral enemies, Tushnet commands, since their arguments have no normative authority of any kind.

With absolute candor, Tushnet calls for moral conservatives of all stripes to be treated like Germany and Japan at the conclusion of Word War II. Both nations, having declared war on the United States and its allies, were required to submit to unconditional surrender and were subject to occupation by the victors. We are to be treated like defeated Nazis and the Japanese high command.

Take a hard line, Tushnet openly advises, and take no prisoners. He concludes his point with these words:

“I should note that LGBT activists in particular seem to have settled on the hard-line approach, while some liberal academics defend more accommodating approaches. When specific battles in the culture wars were being fought, it might have made sense to try to be accommodating after a local victory, because other related fights were going on, and a hard line might have stiffened the opposition in those fights. But the war’s over, and we won.”

More than a year before the Supreme Court legalized same-sex marriage nationwide, New York Times columnist Ross Douthat had written that once the decision was handed down, the winning liberals would “recognize its power.” There would be no negotiation then. “Instead, all that’s left is the timing of the final victory — and for the defeated to find out what settlement the victors will impose.”

Well, now we know. We really knew before the Tushnet essay appeared. Just ask the florists, photographers, and bakers who have been dragged before tribunals. Ask the former Fire Chief of Atlanta. Ask a Christian student at your local college or university.

Mark Tushnet is a well known member of the intellectual Left. A proponent of “critical legal theory,” Tushnet argues against what he calls grand constitutional theories and argues instead that liberals should treat the courts just like any another branch of government. Back in 1981, he explained that, if asked how he would decide a constitutional case as a judge, he would “make an explicitly political judgment: which result is, in the circumstances now existing, likely to advance the cause of socialism?”

He would then, he explained, “write an opinion in some currently favored version of Grand Theory.” In other words, reach the decision that favors the advance of socialism and then cloak the decision in whatever legal theory then seems favorable. Professor Tushnet is not new to being candid.

Writing in anticipation of the Supreme Court’s Obergefell decision, Jonathan Rauch, a proponent of same-sex marriage, wrote to his colleagues on what he was confident was the winning side. Some “on my side of the gay-equality question,” he wrote, want to expunge all opposing moral views. This, he chided, was deeply wrong. “Now our duty is to protect others’ freedom to be wrong, the better to ensure society’s odds of being right.”

We now see that this was the road not taken. Instead, opponents of the moral revolution are to be treated with scorn, contempt, and worse. The terms of moral surrender have been delivered to us, and they are absolute and unconditional. Just ask Japan and Germany what that means.