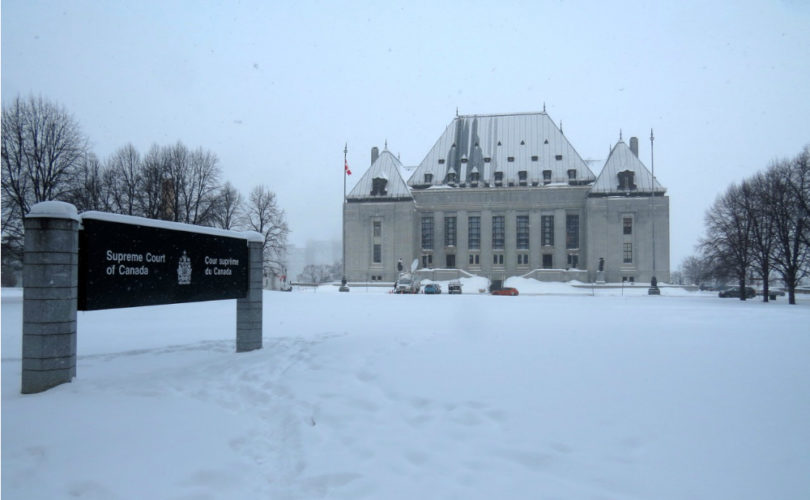 Canada's Supreme Court is covered in snow on February 6, the morning of their decision to overturn Canada's ban on physician-assisted death.Pete Baklinski / LifeSiteNews

January 27, 2017 (LifeSiteNews) – When the public misunderstands a court ruling, the consequences can be huge.  For good or for evil.  The 1772 ruling in Somerset v. Stewart, to free one Black slave in England, was misinterpreted by the public as freeing all 15,000 slaves in England, even though the ruling was narrow and technical.

Somerset, a Black slave, was brought from Virginia to England in 1769, by his master, Charles Stewart.  Two years later he escaped.  He was then captured and put on a ship to be transported to Jamaica, there to be sold.  Somerset’s Christian godparents applied to the court for Somerset’s release.

The case attracted a great deal of attention in the press.  Somerset's lawyers argued that while colonial laws might permit slavery, neither the common law of England nor any law of Parliament recognized the existence of slavery, and slavery was therefore unlawful.  Stewart’s lawyers argued that property was paramount, and that it would be dangerous to free all Blacks in England.  Members of the public donated monies to support the lawyers for both sides of the argument.

Guided in part by the maxim fiat justitia, ruat coelum (“Let justice be done though the heavens fall“), Lord Mansfield ruled that since England’s written laws did not clearly permit or establish slavery, Stewart had no legal right to force Somerset to go to Jamaica: “… no master ever was allowed here to take a slave by force to be sold abroad because he had deserted from his service, or for any other reason whatever.”

Lord Mansfield’s narrow and technical ruling merely stated that British slave owners in England could not force their slaves to be forcibly taken to the colonies.  But this judgment was actually silent about the status of slaves in England.

Lord Mansfield's judgment had a profound effect on slaves. Many of them misunderstood the ruling to mean that slaves were emancipated in Britain.  Despite Lord Mansfield’s best efforts, the case was reported in the press, and internationally, as ending slavery in England.

After the ruling, numerous newspaper advertisements of the time show that Black slaves continued to be bought and sold in England.  Nevertheless, this court ruling proved to be a boon for the anti-slavery movement.  The perception of there being an “anti-slavery” court ruling, while inaccurate, helped turn public opinion against slavery.  In 1807 Parliament abolished the slave trade, and by 1838 slavery in British colonies was also abolished.

In 21st century Canada, there is much public confusion about the 1988 Supreme Court of Canada ruling in R. v. Morgentaler, rendered 29 years ago this January 28.  In Morgentaler, five of seven Justices struck down section 251 of the Criminal Code, which allowed abortions only if approved by a Therapeutic Abortion Committee.

Justices Dickson and Lamer held that section 251 was arbitrary and unfair, and did not provide a clear exemption from the criminal law.  Nowhere do they state that there is a constitutional right to abortion.

Justices Beetz and Estey recognized society’s interest in the protection of the unborn child, ruling that Parliament is justified in requiring a reliable, independent and medically sound opinion as to the “life or health” of the pregnant woman in order to protect the state interest in a foetus.

Justices McIntyre and La Forest ruled that “no right of abortion can be found in Canadian law, custom or tradition” or in “the language, structure or history of the constitutional text …or in the history, traditions or underlying philosophies of our society.”  These two Justices also recognized the public interest in the protection of the unborn, and stated that courts must refrain from imposing or creating rights with no identifiable base in the Charter.

In short, the Supreme Court in Morgentaler recognized expressly that Parliament has the right to pass legislation to protect the unborn, with five of seven Justices striking down Section 251 as the wrong way to achieve that legitimate goal.  This muddled and incoherent decision was not a victory for pro-lifers.  However, with the Court inviting Parliament to draft different legislation, this ruling is certainly no victory for pro-choicers.

Nevertheless, abortion supporters have sometimes characterized the Morgentaler ruling as a Canadian version of Roe v. Wade, by which the U.S. Supreme Court did, in fact, create a constitutional right to abortion.  For example, some student unions have claimed that pro-life speech should be banned at universities “because abortion is a constitutional right.”  Leaving aside the fact that a free society allows its citizens to criticize and disagree with the constitution, this claim completely mischaracterizes the Morgentaler decision.

The false notion that R. v. Morgentaler established a constitutional right to abortion can have a very powerful and negative impact in shaping public policy.  If the Canadian public perceives the Morgentaler ruling as a pro-choice victory, this will influence public opinion in favour of abortion being legal.

Those who want to see Parliament pass a law to protect the unborn should not mourn the Morgentaler decision as a victory for their pro-choice opponents.  Doing so helps the pro-choice side.

Instead, pro-lifers should point out that in Morgentaler, the Supreme Court invited Parliament to pass legislation to protect the unborn.