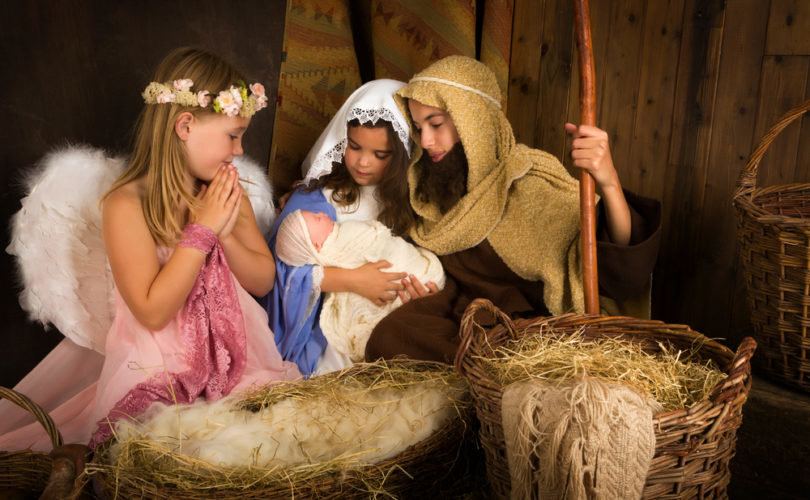 December 20, 2013 (HLI) – Tradition teaches that Saint Francis of Assisi set up the first Nativity scene in order to inspire and encourage a greater appreciation of the wonders of the first Christmas. The year was 1223, and Francis created the scene in a cave outside Greccio, Italy featuring a wax figure of the infant Jesus and a man and a woman playing the roles of Mary and Joseph, with a live donkey and ox also present. Local shepherds watched over their sheep in nearby fields, just as shepherds in Bethlehem had watched over theirs on that first Christmas Eve.

The brethren were summoned, the people ran together, the forest resounded with their voices, and that venerable night was made glorious by many and brilliant lights and sonorous psalms of praise. The man of God [Francis] stood before the manger, full of devotion and piety, bathed in tears and radiant with joy; the Holy Gospel was chanted by Francis, the Levite of Christ. Then he preached to the people around the nativity of the poor King; and being unable to utter His name for the tenderness of His love, He called Him the Babe of Bethlehem.

The first Nativity scene presentation proved to be so popular that a new tradition was born, with people around the region creating their own living Nativities to celebrate Christmas. Eventually, Christians worldwide celebrated Christmas with their own scenes, often with statues so that they could remain in place, in their town squares, churches and homes. In addition to the baby Jesus, Mary, Joseph, a donkey and an ox, later Nativity scenes featured angels, shepherds, sheep, camels and the three kings who traveled to present gifts to the infant Jesus and his parents.

Every Christmas crib provides a simple invitation to open our hearts and minds to the mystery of Life. It is an encounter with the Eternal God, who as the second Person of the Holy Trinity entered history and mortality in the mystical scene of the first Nativity for all to see (though he had truly become human some nine months earlier!). Although few encountered Him that first Christmas in the simple and lowly dwelling of Bethlehem, it would not be long before the world knew that he came for all: rich and poor, sinner and saint, believer and non-believer.

Christmas anchors us in the profound message of the closeness of the One who created the world; the One who becomes human and dwells among us — Emmanuel. The God who made the whole universe and created man out of the dust of the earth, embraces our humanity — without sin — and takes up His first dwelling among us as every man — in the womb of Mary.

Sadly, just as with that first Christmas Eve when only a few persons recognized the wondrous gift that entered human existence, so it is with human life today. So many forget the miraculous wonder of every conception. They forget that the eternal Logos — the Word who became flesh and dwelt among us — was once an embryo, a fetus and a developing child. The Incarnation sanctifies every pregnancy, every womb and every developing child within the womb. Moreover, Jesus’ first act of redemption began from the womb of Mary, His mother. Saint Paul puts it best:

Blessed be the God and Father of our Lord Jesus Christ,who has blessed us in Christ with every spiritual blessing in the heavens, as he chose us in him, before the foundation of the world, to be holy and without blemish before him. In love he destined us for adoption to himself through Jesus Christ, in accord with the favor of his will, for the praise of the glory of his grace that he granted us in the beloved. (Ephesians 1:4-6)

This forgetfulness has lead humanity down a perverse path. Not only is nascent life so often rejected, vulnerable life everywhere is attacked and devalued. Many think only in temporal terms, forgetting that we are made of spirit, body and soul.

Saint Francis wanted all on Christmas Eve to see and understand the reason for their celebration — Jesus, the Babe of Bethlehem, the Light whose appearance breaks through the gloom, dispels the darkness and enables us to understand the meaning and the value of our own lives and of all history. In the midst of an every growing secularization and de-Christianization of our culture, the wonder of Christmas anchors humanity in its origin and re-birth given to us that miraculous winter’s Eve. The Incarnation reveals in an incomparable and amazing way that every human life is dignified in and through the One who became man.

My Christmas prayer is for us to remember the unconditional Gift of Love that entered human history, and then died for us, that we could be saved from sin. I pray that there would be an end to all forms of violence against the dignity of life and that all would discover their true eternal destiny with Christ and God the Father in heaven.

May the blessings of the Christ Child be yours this Christmas and throughout the New Year.

Reprinted with permission from HLI