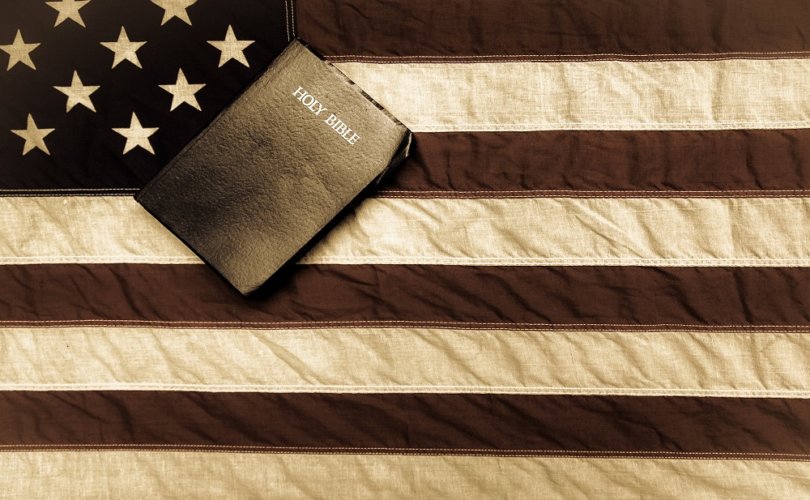 October 8, 2019 (The Catholic Thing) — In a column a few weeks ago, I called upon the USCCB to drive a stake through the undead heart of the dreadful New American Bible — and the lectionary based upon it. I said that I would discuss several categories of their blunders. The first was the NAB's drab preference for the abstract over the visible and palpable. The second category is this: ideological tendentiousness, unhelpful either for understanding the Bible or for inspiring or strengthening faith.

The good translator or editor ought to burn into his soul the words of the Baptist: He must increase, and I must decrease. Nothing and no one should obtrude between the reader and the text. That doesn't mean you will not profit from commentary. But the commentary should always aim to elucidate, not to confuse, and never to thrust upon the reader the vague authority of “scholars,” who are often only a little club of like-minded people.

The NAB violates that directive at every pass.

Consider the very beginning of Genesis: “In the beginning, God created the heavens and the earth.” It's bad already that you can't get there without a “title,” “The Story of Creation,” which will be followed by other titles and subtitles, and separation of the text into blocks, not for visual ease, but for editorial decisions regarding presentation — what goes with what, and what doesn't. The mighty first sentence I have cited doesn't exist in the NAB. It is in the Septuagint, and in Jerome's Vulgate. It is in every other modern version of Scripture that I can find, in English, German, Spanish, French, Portuguese, Italian, Welsh, Swedish, and Icelandic. It is not in the NAB.
What is there? A grammatical train-wreck:

In the beginning, when God created the heavens and the earth — and the earth was without form and shape, with darkness over the abyss and a mighty wind sweeping over the waters — Then God said, Let there be light, and there was light.

What is this business about when and then? The editors explain: “Until modern times the first line was always translated, 'In the beginning God created the heavens and the earth.' Several comparable ancient cosmogonies, discovered in recent times, have a 'when…then' construction, confirming the translation 'when…then' here as well. 'When' introduces the pre-creation state and 'then' introduces the creative act affecting that state. The traditional translation, 'In the beginning,' does not reflect the Hebrew syntax of the clause.”

Strange, that the Hebrew speakers who composed the Septuagint did not see it that way, nor did Saint Jerome. The most we can say is that you might read it the way the editors do, but there is no call for it; the traditional reading is the literal one, rendering the plain sense of the text. Why then would you not follow it?

Everywhere else, cosmogony is preceded by theogony, the birth of the gods. Not here. Everywhere else, the myth-making mind of man focuses upon the origin of the stuff out of which the world would be made; for instance, the dismembered limbs of the malignant Babylonian mother-goddess Tiamat. Not here.

Here, the earth, made by God but not yet lent any character, is tohu w'vohu, an excellent rhyming pair in the Hebrew. These words do not just describe something shapeless, like jelly. They are more powerful than that, morally and ontologically: formlessness, confusion, unreality, emptiness, says the primary Hebrew lexicon, translating tohu, and showing how that meaning extends to what is empty, unreal, worthless; such as moral unreality or falsehood.

Luther's wuest und leer gets the point across, as does the Douay void and empty, following Jerome's inanis et vacua. The sacred author did not have a metaphysical vocabulary; we have here his most potent way of asserting that without the creative will of God, we have what is somehow worse than mere absence.

It seems, then, that the editors want to sap the faith. They say, slyly, “And hath the Church said that God made the world from nothing? Perhaps so, but we cannot find it in the text.”

We see the same motive in their uncharacteristic turn toward the physical later in the sentence, where they say that a “mighty wind” was “sweeping over the waters.” Aware that they are jiggering the text, they relegate the literal meaning to a footnote: A mighty wind: literally, “spirit or breath [ruah] of God”; cf. Gn. 8:1. The reference to 8:1 is not pertinent, because the Hebrew there does not read ruah Elohim, spirit of God. There, ruah simply means wind, as it often does; God is raising a wind to settle the seas after the flood. But ruah in general means breath, wind, spirit, with reference to one's principle of life, or one's will, desire, temper. It is an extraordinary image, then, that the spirit, the breath, the power of God should be moving or hovering or brooding above the waters.

That's the action, but the NAB squad, having decided to elbow God from his place, giving us that “mighty wind,” could not then translate the verb as having to do with gentle movement, or with cherishing and brooding, as the Hebrew lexicon would have it. So we have sweeping instead. Instead of God intimately involving himself in what is otherwise without meaning, we have Him as an interested spectator, looking upon a hurricane or something, and then deciding to do something about it.

In other words, they have blunted the earth-shaking newness of the sacred text, muffling the profound theological insights, and reducing it to a fairy-tale. They have made it less poetic, but more ordinary, everyday, and dull. They use every schoolish excuse they can to offend against the straightforward tenets of the faith.