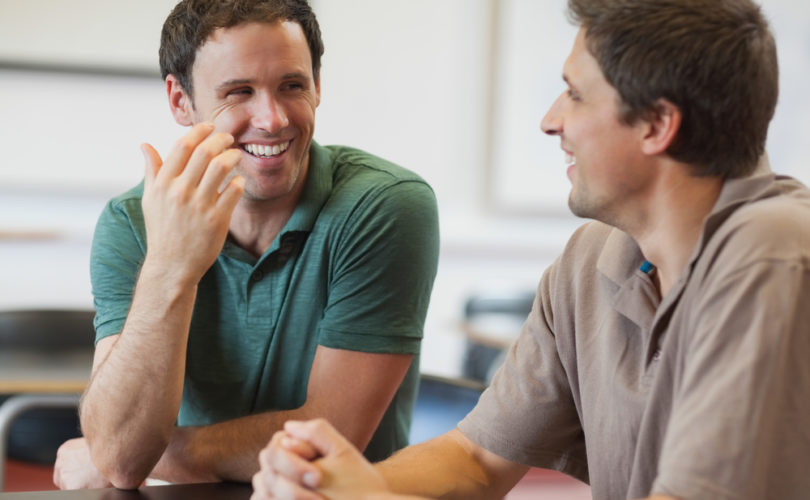 April 30, 2015 (CrisisMagazine.com) — “Louie, I think this is the beginning of a beautiful friendship.…”

When Humphrey Bogart’s character Rick closes the classic film Casablanca with these memorable words, there is no mistaking what he means. Rick and Louie anticipate a mutually respectful—and beneficial—relationship, arising from their past shared experiences and based upon continuing common interests.

Perhaps that’s enough to make their friendship “beautiful”—but what makes a friendship spiritual?

Rewind the clock back beyond World-War-II Morocco to a twelfth-century Cistercian abbey of Rievaulx in North Yorkshire, England, and you’ll find an answer. Here you’ll encounter the slightly famous St. Aelred, now known to some as the “gay abbot of Rievaulx” and author of a notable work titled Spiritual Friendship.

Wait—“gay abbot of Rievaulx”? Based on what evidence?

Well, no direct evidence at all, actually. But a few academics insist on theorizing that St. Aelred had same-sex attraction, thus causing some “gay-friendly” organizations to refer to him as their patron saint.

Enter those whom Crisis readers will recognize as the “New Homophiles”—they, too, are partial to St. Aelred over at the duly-named blog site “Spiritual Friendship” (with the Twitter handle “AelredsFriends”). The New Homophiles embrace and promote an interpretation of St. Aelred’s writings that favors the experience of “spiritual friendship” among those with same-sex attraction. But, there are problems with their interpretation. Chief among the errors of the New Homophiles’ views on St. Aelred’s writings are:

Let’s take a look at these three areas in comparison to what St. Aelred himself asserts in Spiritual Friendship. But first, let’s add just a bit more context on his twelfth-century work.

What ought a reader of St. Aelred’s works keep in mind when reading them? He’s the head of a twelfth-century Cistercian monastery and is writing for an audience of monks for their spiritual benefit. Thus, you can take Spiritual Friendship out of the monastery, but you really can’t take the monastery out of Spiritual Friendship. If you do, you lose the context of everything Aelred is trying to communicate.

Also, one of the keys to understanding Spiritual Friendship is seeing how St. Aelred’s work is itself about love of neighbor in a way that is intrinsically linked to the monastic approach to the “way of Christian perfection” and love of God that forms the heart of monastic life and spirituality. Moving through the purgative, illuminative, and unitive “ways” toward the fullness of Christian perfection and intimate union with God in this life also forms the foundation of St. Aelred’s understanding of genuine (spiritual) friendship, its testing and forming, and its “consummation” which can only be realized among the “perfect” (those who achieve abiding spiritual progress toward that deep union with God).

Just as authentic Christian spiritual perfection regarding union with God transcends the temporal by giving the “perfect” a foretaste of the eternal Beatific Vision, so too spiritual friendship is only genuine if it remains true as both a present and eternal reality for those united in this friendship. Such a perfected and consummated friendship in this life is indeed rare, and it’s only achievable by the “good,” St. Aelred says—those “who within the limits of our mortal life live sober, upright, and godly lives in this world.” Progress toward the consummation of spiritual friendship is possible for the “good” who are also willing to devotedly pursue Christian perfection.

The Key to Understanding “Eros”: It’s About Time

So, can “same-sex eros,” as claimed by some of the New Homophiles, enter into St. Aelred’s notion of “spiritual friendship,” so long as same-sex sex acts are avoided?

The Catholic Church’s understanding of authentic eros is that it requires complementarity and reciprocity. The love that is “eros” is a yearning or desire to receive another whose self-gift “completes” (rather than “repeats”) our own self-gift. It’s a longing for complementary communion. St. Aelred, in contrast, makes it very clear that it is vitally important for “spiritual friends” to be found among those with deep similarities: “Above all, choose one who does not differ too much from your character or conflict with your disposition.”

But, wouldn’t that mean, then, that same-sex attraction might favor the formation of “spiritual friendship,” since obviously same-sex “eros” is about sameness, right?

No, because the “sameness” is what contradicts a properly ordered eros. It’s the problem, not the solution. Furthermore, there remains one more key dimension of eros that stands in stark contrast to St. Aelred’s formula for “spiritual friendship”—eros is “temporal” love, not eternal love.

Let that sink in—eros requires the passage of time for its fulfillment. It is a love that arises from a longing for a communion that has yet to be consummated. Once the love-longing is fulfilled, it is no longer eros-love but is agape-love. The mark of the union of “spiritual friendship” is that, once entered into, it becomes a never-ceasing reality that lasts beyond death and into eternal life. It is, as St. Aelred says, an expression of the “Sabbath rest” of true love rooted in the yoke of Jesus Christ (cf. Mt. 11:28).

Even the authentic eros of conjugal love is a temporal reality that stops on this side of heaven. The eros of husband and wife causes the couple to desire consummated communion in time, as a sign and foretaste not of their own everlasting marital unity but of each of the spouse’s desire for eternal union with God. “Till death do us part.” Their eros-love completes its purpose in time, not in eternity.

In fact, that’s the whole point of St. Aelred’s concept of spiritual friendship—it’s about “agapeic” (agape, not eros) communion that both arises from the reality of our love relationship with God and points us toward the complete and eternal realization of our union with God. It’s only through such a union with the Divine that we can experience an endless “spiritual friendship” that begins in time but lasts forever. Thus, eros has literally nothing to do with St. Aelred’s project—further, keep in mind that the framework he’s creating is for the good of his monks. He’s not writing a treatise on how conjugal love relates to spiritual friendship because his monks have already embraced the reality (celibacy for the sake of the kingdom) that the marital sign is pointing toward.

This eternal perspective on genuine and spiritual friendship also has nothing to do with forming “exclusive” relationships with other persons; the New Homophile acceptance of “chaste, gay couples” is clearly excluded from what St. Aelred says. “Friendship is that virtue, therefore, through which by a covenant of sweetest love our very spirits are united, and from many are made one,” he writes. The union that is “spiritual friendship” must yield to the heavenly union of “spiritual friends” that comprises the entire Mystical Body of Christ. The only exclusive I/thou reality in heaven is between God and me in the Beatific Vision. Spiritual friendship is about the all, not the “couple”:

If one were present …whom you loved as yourself and by whom you would not hesitate to be equally loved, would not everything that previously seemed bitter turn sweet and delicious? … Isn’t it true that the more friends you possessed of that kind the happier you would consider yourself? … This is that great and wonderful happiness we await. … The true and eternal friendship that begins here is perfected there. Here it belongs to the few, for few are good, but there it belongs to all, for there all are good. (Spiritual Friendship, Book Three, 78-80)

What “Spiritual Friendship” is Not

So, what about the “vowed friendships,” solemnized by publicly professed vows culminating in the Eucharist, for same-sex “friends”? The New Homophiles are proposing that two people with SSA should be able to publicly vow lifelong commitment to one another, within their Church communities.

St. Aelred’s writing doesn’t support this notion, for two main reasons. First, we’ve just noted that “exclusivity” is not a feature of spiritual friendship. Second, as mentioned above regarding the temporal vows of marriage, spiritual friendship has to do with a union, in Christ, that is endless rather than earthly. Making a vow of friendship is superfluous to the meaning St. Aelred actually gives to spiritual friendship, which is already by nature an everlasting bond, if authentic. Plus, it would be presumptuous for two persons to try to make and extend such a vow to apply to eternity (what if both of you don’t end up in heaven?). No, spiritual friendship is not about nuptial or family bonds—nor would it seem possible that St. Aelred would have viewed exclusive friendship vows as being in any way compatible with the vows the monks themselves take in order to form the broader monastic community.

In conclusion, St. Aelred deserves to have the rubric of “spiritual friendship” returned to him, unaltered. If you want to be “spiritual friends” with someone, whether you have same-sex attraction or not won’t make a difference. Just do what St. Aelred did: set aside everything that is carnal or worldly; seek spiritual progress toward Christian perfection and intimate union with the Divine; and prayerfully choose, test, and accept those others who have done similarly, with whom you can experience the spiritual heights of “love of neighbor” both in this life and the next.

Then, and only then, will you really have the beginning of a beautiful—and spiritual—friendship.