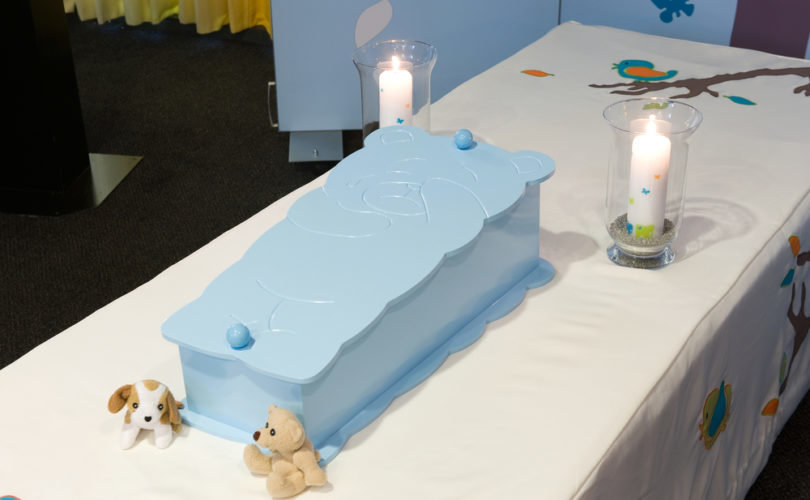 Oct. 17, 2013 (UnmaskingChoice) – Writing about my home land is something I have generally refrained from doing since I moved to Canada several years ago. Despite the fact that I am deeply concerned about the Netherlands’ moral decline, there’s something irritating about people criticizing their country of origin from across the ocean after they emigrate. But sometimes an event hits home in a way that is worthy of being written about—such as the funeral of a child. The loss of a little one cannot be fathomed by those who haven’t experienced it, yet we can all feel sympathy and sadness. However, when I heard about my friend’s co-worker in the Netherlands who had to bury her child, I felt angry most of all. Why, you ask? Because the child didn’t die a natural death—he was aborted.

Due to a positive prenatal diagnosis of a disability, the parents opted to “terminate,” then had the audacity to announce “with regret” that they weren’t able to provide the baby with the life he deserved. In other words, they had him killed, then put his tiny body in a dainty little coffin and covered it with sand in an effort to create the illusion that his life was truly valued.

Without any probing, a Dutch and newly pregnant family member brought up this very issue over the weekend. With her first ultrasound, the gynaecologist apologetically asked her to decide during the same visit what she would do if the child had Down’s syndrome. If she was unsure or expressed preference for abortion, testing would have started immediately. While her tiny embryo was already called a child by medical personnel, ending his or her life was referred to as “terminating the pregnancy.”

But it gets worse. A simple internet search shows that most Dutch hospitals, on their websites, accept this as the new normal. Some even recommend induction over suction curettage abortions, as this allows parents a better opportunity to “say farewell to the child” in its final moments. The “a-word” isn’t mentioned once—after all, the only thing that happened was the forced birth of a child who wasn’t able to survive outside the womb yet. Barely an abortion, right?

Wrong! An elective abortion is an action that brings about the death of the embryo or fetus who was previously alive. Call it what you want, but when a woman’s labour is induced to cause birth, while knowing that the child cannot survive that process yet, by its very definition, that is an abortion. When parents with “a preference for fetal death prior to birth” are offered a lethal injection into the fetal heart to give them a more peaceful experience when the child is “still-born,” who are we kidding? That’s an abortion. And when you force your baby to leave the place where she is naturally supposed to be, then watch her struggle to survive with tiny, undeveloped organs to finally succumb to her pre-term birth, don’t speak of a compassionate choice for a child that couldn’t live. It’s no different than saying a child died by drowning when in reality, you pushed him into the canal, knowing he couldn’t swim.

For some reason, this beautifully packaged way of killing imperfect children seems even worse than the decapitation, dismemberment, and disembowelment of similar children in Canada. At least when we see the latter, we recognize it as injustice. But when Dutch gynaecologists describe induced, pre-term birth as the most desirable way to get rid of one’s offspring—because “it causes no harm to the uterus” and “does not require anesthesia”—and counselors describe how meaningful a funeral or cremation can be to symbolize the life of the lost child—never mind that our actions actually killed it—something is utterly wrong.

Oh, I know what some of my critics will say. I don’t understand the difficulty of raising a child with special needs, despite my previous job of working with these precious people who gave me some of the most challenging and most beautiful moments in my life. Yes, I’ve seen how difficult this can be but when people claim that “terminating” was necessary because they couldn’t provide the child with the life he or she deserved, it’s a lie. What they mean, is that having a child with special needs would prevent them from having the life they think they deserve first of all. It’s murderous narcissism which feeds off the blood of our very own offspring in order to sustain itself, targeting the most vulnerable ones of them, at that.

Thankfully, there are also those who defy this deathly development. The Upside of Down foundation, for instance, seeks to create more understanding, acceptance, and awareness in Dutch culture by highlighting the positive side of Down’s syndrome through stunning photography. And like others who value life, my relative declined further testing. “I can’t think of any reason not to have a child with Down’s syndrome or any other disability,” she said. “Of course it would change our life, but likely, for the better. Because control over our own lives has become so essential that we need to be reminded that it is an illusion.”

Last year, Dutch magazine Linda published the story of a family with a (then) 8-year old son, who has the mental capabilities of a 3-year old due to a rare chromosomal disorder that also leaves him unable to walk. His mother, Annemarie, described the ups and downs of their life, including the painful questions from people wherever they go, asking why Job’s disability hadn’t been detected on ultrasound, and whether they had made a conscious decision to let such a child be born. Our Dutch moral climate is now such that parents have to defend the decision to let their disabled child live, with the default being the choice to have the child killed.

Annemarie is honest. If they had known during the pregnancy, she says, “My boyfriend and I probably would have said, ‘Nothing for us, a handicapped child. Get rid of it.’ We were fond of our careless life, our career plans, our wealth of freedom.” But their perspective has changed. Annemarie speaks of a world she didn’t know prior to her son: the patience of his aides, the passion of his teachers, and the way in which Job’s vulnerability has softened her and everyone around them. Having fully accepted their son, serving him every single day, this Dutch family has found incredible meaning in a previously unimaginable situation.

Their story, contrasted by the choice to end a child’s life, highlights an important lesson that is often missed, both in Canada and the Netherlands. In our day and age, we may be able to eliminate those that limit our quest for joy, even doing so in the name of “choice” and “compassion,” but happiness isn’t obtained by being focused on self. Rather, it is found when we accept all people as equally valuable and begin to put others first.

As Job’s mother, Annemarie, writes, “In eight years my sadness has become my greatest joy.”

Reprinted with permission from The Bridgehead, the blog of the Canadian Center for Bioethical Reform.