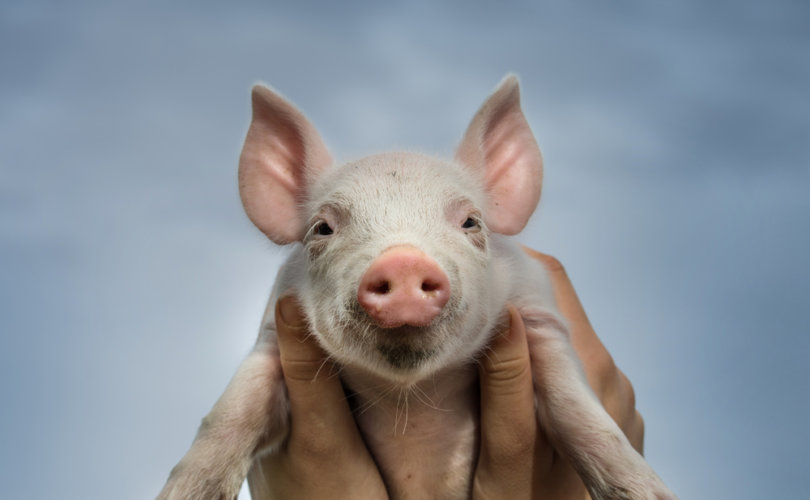 August 23, 2016 (BreakPoint) — One hundred and twenty years ago, H.G. Wells wrote a novel, “The Island of Dr. Moreau,” about what happens when a scientist, in a mad pursuit for knowledge, creates human-animal hybrids. In a word—what happens is chaos. Wells called the book “an exercise in youthful blasphemy.” He may have said the same about the National Institutes of Health today.

The NIH, under the leadership of professing Christian Dr. Francis Collins, is proposing lifting a ban on taxpayer funding of experiments that splice human stem cells with animal embryos, creating human-animal chimeras.

Proponents, of course, downplay any ethical concerns related to creating new life forms using human genetic material—for either the humans or the animals involved. They’re committed to the practical benefits of this kind of research, hoping to create animal models of human diseases in order to prevent and treat illnesses. A more ambitious goal is the production of sheep, pigs, and cows with human hearts, kidneys, livers, and pancreases to use in transplants. Proponents assure us that additional restrictions and ethics panels will prevent hybrid horrors, or chimeras, with too-human brains or with the capacity to breed.

“It's very, very welcome news that NIH will consider funding this type of research,” says Pablo Ross of the University of California, Davis. “We need funding to be able to answer some very important questions.”

However, if you think such research crosses a moral Rubicon, you wouldn’t be alone. Rod Dreher summarized what is happening in an article with the somewhat hyperbolic title, “Christian-Run Agency Embraces Pig-Man.” “It’s pretty clear,” Dreher wrote, “that this is just a prelude to something that’s a fait accompli. Besides, who is going to stand in the way of Science™ over a trivial matter like basic human dignity?”

This ends-justify-the-means kind of commodification of human beings is nothing new. Chuck Colson warned way back in 2007, “the system is being rigged to promote more such experimentation, not less. Compared to promises of ‘miracle cures,’ national prestige, and, of course, big money, human dignity counts for very little.”

Of course, promises of such cures may sound like a service to the cause of human dignity, but the “scientific progress at any cost” sort of vision drives our current forays in medicine. It’s what might be called the scientific illusion, the idea that because we can, we should. That all things, human nature included, are proper subjects of scientific mastery, the ultimate source of all of our knowledge.

Before Chuck, C. S. Lewis warned of such folly in his masterful book “The Abolition of Man.” “If man chooses to treat himself as raw material,” Lewis wrote, “raw material he will be, not raw material to be manipulated, as he fondly imagined, by himself, but by mere appetite, that is, mere Nature, in the person of his de-humanized Conditioners.”

So what do we do? First, we have to read up. At BreakPoint.org we’ve compiled the information you need to get up to speed. Second, pray up. Pray that our national leaders would acquire and apply godly wisdom in all their difficult decisions regarding science and the general welfare. And pray that God will continue raising up godly and courageous men and women who can powerfully articulate a compelling Christian vision of human dignity—including some who will enter the mission field of biotechnology.

And finally, we must speak up. The NIH is accepting public comments on this proposed “rule change” through September 6. Click here to express your concern. Let’s tell them that we don’t need a real life island of hybrids and horrors.