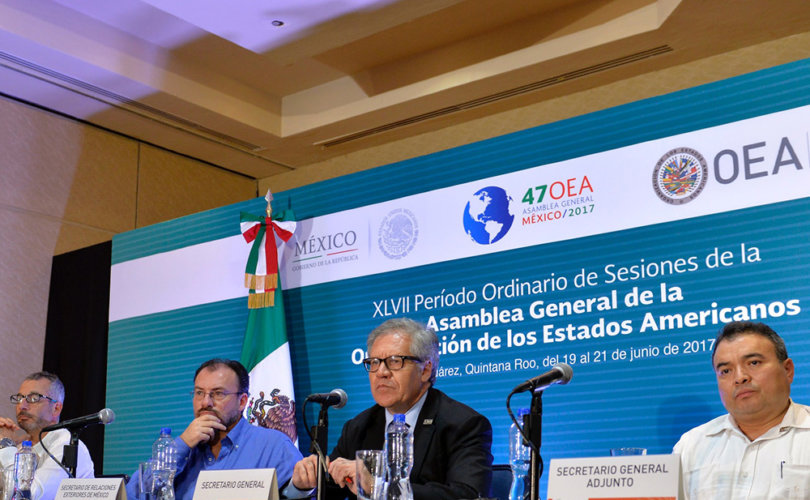 CANCUN, June 23 (C-Fam) – Latin American countries pushed back this week against further promotion of gender ideology in a resolution at the Organization of American States (OAS).

On Wednesday, the forty-seventh General Assembly of the OAS adopted the annual resolution “human rights, sexual orientation, gender identity and expression” as it has since 2008.  At the same time, however, it thwarted attempts to advance the protection of “sexual rights” further.

Unable to reach a consensus on this resolution at the OAS headquarters, member States held heated negotiations in Cancun.

The 2017 proposal went beyond any previously agreed-upon language, and beyond international law. It mentioned “individuals with intersex traits” as a new protected category and called for condemnation of undefined “homophobia and transphobia.”

Paraguay and Jamaica explained their refusal to adopt the resolution, citing national laws and constitutions. They proposed alternatives in order to reach a consensus; the “LGBTI core-group,” however, would not compromise.

Luís Carlos Garcia Escobar, representative of the Permanent Mission of Paraguay to the OAS, lamented the unwillingness of the sponsors of the resolution to modify the new text in any way so as to make it acceptable to all. “Instead of working to create consensual documents, we are left with adhesion agreements,” he explained. “We are worried with this dynamic,” he said.

For the first time since 2008 pro-family states did not bend to the pressure of LGBTI advocates. On the last day, consensus was reached on adopting last year’s resolution. Reservations on the whole text came from Paraguay, Jamaica, Guatemala, Suriname, Saint Lucia, Trinidad and Tobago, and Barbados.

Following adoption by the General Assembly, the Canadian Ambassador defined the result as “a missed opportunity.”

Sarah Flood-Beaubrun, Saint Lucia’s Minister of External Affairs explained her country’s position, saying “Saint Lucia cannot commit to any provision that undermines the institution of the family, or that may lead to the creation of controversial ‘sexual rights’ that may conflict with the rights of children and their families.”

Flood-Beaubrun reminded the room that international binding provisions protect the family as “the natural and fundamental unity of society,” and stressed her own country’s duty to protect it, and to protect the children.

The pro-family advocates from the Americas had hoped that the resolution would go to a vote, which was expected to be close, but they were bolstered nonetheless by the result, which came on the heels of other recent victories.

On June 15, hundreds of legislators from the Americas met in Mexico City where they released a declaration, signed by more than seven hundred politicians, explicitly denouncing OAS attempts to disregard sovereignty and to reinterpret international law through an ideological lens.

The Declaration calls on the Inter-American Human Rights’ Court and Commission to respect the family and the right to life from conception. It condemns abortion, and reiterates there is no right to same-sex unions, marriage, or to homosexual adoption in international law.

Another event bolstering pro-life advocates at the OAS General Assembly was the warm reception delegates gave to a presentation by Andrea Flores, a twenty-six year old woman affected by spastic brain paralysis.

As a member of the civil society, Flores delivered a statement to the OAS’ Heads of States, on Monday.

She condemned what she calls “true discrimination”—that of disabled children that begins in the womb and continues throughout their lives. The room, including OAS bureaucracy, fell in love with her.