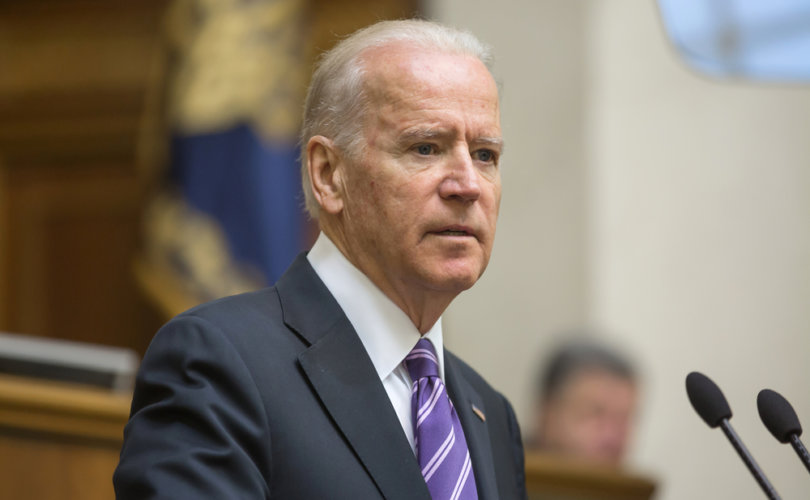 This year, as Notre Dame prepares to confer an honor on Vice President Joe Biden, the silence from the Catholic hierarchy is deafening.Drop of Light / Shutterstock.com

May 3, 2016 (CatholicCulture) — In 2009, when the University of Notre Dame invited President Barack Obama to deliver a commencement address, dozens of American bishops lodged loud public protests. Yet this year, as Notre Dame prepares to confer an even greater honor on Vice President Joe Biden (together with former House Speaker John Boehner), the silence from the hierarchy is deafening.

Back in 2009, Cardinal Daniel DiNardo of Houston said that Notre Dame’s invitation to President Obama was “very disappointing,”, while then-Archbishop Timothy Dolan termed it a “big mistake.” The late Bishop John D’Arcy, then leader of the Indiana diocese in which the university is located, spoke of “the terrible breach which has taken place between Notre Dame and the Church.” For the first time in his 25 years of service to the Fort Wayne-South Bend diocese, Bishop D’Arcy declined to attend the Notre Dame commencement exercises; instead he addressed a protest rally organized by pro-life students, faculty, alumni, and staff.

These prelates and others explained their dismay by referring to the statement “Catholics in Political Life,” released in 2004 by the US Conference of Catholic Bishops. In that document, the bishops reflected on the need to maintain a consistent public witness in defense of human life, and therefore to distance themselves from public officials who support legal abortion. The statement set forth a clear policy that Catholic institutions should not give public honors to “pro-choice” politicians:

By giving President Obama an honorary degree and offering him an opportunity to speak at graduation, Notre Dame clearly violated that policy. University officials could offer only garbled partial defenses, claiming that they were honoring Obama not because he supports unrestricted abortion, but because he is President of the United States.

Give credit to Bishop Kevin Rhoades, the current leader of the Fort Wayne-South Bend diocese, for raising a lonely voice of protest. “I believe it is wrong for Notre Dame to honor any ‘pro-choice’ public official with the Laetare Medal, even if he/she has other positive accomplishments in public service,” Bishop Rhoades said. But if any other bishops have joined him in that rebuke to Notre Dame, I must have missed their public announcements.

Some observers, of liberal political sympathies, have argued that it is wrong to honor John Boehner, too, because the former Speaker disagreed with the US bishops’ stand on immigration. This is a tired old argument, conflating disagreement with the bishops on a prudential political decision with defiance of Church teaching on a fundamental moral principle. But it is noteworthy that Notre Dame officials saw fit to make a joint award, no doubt in a cynical effort to dodge political criticism by choosing one honoree from each side of the political spectrum.

“We live in a toxic political environment where poisonous invective and partisan gamesmanship pass for political leadership,” said Father John Jenkins, the president of Notre Dame, in announcing the Laetare Award recipients. (Notice the pre-emptive suggestion that those who criticize the school’s choices may be engaged in “poisonous invective.”) He went on to make a tortured argument that although Notre Dame is honoring two politicians, it is not honoring them for what they have done in their political careers:

In recognizing both men, Notre Dame is not endorsing the policy positions of either, but celebrating two lives dedicated to keeping our democratic institutions working for the common good through dialogue focused on the issues and responsible compromise.

By now we all know the familiar dodges. The politician claims to oppose abortion personally, but to feel a delicate reticence about imposing his views on others. He says that we must be willing to compromise (even on life-and-death decisions). He insists that he is not “pro-abortion” but “pro-choice.”

That last bubble of rhetoric was unceremoniously burst by Cardinal Donald Wuerl of Washington, DC, when he celebrated Mass at Georgetown after Planned Parenthood president Cecile Richard had delivered a lecture there. “The word ‘choice’ is a smokescreen,” he said, “behind which those killing unborn children take refuge. Every chance you get, blow that smoke away!”

Now Cardinal Wuerl himself has a chance to “blow that smoke away.” As things stand, he is scheduled to celebrate Mass at the Notre Dame commencement, and to receive an honorary degree. He could pull out; he could absent himself from the ceremonies, to ensure that he does not become part of an event that pays homage to a “pro-choice” Catholic politician.

And there is a precedent. Back in 2009, the Harvard legal scholar (and former US ambassador to the Holy See) Mary Ann Glendon was chosen to receive the Laetare Award. But when she learned that President Obama would be speaking, she announced her decision to decline the award. Clearly annoyed that her presence might be used to quiet the critics of the honor for Obama, Ambassador Glendon wrote that she did not want to be used as a counterweight, nor did she see the Notre Dame commencement as an appropriate venue for a genteel debate about legal abortion:

A commencement, however, is supposed to be a joyous day for the graduates and their families. It is not the right place, nor is a brief acceptance speech the right vehicle, for engagement with the very serious problems raised by Notre Dame’s decision—in disregard of the settled position of the U.S. bishops—to honor a prominent and uncompromising opponent of the Church’s position on issues involving fundamental principles of justice.

Could Cardinal Wuerl do this year what Ambassador Glendon did in 2009? Even at this late date, his withdrawal would send a powerful message of support for the right to life: an unmistakable rebuke to politicians who hide behind the smokescreen that the cardinal himself identified. To be sure, if he did withdraw, the cardinal would be caught in an avalanche of public criticism; he would suffer for his public witness. But there is a reason why cardinals wear red.

Phil Lawler has been a Catholic journalist for more than 30 years. He has edited several Catholic magazines and written eight books. Founder of Catholic World News, he is the news director and lead analyst at CatholicCulture.org. Reprinted with permission from Catholic Culture.