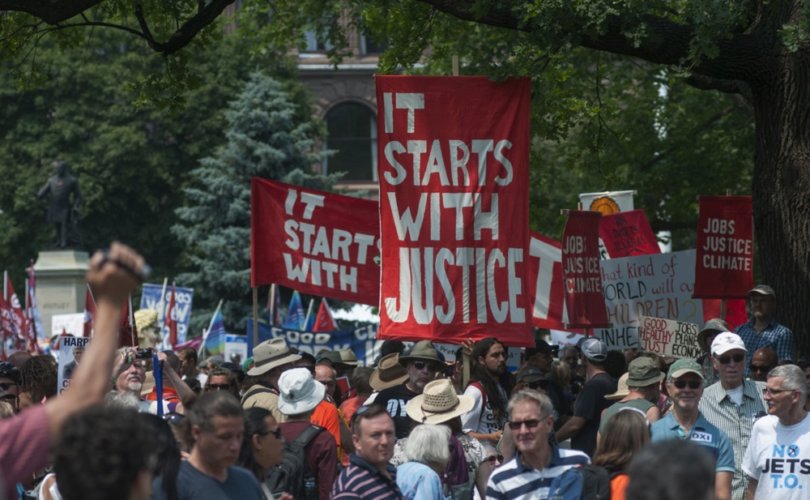 March 30, 2020 (American Thinker) — The National Association of Scholars (NAS) has produced a report titled “Social Justice Education in America.” Written by David Randall, it defines, describes, and delineates many of the destructive and deceptive ideas behind the innocent-sounding social justice programs that have mushroomed in American institutions of higher learning.

According to this December 2019 report, “in the last twenty years, a generation of academics and administrators has transformed higher education into an engine of progressive political advocacy.” Identity politics plays a major role in how social justice will be administered. Social justice activists work to increase the “state's coercive power” to decide who will get his fair share concerning employment, housing, income, health care, leisure, political power, property, social recognition, and wealth.

Consequently, social justice buzzwords such as food justice, educational poverty, and health equity aim to increase state power “to tax the citizenry to fund progressive spending priorities.” If social justice warriors deem it, then any alleged privilege must be eliminated so that “identity groups defined by categories such as class, race, and gender” will not be oppressed.

To achieve their aims, universities are watering down requirements in order to attract more women and minorities. This portends “disastrous [repercussions] for scientific innovation and American competitiveness,” not to mention the care of sick people.

Consequently, the NAS report asserts that the “social justice movement's political goals include increased federal and state taxation; increased minimum wage; increased environmental regulation; increased government health care spending and regulation; restrictions on free speech; restrictions on due process protections; maximizing the number of legislative districts that will elect racial minorities; support for the Black Lives Matter movement; mass release of criminals from prison; decriminalizing drugs; ending enforcement of our immigration laws; amnesty for illegal aliens; open borders; [and] race and sex preferences in education and employment,” to name only a few. Support for the anti-Israeli Boycott, Divest, and Sanction movement is also part of their movement, and mob violence is advocated to enforce any and all of these objectives.

Sustainability and diversity are lynchpins of social justice activism. Social justice theories “encourage teachers and students to be actively involved in … ameliorating discriminatory policies and practices.”

On the surface, this does not appear misguided, but beware the euphemistic overlay.

Why shouldn't an academic aspire to correcting perceived social ills? The nineteenth-century American land-grant universities and the European research universities were founded, after all, on the premise that knowledge helps society progress. But social justice is a different beast entirely.

The definition of social justice … is deeply political, entailing a large number of contestable claims about the causes of socioeconomic inequality. Social-justice proponents believe that those claims are settled, and woe to anyone who challenges them on a college campus. There are, however, alternative explanations — besides oppression and illegitimate power — for ongoing inequalities, taboo though they may be in academia.

Mac Donald asserts that “social-justice education is merely a symptom of an even deeper perversion of academic values: the cult of race and gender victimology, otherwise known as 'diversity.'”

How do social justice warriors operate? They maintain that “[a]ny act of self-discipline or deferred gratification that contributes to individual and generational success is now simply a manifestation of white supremacy.”

In fact, Mac Donald explains that “[d]ue to the diversity imperative, medical schools admit black students with MCAT scores that would be automatically disqualifying if presented by a white or Asian student. Their academic performance is just what one would expect. Time to lower standards further. An oncology professor at an Ivy League medical school was berated by a supervisor for giving an exam in pharmacology that was too 'fact-based.'”

Racial preferences were de rigueur under the Obama administration. Trump has revoked many of Obama's admissions guidance to colleges, much to the fury of activists.

Mac Donald goes on to explain:

The ultimate social-justice solution to the skills and behavior gap is to remove the competition entirely. From the moment children enter school, they are berated for their white heteronormative patriarchal privilege if they fall outside a favored victim group. Any success that they enjoy is not due to their own efforts, they are told; it is due, rather, to the unfair advantages of a system deliberately designed to handicap minorities. Teachers are now advised to ignore white male students[.]

History continually shows that “[t]he distortion of language by any means is to obfuscate, deny, and sometimes to create blind worship of fallen idols.” Yet social justice warriors have created an entire jargon that includes experiential learning, civic engagement, and community engagement. As David Randall explains, “[e]xperiential learning is both a camouflaging euphemism and a marker of social justice education.” In fact, “[e]xperiential learning, as service-learning, was founded in the 1960s by radical activists who wanted to commit participants to progressive activism by 'consciousness raising' propaganda, and to divert university resources to support progressive nonprofit organizations. Experiential learning's models include agricultural extension schools; internships; education theorist John Dewey's emphasis on learning by doing; 'civil rights schools' formed in the Civil Rights struggle of the 1950s and 1960s; the revolutionary pedagogy of Paolo Freire; and Maoist China's Open Door Schooling.” But, as Randall asserts, “experiential learning courses, dedicated outright to progressive activism, drop all pretenses that teachers and students are engaged in the search for knowledge.”

It is now commonplace that academic job advertisements stipulate a commitment to social justice. Thus, diversity statements that ask “job applicants [to] address how they can contribute to a culture of inclusion and equity within the campus community have become so common that colleges now provide standardized advice on how to compose them.” But as “Jeffrey Flier, the former dean of Harvard Medical School, politely notes, terms such as diversity and equity are 'ambiguous,' and … these statements could be interpreted as requiring affirmation of critical race theory, along with corollaries such as 'structural racism', white privilege and supremacy, microaggressions, economically driven power relationships, and intersectionality.”

As the National Association of Scholars' report asserts, “[t]he more alarming truth is that these statements will be interpreted as requiring an affirmation of all these aspects of social justice theory.”

Hence, “[c]ommitments to social justice, diversity, and equity are rapidly becoming an explicit prerequisite for all university employment.”

The report concludes that “American colleges and universities should dedicate themselves to a complex of linked goals: vocational training, the transmission of Western Civilization, character training, fostering virtuous citizenship, and the untrammeled search for truth. Universities devoted to social justice (a) hobble vocational training; (b) cripple the transmission of Western Civilization; (c) redefine character training as social justice propaganda; (d) redefine fostering virtuous citizenship as social justice activism; and (e) replace the academic's search for truth with the activist's search for power.”