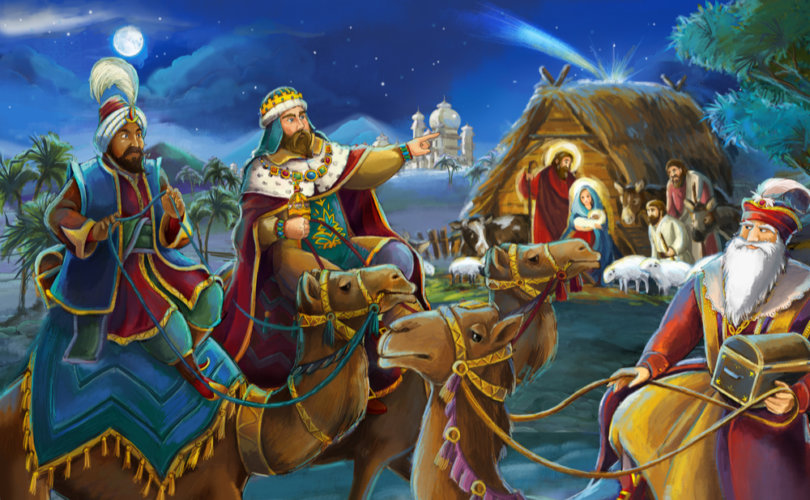 January 21, 2021 (LifeSiteNews) — The 2020 presidential election was a clash of deeply held and dramatically contrasting political/philosophical views. It was a turning point, a clash between two very different visions of the nation’s future.

The Church today celebrates Epiphany, a feast recalling another great turning point that had vast implications, political as much as religious.

In the Gospel story (Matthew 2), King Herod was much disturbed by the arrival of three distinguished sages, or “wise men,” who had come in search of a prophesied “New King.” It’s easy to understand his anxiety. The King these dignitaries (whom we call “Magi”) were seeking wasn’t him.

Moreover, their journey from realms far away had great symbolic significance. It indicated how widespread and important the prophecy was. And this fact did not bode well for the staying power of Herod’s regime.

Today, we know that Jesus was more than just a contender for a worldly throne. The ruthless Herod probably could have dealt with that, as he’d dispatched other potential rivals, including members of his own family.

In fact, the coming of Christ suggested something far more than “regime change.” It was the beginning of what today we would refer to as a “New World Order.” And it involved a profound change in how people thought about their lives, about their relationships to other people, and their relationship to God.

It also gave us the Church, which was intended both to preserve Christ’s teaching and to provide a system for spreading it throughout the world.

History has recorded other occasions when new ideas have burst onto the scene. The French Revolution was one. Reflecting the influence of Freemasonry, it proclaimed “liberty, equality, and fraternity.”

Exalted words like these stir our longing for justice, and thus become goals toward which people might strive. Unfortunately, the pursuit of such lofty ideals at the political level has often caused much suffering and injustice — not to mention death on a monumental scale.

Nowadays, “liberty, equality, and fraternity” are interpreted in somewhat different ways: as “openness, welcoming, and diversity.”

More current and fashionable (or, as it’s said, more “politically correct”), these have a vague appeal, and so can be used by clever politicians to influence attitudes, manipulate public opinion, and accumulate power.

At bottom, however, they’re too ephemeral. They lack substance and durability. Trying to apply them in tangible ways, to bring about actual improvements in life, is like trying to catch smoke.

Jesus’ teaching — his “platform,” if you will — is the only effective formula for positive change. That’s because it’s based not on politics, but on compassion.

But even compassion, of itself, is not adequate for improving society. Political scientist James Q. Wilson pointed out in his 1993 book, The Moral Sense, that compassion is strongest in the immediate circle of the family. It decreases the farther out we proceed. This means that mere goodwill toward others — what we might call the “bond of common humanity” — is too general and diffuse to encourage true compassion for those with whom we have no direct connection.

The only way we can even approach true compassion for other than our own family members is by accepting Jesus as our King. This acceptance joins us to all other believers throughout the world. Christ’s love becomes our common bond to humanity, giving substance to our longing for unity, and making us into one family in Him.

It’s impossible to know if the Magi’s visit sparked some insight within Herod that this love was what the wise men were searching for. If so, his subsequent attempt to kill off all the male children in the age group of this New King certainly would suggest he didn’t take that insight to heart.

But it could explain his anxiety.

Herod was a man totally devoted to power politics. And the politics of the Magi — the politics of love — was something foreign to him. It likely would have frightened him.

Unfortunately, so it is with too many of our leaders today.

The results of Georgia’s run-off election raise the specter of a new Herod. If Joe Biden is confirmed in office with Democrats in control of both Houses of Congress, Christ’s teaching and those who adhere to it will surely be facing a new challenge.

Pray for new wise men who may once again find the source of true compassion.