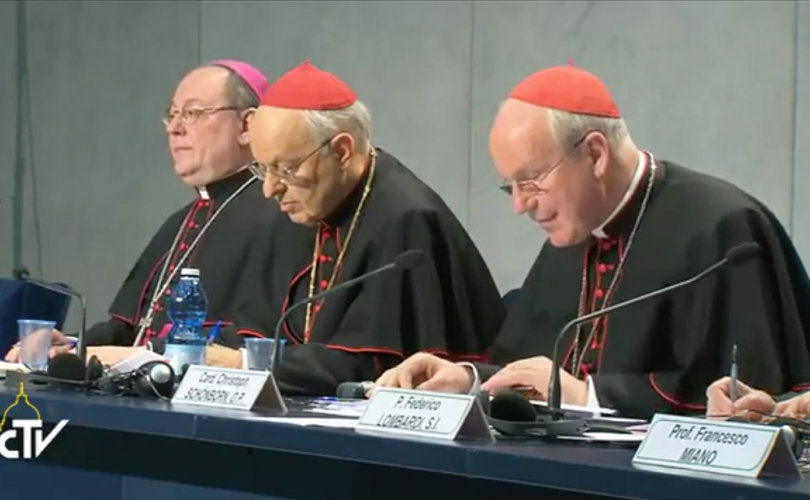 April 8, 2016 (catholicculture.org) —Amoris Laetitia is not a revolutionary document. It is a subversive one.

Pope Francis has not overthrown the traditional teachings of the Church, as many Catholics had either hoped or feared that he would, in this post-Synod exhortation. Instead he has sought to carve out ample room for a flexible pastoral interpretation of those teachings, encouraging pastors to help couples apply general moral principles to their specific circumstances. Unfortunately, the net effect of the Pope’s approach will very likely be an acceleration of an already powerful trend to dismiss the Church’s perennial teaching, and therefore a decline in respect for the pastoral ministry he hopes to encourage.

There is a great deal of sound spiritual guidance in Amoris Laetitia. Particularly in the two central chapters that the Pope himself identifies as the core of his message, Francis shows his true character as a pastor: encouraging, guiding, questioning, cajoling, sympathizing, instructing, helping readers to gain a deeper appreciation for the Church’s understanding of sacramental marriage. He upholds the ideal of Christian marriage, recognizes that no fallen human lives up to that ideal, and offers the support of the Church to all those who are willing to continue the lifelong struggle to grow in love.

Moreover, the Pope recognizes, and clearly states, that the Christian understanding of marriage is the only reliable antidote to a host of ills that plague contemporary society, especially in the West. Particularly in the 2nd chapter of Amoris Laetitia, he rightly insists that at a time when marital breakdown has reached epidemic proportions, Catholics must not allow themselves to be deterred from delivering the message that our society needs to hear—even while he recognizes that the message is unpopular, and those who proclaim it may face mounting hostility. There are even a few echoes of the “culture wars” in this apostolic exhortation, as Pope Francis unequivocally confirms the Church’s stands on abortion, contraception, divorce, homosexuality, and same-sex marriage.

Unfortunately, those aspects of the papal document—its greatest strengths—are not the topics that will command public attention. As the early news coverage already illustrates, readers will focus primarily a single question: whether the Pope has opened the door for divorce-and-remarried Catholics to receive Communion. Although it is unfortunate that a rich and complex message is being reduced to a single issue, this single-minded coverage is not simply the fault of the mass media. Pope Francis has himself to blame.

First, because Amoris Laetitia is much, much too long. Not many readers will plow through the 250 pages, the nine chapters, the 325 paragraphs. By putting out such a prolix document, the Holy Father increased the power of the interpreters who will be boiling down the message for their readers—and who will, for the most part, focus on that single issue.

Second, because the discussion of Communion for divorced/remarried Catholics, which has commanded so much attention over the past two years, was explicitly encouraged by Pope Francis. It was the Pope who offered Cardinal Walter Kasper an opportunity to address a conclave of cardinals, introducing “the Kasper proposal,” and setting the stage for the exhaustive debate on that proposal during two meetings of the Synod of Bishops.

To this day we do not know exactly what “the Kasper proposal” entailed. The German cardinal proposed a “penitential path” by which divorced/remarried Catholics might be guided back to full communion, but he did not specify what that path would be. Similarly, even after the release of Amoris Laetitia, we do not know exactly what Pope Francis has in mind for couples in irregular unions, aside from a flexible and sympathetic pastoral approach.

The Pope argues that in providing spiritual care for couples in irregular unions, pastors should adapt the general principles of Church teaching to the couples’ particular circumstances. “It is,” he writes, “a matter of reaching out to everyone, of needing to help each person find his or her proper way of participating in the ecclesial community and thus to experience being touched by an ‘unmerited, unconditional and gratuitous’ mercy.” Thus far the argument is unassailable. But in what cases would the pastor be justified in telling a couple that they should not feel bound by the rules of the Church? What sort of concrete circumstances would justify a break from the rule—enunciated by Jesus Christ—that someone who leaves one spouse to live with another is engaged in an adulterous union?

There are, certainly, some circumstances in which the Church condones remarriage. If a first marriage is annulled, the parties are free to remarry; and Pope Francis has streamlined the procedures for annulment, making it less likely that anyone who should receive an annulment is denied. Or as St. John Paul II taught in Familiaris Consortio, a divorced/remarried couple may be admitted to Communion if they agree to live as brother and sister. It is revealing that in his lengthy apostolic exhortation, Pope Francis never mentions this possibility: that a couple could demonstrate their commitment to the faith by abstaining from sexual relations. That particular “penitential path,” the suggestion traditionally offered to Catholic couples in irregular unions, seems no longer to be considered worth discussing.

It is no secret that in some parts of the Catholic world, priests and pastors have already quietly encouraged divorced/remarried couples to receive Communion, the Church’s clear rule to the contrary notwithstanding. Insofar as Amoris Laetitia tends to further this practice, the Pope’s vague guidance undercuts the universality of Catholic teaching and discipline. As Robert Royal points out, the German bishops have announced that they are ready to offer Communion to divorced/remarried couples, while the bishops of neighboring Poland are adamant that they will not. Royal remarks:

On one side of a border between two countries, Communion for the divorced and remarried would now become a sign of a new outpouring of God’s mercy and forgiveness. On the other side, giving Communion to someone in “irregular” circumstances remains infidelity to Christ’s words and, potentially, a sacrilege. In concrete terms, around the globe, what looms ahead is chaos and conflict, not Catholicity.

Pope Francis downplays the importance of such conflicts in his apostolic exhortation. He argues that “not all discussions of doctrinal, moral, or pastoral issues need to be settled by interventions of the magisterium.” True enough. But when the magisterium does enter into the debate, it is vitally important that that intervention should be clear. The Pope is a pastor, to be sure. But he is also a teacher—particularly when he is issuing an apostolic exhortation—and a teacher should be clear on matters of principle.

Did the Pope even say that divorced/remarried Catholics could receive Communion? Remarkably, that question—THE question—remains in dispute. Buried in a footnote (#351) is the suggestion that the pastoral support offered to these couples “can include the help of the sacraments.” Yet Cardinal Christoph Schönborn of Vienna, who had been sympathetic toward the Kasper proposal, told Vatican Radio that it was “very clear” that the Pope was speaking about the Sacrament of Reconciliation, not the reception of the Eucharist, in that much-discussed footnote.

Unfortunately, Cardinal Schönborn’s caveat, like much of the Pope’s own message, will be lost in the discussion of Amoris Laetitia. Inevitably, as it is received by ordinary Catholics in the pews, the Pope’s message will be understood only in a simplified form: as a green light for the divorced/remarried to receive Communion. Priests who are already all too willing to accommodate the wishes of divorced/remarried Catholics will be confirmed in their attitudes. Those who want to demand more—the conscientious pastors who would be most likely to help Christians grow in holiness– will be isolated and undermined.

For readers looking for more analysis of the papal document, here are several early reactions, representing a variety of contrasting viewpoints. I do not agree with all of these commentators; I did find their analyses helpful as I developed my own thoughts.