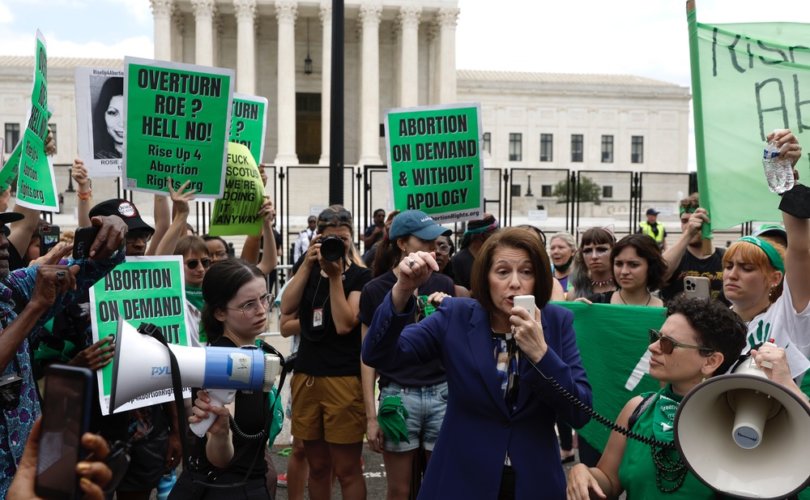 (Priests for Life) – Wow. When I read the dissenting opinion of Breyer, Sotomayor and Kagan in the Dobbs case, I felt pity for them.

You would think that Supreme Court Justices could do better … like maybe making Constitutional arguments.

But they failed miserably. Then again, so did the cases they were defending, Roe and Casey.

In those cases, the Court overstepped its proper role.

They did what you would rightly expect legislators to do, and what legislators are far more capable of doing, that is, they drew policy lines.

Roe said the state can’t interfere with the abortion decision in the first trimester. But no Constitutional justification was given for drawing the line there.

Roe said the state’s interest in protecting the woman’s health becomes compelling in the second trimester. But no Constitutional justification was given for drawing the line there.

Roe said the state’s interest in protecting fetal life becomes compelling in the third trimester. But no Constitutional justification was given for drawing the line there.

Casey threw out the trimester framework but drew the line at viability, saying the state could not protect the unborn prior to that. But no Constitutional justification was given for drawing the line there.

So is it any surprise that a dissenting opinion that tries to uphold Roe and Casey and the “right to abortion” is similarly devoid of Constitutional justification?

All that these three dissenting Justices could do was to repeat what Casey said (which is really all they could do at oral argument on December 1) and say that it was justified, balanced, and correct. But they could not say why it was Constitutional. That is where Roe and Casey failed, and that is where Breyer, Sotomayor, and Kagan failed.

They are horrified that the states can now legislate on abortion. “Across a vast array of circumstances,” they write on page 5, “a State will be able to impose its moral choice on a woman and coerce her to give birth to a child.”

They write as though law does not “coerce” us every day to make choices that are moral rather than violent.

They also write as though they totally uninformed of what has occurred these last five decades. “The legal framework Roe and Casey developed … has proved workable in courts across the country,” they write (p. 6). What judicial world have they been living in? Judges across the country have been complaining for five decades that there is inconsistency, uncertainty, and unpredictability in the ever-shifting standards that Roe and Casey have imposed.

What, for instance, constitutes an “undue burden” to someone getting an abortion? The Casey Court gave that to us as the measuring rod of the Constitutionality of an abortion-related law, but did not define it. Judges will differ in their view of what is a “burden,” what is “undue,” and what is a “substantial” obstacle.

Then the dissent goes on to say, incredibly, “No recent developments, in either law or fact, have eroded or cast doubt on those precedents. Nothing, in short, has changed.”

Wow. Ultrasound, fetal diagnosis and therapy, and fetal surgery have mushroomed after Roe said the Court could not speculate as to when human life begins.

Studies have multiplied on the damage abortion does to moms, dads, families, relationships, physical health, mental health, and generational health, and the testimonies of those who have had abortions have echoed around the world.

Laws have accommodated pregnant moms and their babies in dozens of ways, and pregnancy centers have multiplied and outnumbered abortion clinics by more than three to one.

But perhaps the saddest aspect of the dissent is that they declare, “The Court reverses course today for one reason and one reason only: because the composition of this Court has changed.”

So it’s just political, in their view.

Never mind that inventing – and trying to uphold – a right that is nowhere in the text, structure, or history of the Constitution, or anywhere in American law or tradition, is political. No, to them, that is principled and Constitutional.

But returning a matter on which the Constitution is silent to the people and their elected representatives, to take in whatever direction they discern is right – that, to the dissenters, is political.

Yes, the composition of the Court has indeed changed. But that change is precisely that now we have a majority of Justices who are no longer interested in inventing Constitutional rights that are not there.

The composition of the Court has indeed changed. But that change has brought us Justices with the integrity and humility to correct a longstanding error and to refuse to substitute their policy preferences for the will of the people.

The dissenting opinion of Breyer, Sotomayor, and Kagan leaves me sad, but it also leaves me grateful that it is a dissent and no longer the majority.

With gratitude for the great victory that has been won for the unborn, for the Constitution, and for the people, I would like to invite you to join me for a campaign of nine days of gratitude, prayer, and praise starting this Monday, July 11th through Tuesday, July 19th.

I will offer Masses, sermons, and prayer hours at 10:00 a.m. ET on our broadcast network, www.EndAbortion.TV, and on the many social media and video-sharing platforms linked from there.

Please join me for those times of prayer and worship, and add your own prayers and praise throughout these days. Please invite others to do the same. And please let me know that you’ll participate. You can also leave your own prayer intentions at www.PrayerIntentions.org.

This is a moment to celebrate and to give thanks. God has answered the prayers of countless citizens over the span of five decades. He is faithful, and our American system of government is resilient. We can correct grave errors. Let us indeed give thanks.