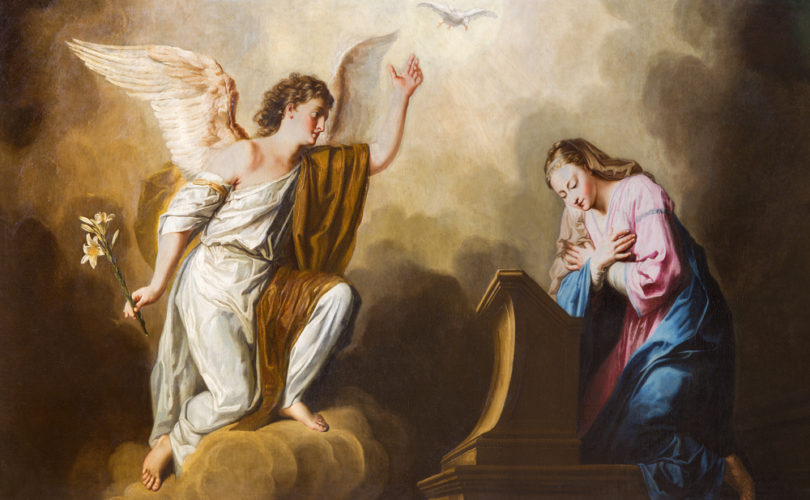 December 23, 2016 (LifeSiteNews) — Imagine. Waking up to find that your wife is pregnant … and you had nothing to do with it. And then, an angel appeared to you telling you that she carried the Hope of humanity within her and you were to name him “Jesus”. This could never have been part of any foreseeable plan for a newly married man. How would he cope with a pregnant wife and a marriage that had not yet been consummated? In a culture of undeniable (and real) gender inequality, where women were horribly stoned for adultery, he could have divorced her and publicly shamed her.

Joseph could have chosen disgrace, but he chose grace instead. He decided to be stronger than his circumstances.

Imagine. You’re a young virgin bride who has yet to intimately know your husband, and you’re told by an angel that you have been chosen to carry the Savior of the world within your womb. She didn’t plan this. But her consent triggered events that would radically change her life, her husband’s life, and … the world. How would she explain this miraculous conception to her husband? How could she even accept that something like this was even possible?

She could have chosen to reject it all. She could have justified it because the timing wasn’t “ideal” or felt that their material poverty was sufficient reason not to bring a child into this world. But she decided to be stronger than her circumstances.

Mary and Joseph lived in a violent culture under Roman rule (where infanticide was a common practice) and a ruthless appointed “King of the Jews” — King Herod — who was furious at the prospect of a child becoming the King of the Kings. Herod was a deeply unstable man who had his own family members (including his wife and firstborn son) and many others killed. He was so threatened by what the life of this humanly unplanned but Divinely planned child represented, that he ordered all male children (two years of age and younger) in Bethlehem and the surrounding areas to be slaughtered. With God’s divine intervention, Mary and Joseph escaped the brutality of a foolish King hellbent on destroying the Son of God. A devoted husband and his courageous wife had to trust each other and trust the Lord that He would guide them through this earthly unchartered journey. Their lives had purpose. Their unborn son’s life had purpose. Mary saw motherhood as a gift, not a burden. She embraced it despite all of the unknowns. And Joseph could have chosen abandonment over fatherhood, but he chose adoption instead. What an illustration of how fathers matter even when the bond isn’t biological.

Courage unleashes miracles. This Christmas, may we be reminded of the faith and vulnerability that is required in our own journeys. May we never forget that Christmas is the beginning of God’s love story for us and completed in the ultimate act of selfless love — Christ’s self-sacrifice on the cross and miraculous resurrection. May we know, in a deeply personal way, how much God loves us enough to offer eternal salvation and the opportunity to be strong, through Him, even in our weaknesses. Merry Christmas.