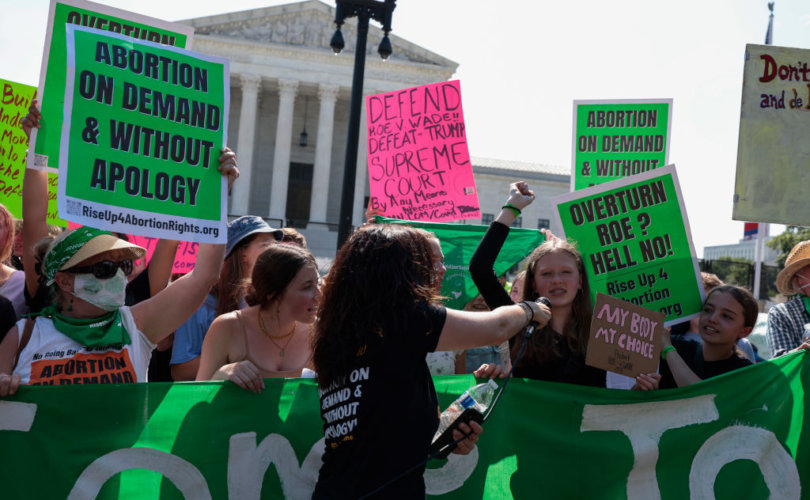 (LifeSiteNews) – If the U.S. Supreme Court bumps America’s abortion law-making back to the states, as it should, the conventional wisdom holds that the pro-life side wins.

But think again. The fight for the life of unborn babies doesn’t end with the possible demise of Roe v. Wade, the 1973 Supreme Court decision that declared abortion to be a right. Instead, a critically new stage begins.

Instead of fighting it out before the high court, the struggle would balloon to as many as 50 battlefields in each and every state. That’s not all: in each state there are three branches of government — the executive, legislative and judicial –– where the pro-life agenda can be strangled.

It could get messy—as democracy surely can. The better-funded pro-abortion brigades will contest, as they always do, every commonsense restriction, such as requiring a minor to tell her parents that she’s getting an abortion. Expect that they will try to enact their most extreme demand: elective abortions up to and through the moment of birth, or even apply this astonishing assertion by ethicist Peter Singer ­– that for twenty-eight days after birth, it’s morally acceptable in certain circumstances to kill a child.

That’s why it’s doubly important for pro-life advocates to ensure the integrity of state and local elections.

The challenge for the pro-life movement is to corral the people, money, resources and, most of all, the energy to take this contest to every corner of America. Especially understanding that pro-abortion organizations, like Planned Parenthood, can raise vast sums — double, triple and perhaps even more — than pro-life forces can. The challenge, now ever more critical, is to protect established voting laws and procedures that progressives routinely challenge. The fight will require heroic efforts.

I’ve seen it all firsthand, as an attorney exposing the gamesmanship of the 2020 election in multiple states. Don’t even begin to think that the abortion industry won’t deploy the same, well-funded tactics to legalize the “termination” of the most innocent and unprotected lives. Well-financed Planned Parenthood wasted no time in suing Lubbock, Texas, after voters in a referendum election outlawed abortion within the city, 62 percent to 38 percent. A judge dismissed the lawsuit.

Consider how governors and the executive branch, who have a constitutional obligation to enforce the laws, can stymie unborn babies’ protections, sitting on their hands, refusing to enforce pro-life laws. For example, in 1995, Illinois enacted popular legislation requiring that a pregnant girl under 18 notify a parent or guardian before having an abortion—an invasive and serious surgical procedure. Parental consent was not required, insisted abortion supporters, making it a weaker law.

Lawsuits were filed, one claiming a provision of the act was unconstitutional. What followed was an astonishing nineyears of judicial hearings, injunctions and appeals. For nine years an enacted law was not enforced, as if it never was on the books. Finally, with the aid of the Thomas More Society, the Illinois Supreme Court gave the law a green light. But the light turned red late last year, when a Democrat majority in the state legislature repealed the law.

Similar stalling and destructive possibilities are endless, and are as varied as each state. If a constitutional amendment is required to protect life in a state, the question might be put to voters in a referendum. But a pro-life ballot question, crafted by an abortion-supporting secretary of state, could be rigged. For example, it could be worded in such a confusing manner as to turn a “yes” vote into a “no.” Assuming, of course, that enough signatures on the petition drive calling for a referendum were left, without being tossed out for minor technicalities – or no technicalities at all – by a partisan election commission.

None of this is unheard of. In multiple states, for example, I represented plaintiffs in pre-2020 election lawsuits asserting that “Zuckerbucks” privatized certain elections with a liberal billionaire’s money. To wit, the leftwing Center for Tech and Civic Life, pumped millions into effort, thanks to donations by woke Facebook CEO Mark Zuckerberg and his wife, Priscilla Chan. The privately funded efforts included legally unauthorized absentee ballot drop boxes in Wisconsin.

The result has been 21 states banning or regulating Zuckerbucks since the 2020 election. There would be more except pro-abortion Governors in Michigan, Pennsylvania and Wisconsin have vetoed legislation banning Zuckerbucks.

Every abortion “restriction” in every state can expect judicial, administrative and legislative attacks by the multi-billion-dollar abortion industry and their pawns, like the ACLU. Waiting periods, parental consent and “heartbeat” provisions will be targeted. You can be certain that the 13 states that have enacted pro-life laws to take effect after Roe is overturned will be energetically targeted.

Other states have passed laws preserving Roe. Illinois, for example, passed the deceptively labeled Reproductive Health Act, echoing the most extreme pro-abortion agenda: Elective abortion at any time for any reason. Ironically, even the Roe justices might have found this law to be unconstitutional.

It is now incumbent for pro-life fighters to become experts in their state election laws and constitutions and their political party’s workings. They must identify influential allies and like-minded life advocates. They will have to get to know the ins and outs of complex election procedures, cultivate media contacts and more. They will need to hone not one, but multiple ways, to influence the election process, raise money, and organize “boots on the ground.”

This new environment will seriously test our commitment to life. If you are not already studying and strategizing about how to succeed, you are already dangerously behind.

Erick Kaardal is a Minnesota attorney who concentrates in election law and is special counsel with the Thomas More Society.