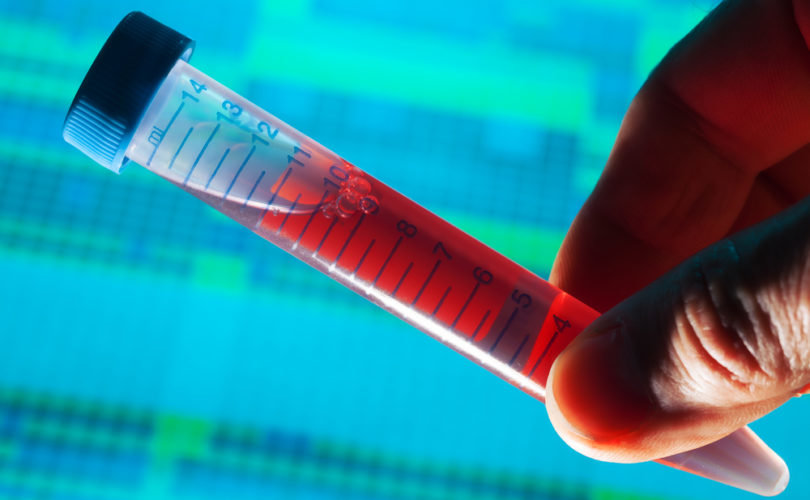 March 19, 2015 (LiveActionNews.com) — Three years ago, my life was changed forever. My son, Wyatt, was diagnosed with Down syndrome after I underwent an amniocentesis. It was one of the most difficult things I’ve experienced, but after the normal period of grieving and adjustment, I was able to accept the diagnosis. I never imagined I would be here again.

My husband and I are expecting our fourth child, a little girl named Clara, in July. Having had one child with Down syndrome, I am at higher risk for having another, which means I’ll be monitored closely throughout the pregnancy. Because my nuchal translucency screening came back negative, I chose to forgo another amnio. This time, I got one of the new prenatal blood tests instead. I knew they were not as reliable as they advertise, but I reasoned that if it came back positive, I would get an amnio again to confirm it. And besides, I had a child with Down syndrome. I knew what to expect this time. I wasn’t worried about having another baby with Down syndrome — if she had it, then no big deal. So I got the Progenity blood screen, and went along my merry way.

Well, the test did come back positive. But it wasn’t positive for Down syndrome. It was positive for Turner Syndrome. I had never heard of it before, so this meant doing some research. Turner Syndrome is a very rare condition that affects only girls, and occurs when part or all of one of the two x chromosomes is missing. While not considered a disability, it does come with risks, such as heart defects, endocrine disorders, and kidney malfunction. Girls with Turner Syndrome are almost always infertile, as well. I felt like I had been punched in the gut. The odds of a person having a baby with Down syndrome and a baby with Turner Syndrome were roughly one in five million. Why was I destined to be that one?

The nurse gave me the typical line: these new, non-invasive blood tests were just as accurate as an amnio. It was around 99% accurate. It was very unlikely that there would be a false positive. I felt guilty, but once again, I was devastated.

Then I started doing some research.

These new blood tests, so hyped by the laboratories offering them and the medical establishment, are sold as being a safe alternative to invasive testing, and just as accurate. But the reality is, they aren’t. They are most likely to be positive for Down syndrome, but that number goes steadily down for other disorders. Turner Syndrome? Less than 40%. So I underwent another amnio. The results came back negative. My baby, despite the fact that I was told that these tests were 99% accurate, does not have Turner Syndrome.

And instead of being relieved, I was angry.

How many women undergo these tests, being told that they’re accurate, and then summarily have an abortion based on the results? Mark Leach, another parent of a child with Down syndrome, has worked tirelessly to expose the problems with these tests. Despite being touted as the “holy grail” of prenatal testing, these screenings are just that: screenings. They are not diagnostic, yet that is how they are sold to women.

Non-invasive prenatal screenings (NIPS), such as MaterniT21, Harmony, Progenity, etc., continue to frequently give women inaccurate information. Because these tests are screenings and not diagnostic, women are supposed to be referred to further genetic counseling if they receive a positive result — but that doesn’t happen nearly enough. To this day, the tests are not regulated by the FDA, and a sting operation found that some of the labs were reporting that blood tests from women who weren’t pregnant at all were having baby girls without Down syndrome.

NIPS have been blasted for their lack of accuracy and transparency by the International Society for Prenatal Diagnosis, the the American College of OB/GYNs, and the New England Journal of Medicine. The laboratories are frequently criticized for advertising their tests are giving a reliable positive or negative result, for not being transparent, for their alarming lack of quality control, and for the unacceptable lack of regulatory oversight.

Yet these tests continue to be routinely recommended to women, and are sold as just as good as an actual diagnostic test: an amniocentesis. And far too often, women are pressured to have an abortion based on the results of these tests, especially if the test comes back as “positive” for a disorder that is often fatal, such as Trisomy 13 or 18. How many of these women killed their babies based on inaccurate information? The story of Sophie Horan, who aborted her baby with Down syndrome, is one such example.

There is no way of knowing whether or not her baby truly had Down syndrome, but by her own admission, this was a wanted child. If the test was wrong, then a baby was killed that need not have been. It does not excuse the murder of preborn children who do have Down syndrome or other disabilities, but the unavoidable fact is that some of these children, at least, could be saved.

I am not against prenatal testing. I am actually a big advocate for it, because knowing in advance was indescribably valuable to me. Not only did it allow me to come to terms with my son’s diagnosis before he was born, it meant that doctors could monitor him for the various health problems he was at high risk for. So often, the medical benefits of prenatal testing are left out of the equation. Babies with Down syndrome, for example, are at very high risk of miscarriage and stillbirth, because the placenta is significantly more likely to fail early. Knowing during pregnancy means that doctors can know to monitor the baby for just this potential problem, which could mean the difference between having a live baby and delivering a stillborn one. And that’s just one example.

So I really do understand the benefit of prenatal testing. But the testing needs to be done accurately and ethically, with the purpose of giving women information and allowing their doctors to plan for any various health risks the baby might face. The problem is that these new prenatal blood tests, so highly touted, are neither accurate or ethical, and that is something that needs to change.