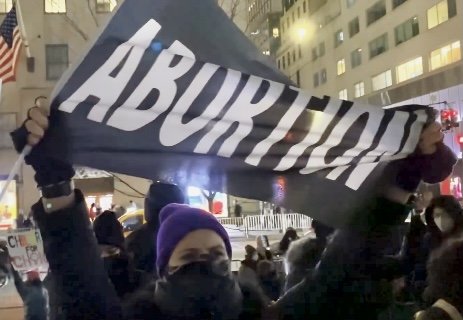 NEW YORK (LifeSiteNews) – Something strikingly distinctive about die-hard pro-aborts is the level of nastiness and hatred they often spew at pro-lifers. Just last week, a band of pro-abortion protesters outside of St. Patrick Cathedral had some choice words for the pro-lifers leaving Mass. One screamed, “Go to the h***b****”; Several yelled “F*** you,” and the pro-aborts chanted “New York hates you” to a group that included children and the elderly.

Of course, this is nothing new, and this kind of vitriol for pro-lifers is all too familiar to those acquainted with pro-life work. This past year alone saw a renewed streak of frenzied rage against pro-life speech on college campuses, for example. This “epidemic of vandalization” was well-documented by at least 2018. It is commonly accompanied by verbal and physical violence, such as spitting on, sexually harassing, or calling pro-lifers a “piece of s*** and worse,” or torching their cars.

But what was remarkable about last week’s protest outside St. Patrick’s was one woman in particular, who with one recorded exchange eloquently captured the mindset of those whose souls have been eaten from the inside by their stubborn defense of abortion. She wore a shirt under a red coat that looked like it read,“F*** the world.”

In one video recording, one can hear a man say to her, “I agree with you,” to which she replied, “Go away, go away,” while banging a drumstick on the barricade. Then she can be heard saying what sounds like “Go f*** yourself.”

Apparently stunned at her response, the man says, “You’re not listening to me.” To which she replied, “I don’t want to listen. I’m angry.”

Not only did she have no interest in engaging even with a man who openly agreed with her/i> (whether on her whole stance or one particular point is unclear), but she treated him as a pest and even an enemy, cursing at him. Her only interest during that time was to spew her anger indiscriminately onto bystanders.

This woman’s words fit hand in glove with what appeared to be written on her shirt. They show an all-consuming anger, one that blocks the ability to listen, to see, to connect, to receive good will, and to love, to the point that she willingly alienates someone who is on “her side.”

And she so perfectly shows that, as is so often the case with pro-aborts, their anger — no matter what exactly gave rise to it — goes hand in hand with an inability or a refusal to clear-headed reason about abortion.

But where precisely the anger comes from, and what it has to do with their fierce defense of abortion, is worth unpacking, with the understanding that the way these factors feed into the anger of pro-aborts varies from person to person.

It has become clear to me that a key feature of pro-abort anger, for some of the women at least, is that despite the real options available to them, they have a keen sense that circumstances have rendered them “trapped.”

The responsibility for their decision to have sex aside (with whatever pressures, insecurities, substance abuse, feelings, lust, etc., led to it), many pro-abortion women feel they face a hostile world unwilling to support them or their baby in their time of need. Sadly, they have reason for feeling this way at times, when they find not a single voice of encouragement to keep their baby. (All the more reason to spread the word about local pregnancy services.)

There are also, of course, the young women terrified to tell their family for fear of irate parents, fear of being kicked out or perhaps even disowned. Too frequently, women are coerced, including by their partner, into an abortion, and this is such a phenomenon that the Indiana House recently passed a bill that would make it a felony to coerce a woman into an abortion.

Some women have testified that they had an abortion because they felt physically or mentally or emotionally incapable of raising a child. The adoption option is discarded, considered too difficult. And then there are women who simply feel that raising a child would interfere with their desired lifestyle. Of course, no reason could come close to justifying the deliberate killing of an innocent child.

But for at least some angry post-abortive women, it is helpful at least to recognize that they felt trapped, as if there is no other option they can endure. All a woman may see is a hostile or unsupportive or indifferent world, and so she feels alone.

So despite pro-aborts’ chosen refrain that they are all about “choice,” many see pro-lifers as part of this hostile world and think, “How dare you condemn me for something I had ‘no choice’ about?” — whether or not they will admit this, or articulate it this way. Those at all familiar with pro-lifers know how wildly inaccurate this viewpoint is, as pro-life activists are some of the most compassionate people out there, and many of the women are post-abortive themselves.

Nothing to live or die for

Someone recently reminded me of another common feature of parents who choose abortion, which is a lack of real supernatural faith. For a mother, this truly, even deeply exacerbates a feeling of being alone and helpless, if she doesn’t believe in God as a Father who will provide for them and their child; It deprives suffering of meaning and makes suffering seem intolerable; It can deprive life of a sense of meaning entirely; It can deprive one of the ability to see raising children as a deeply meaningful endeavor, or, strangely, even the ability to see those children as the inherently delightful beings that they are.

Also inherent in this anger, if a man or woman hasn’t entirely deadened their conscience, is a buried guilt and consideration that there was indeed something wrong about the abortion. In the natural and supernatural law and order of things, killing one’s own child must weigh heavy upon the soul, until one has repented of it. Aside from being forced into an abortion, there will be a measure of moral responsibility that one cannot escape.

But if that man or woman refuses to consider the possibility of moral wrongdoing, that weight of conscience will manifest in ways which they themselves may not understand, including as anger, that the pro-abort interprets as a just anger toward those who would force them into the “untenable” position of having their baby.

The blindness of anger

For a woman, what allows this anger to fester in such a way that she directs it at pro-lifers, and not at herself, is that all the woman can see are her own trials. So, she is angry for having to endure or being asked to endure trials or suffering — even if they are relatively small. I’ve observed that often those who have the most to suffer, are the most silent about their trials, while those more vocally upset tend to have much less to endure in comparison.

As pro-lifers try again and again to show, such a woman is blind to the fact that she is irrevocably depriving a human being, whose most minute physical details and temperament are already blueprinted via DNA, of life and its meaning and joy — and thereby depriving herself, the father, the child’s own family, and the world of the blessing that is that child. If she would open her eyes to this, the prospect of that beautiful child, despite her circumstances, would be a ray of joy to temper whatever suffering or injustice she may encounter.

Although not all pro-aborts can be lumped into this group, there is an inescapable conclusion about the most vicious, militant pro-aborts — those who scream hateful obscenities at pro-lifers, who attack and harass them in various ways.

It is that their seething, unmitigated hatred for those who would dare infringe upon their exercise of unrestrained passion with no strings attached, by standing up for the rights of unborn children, is the outpouring of a soul who has fully, deliberately turned their backs on their own children, and on God. Thus, they will not only shamelessly murder their children, but commit full-fledged blasphemy: The “God loves abortion” slogan that was displayed on St. Patrick’s last week indicates that pro-aborts have reached new depths.

Their vitriol is a festering symptom of a soul who is already spiritually dead, and will be condemned to eternal death if they do not repent. And as the woman in red demonstrated, it is not a far leap from blind anger to hatred for everyone and everything.

Decidedly in this group are those who think it’s amusing to taunt pro-lifers by, for example, mocking the killing and burial of unborn children. They have made the chilling decision to flout the most fundamental laws of love and goodness, to the point of relishing the murder of innocents.

If they portray the unborn child as a dehumanized fetus or clump of cells, they have chosen to do so with indifference to the possibility that the unborn child is morally equivalent to another human being — just as any genocidal person or group of history who dehumanized their target before killing them chose to do so.

The anger and hate exhibited by certain pro-aborts should be all the more encouragement for us to meet them, and all those who support abortion, with kindness, patience, love and mercy. We must know that there are some who cannot be engaged, but must simply be prayed for.

Satanist-turned-Catholic Zachary King, who participated in many abortions, has recalled that on the few days the intended abortions weren’t carried out for whatever reason, the commonality was that people were praying outside of the abortion facility. Prayer is incredibly powerful.

Finally, it should be remembered that fruitful and peaceful dialogue with pro-aborts may not be common, but it is possible. Commenters have remarked how this debate between pro-lifers and pro-aborts was surprisingly respectful, and was more so than other debates hosted by the “Middle Ground.”

Yet, being able to see with one’s own eyes what an unborn child looks like — or an abortion procedure looks like — is even more effective. Live Action shared how an animated video portraying a second trimester D&E abortion consistently changed the minds of people who formerly considered themselves “pro-choice.”

There is hope for a change of heart for every post-abortive man or woman, even those who still fiercely defend abortion. May we never fail to love them, pray for them, and show Christ to them.