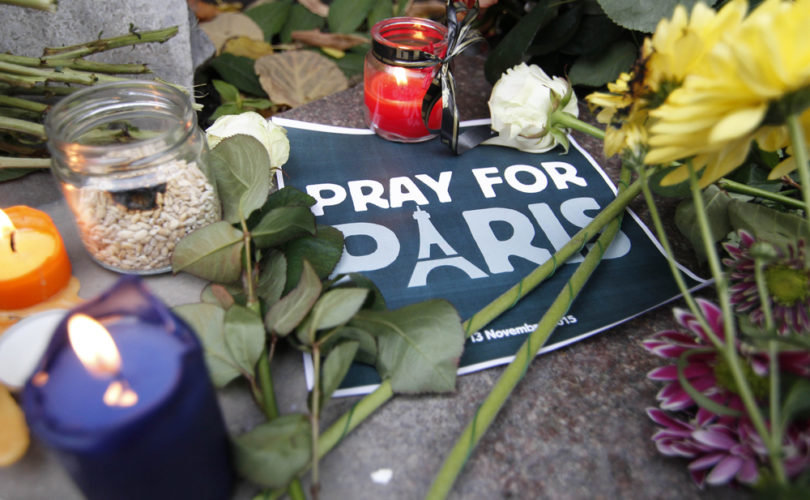 November 17, 2015 (BreakPoint) — Friday’s attack in Paris, when ISIS terrorists attacked a concert hall, a soccer stadium, and a neighborhood known for its cafes, killing at least 129 people and wounding another 350, was the second wave of terror launched against the City of Light just this year. Back in January, terrorists attacked the offices of the magazine Charlie Hebdo and a Jewish supermarket, killing a dozen people.

According to French president Francois Hollande, ISIS has “declared war” on France and that France’s response will be “pitiless.”

And the most common reaction here in the States, besides pity for the victims, is fear… that what happened there could happen here, wherever “here” might be for you. So let’s start by making one thing clear: for the Christian, the fear of God casts out all other fear. Yes, it’s reasonable to be concerned about personal and public safety, but we’re commanded throughout scripture to not be afraid. That’s because in the death and resurrection of Jesus, God has definitively dealt with evil.

Now it may not look that way after Friday. But as the author of Hebrews wrote, “At present, we do not yet see everything in subjection to him,” that is, Jesus Christ. Christianity acknowledges the fact of evil and suffering. A Christian worldview isn’t about sticking our heads in the sand and seeing the world in a Pollyannaish sort of way.

But other worldviews aren’t able to call evil, “evil.” In an article in Israel’s Haaretz newspaper, residents of the neighborhood that was attacked on Friday described the perpetrators as “victims.” One person said that the terrorists were “victims of a system that excluded them from society . . . who live here in alienation, and we are all to blame for this alienation.”

Another added that “These are people the government gave up on, and you have to ask why.” As Haaretz put it, “No one wanted to talk about Islamists or the Islamic State, even after it took responsibility for the attacks and French President Francois Hollande announced that the group was behind them.”

Secular liberalism simply can’t wrap its mind around the kind of unadulterated evil that ISIS represents, in large part because it can’t understand what motivates ISIS and its supporters.

That motivation, as the March 2015 issue of The Atlantic told readers, is a sincere, carefully considered commitment to returning civilization to a seventh-century legal environment, and ultimately bringing about the apocalypse.

Actually, a better word than “apocalypse” would be “eschaton,” the end of the present age and the ushering in of what they consider to be the reign of Allah.

Since it no longer believes in the Christian eschaton, the West cannot even begin to understand an Islamic one. So it treats ISIS like it does the rest of our broken world: something that we can master, provided we bring the correct tools, politically correct language, public policy, and techniques to bear.

Never mind that this kind of utopian approach has a lousy track record even when dealing with much smaller evils than ISIS. Never mind that it’s absurd to “declare war” on an evil when many of your people can’t bring themselves to call it “evil.”

That’s sticking your head in the sand.

But there’s more to that verse from Hebrews. The author goes on to write, “But we see him who for a little while was made lower than the angels, namely Jesus, crowned with glory and honor because of the suffering of death, so that by the grace of God he might taste death for everyone.”

Christ has triumphed! And while events might tempt us to fear and even doubt, like the original recipients of the letter to the Hebrews, we are called to look past events and see what is ultimately true and real.

So as Christians our work is to continue to participate in God’s work to restore all things under the Lordship of Jesus Christ. And neither ISIS nor any event in Paris should change that.