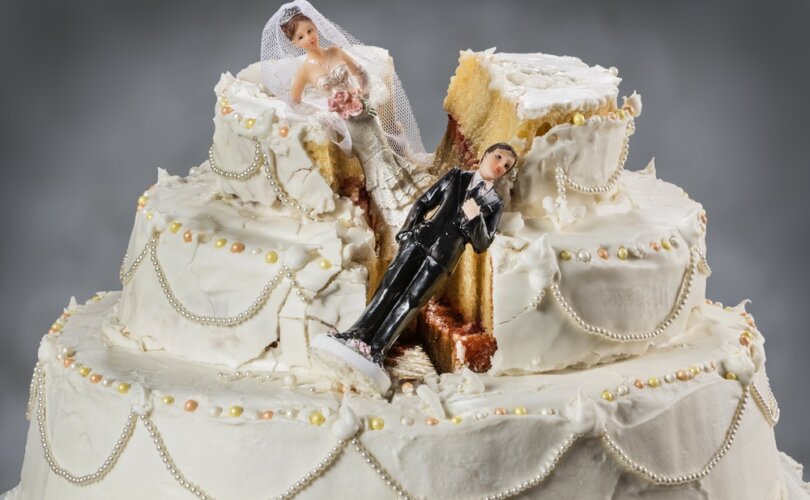 (LifeSiteNews) – Lefty political planners are great at coming up with appealing names for laws that accomplish the exact opposite of what those names promise. Recall the Affordable Care Act (otherwise known as “Obamacare”). That law wound up costing most people more for healthcare than before the misnamed legislation.

Now we are presented with something called the Respect for Marriage Act. And a less accurate legislative title can hardly be imagined.

This bit of political sleight-of-hand doesn’t respect marriage at all — at least not marriage as it’s always been understood. What we have here instead is a brazen attempt to force people of faith into accepting relationships that are contrary to God’s law, and consequently have been considered evil by virtually every traditional religion from the beginning of civilization.

The Respect for Marriage Act is a predictable extension of Obergefell vs. Hodges, the notorious 2015 Supreme Court case that declared same-sex couples have a “right” to “marry” under the Equal Protection Clause of the U.S. Constitution’s Fourteenth Amendment.

As described by the gay journal The Advocate, this legislation would “codify federal marriage equality [sic] by guaranteeing the federal rights, benefits, and obligations of marriages in the federal code; repeal the discriminatory Defense of Marriage Act [which restricted marriage to one man and one women]; and affirm that public acts, records, and proceedings should be recognized by all states.”

The implications of this are far-reaching, and not just limited to public agencies or programs. What governments must recognize, companies and private citizens are compelled to recognize as well. This means, for instance, that if you have an apartment to rent, you can’t refuse to rent it to a same-sex couple, whatever your moral convictions.

There are churches (and individual believers) that take comfort in certain “protections” the Respect for Marriage Act allegedly affords, for instance that clergy wouldn’t be forced into conducting same-sex “weddings.” This hope has been embraced enthusiastically by those “politically correct” denominations that represent themselves as “welcoming and inclusive communities.”

And The Advocate reports that a group of senators has proposed an amendment stipulating that “no nonprofit religious organization would have to provide goods, services, or facilities for wedding ceremonies or receptions, and it clarifies that the federal government would not have to recognize polygamous marriages.”

But then, it was promised that, under Obamacare, “if you like your current insurance plan, you can keep it.” Ask the many people who found their company-paid policies cancelled how well that pledge worked out.

In reality, the Respect for Marriage Act contains a very real and imminent threat of civil suits and even criminal prosecution for resisting recognition or accommodation of same-sex couples. Consider the poor Christian baker in Colorado who’s still being persecuted over his refusal to provide a custom-decorated cake for a same-sex “wedding” — even after his religious rights were affirmed by the Supreme Court.

How long would it be before pastors faced lawsuits and even arrest for citing biblical injunctions against homosexuality and other aberrant sexual practices? It’s already happening in Canada.

Our bishops recognize the danger. In a recent statement, Cardinal Timothy M. Dolan of New York, chairman of the U.S. Conference of Catholic Bishops’ Committee for Religious Liberty, warned that “in any context in which conflicts between religious beliefs and same-sex civil marriage arise, the Act will be used as evidence that religious believers must surrender to the state’s interest in recognizing same-sex civil marriages. Wedding cake bakers, faith-based adoption and foster care providers, religious employers seeking to maintain their faith identity, faith-based housing agencies — are all at greater risk of discrimination under this legislation.”

I’ve spoken with my congressional representative, and he assures me that such civil-liberty risks can be avoided by “fixing” the Respect for Marriage Act before it’s enacted into law.

Good luck with that, Congressman.

Once more, our experience with Obamacare is relevant. The Little Sisters of the Poor prevailed in court over their refusal to include coverage of abortion and birth control in the insurance plan for their lay employees. Yet they continue to endure legal harassment.

We Catholics recently marked the end of our liturgical year by celebrating the Solemnity of Christ the King. Well, it’s nice that such a feast is still on our liturgical calendar, but the sad reality is that the kingship of Christ, and respect for his Law, are acknowledged by fewer and fewer people.

This legislation is nothing more than a tool for religious persecution. Get ready, because persecution is coming.

This essay is based on a homily delivered by Father Orsi. It can be viewed online here.