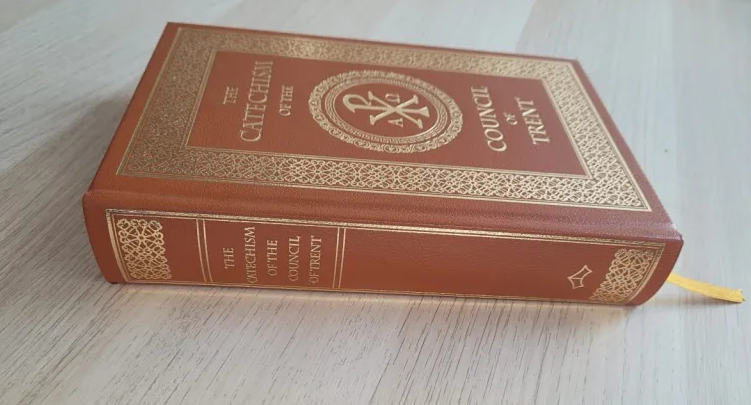 (LifeSiteNews) — “The Roman Catechism” – the Catechism of the Council of Trent – is a text like no other.

The theologians John A. McHugh and Charles J. Callan wrote that “it enjoys a unique authority” among catechisms.

But why should we be so interested in a catechism written nearly 500 years ago?

In this part, we’ll see why it is still appropriate reading for twenty-first century Catholics – and the vital role that it could play in navigating our turbulent times.

The nature and structure of the Roman Catechism

Like many catechisms, the Roman Catechism divides its topics into four main heads: the Creed, the Commandments, the Sacraments and Prayer.

The translators – two Dominican theologians McHugh and Callan – say that “while dealing with the profoundest mysteries,” the Roman Catechism’s treatment of the Creed and the Sacraments are nonetheless “full of thoughts and reflections most fervent and inspiring.”1

The section on the Commandments “teaches us in words burning with zeal”; and the final part, on Prayer and the Our Father, “is doubtless the most sublime and heavenly exposition of the doctrine of prayer ever written.”2

The two translators call this Catechism a “vade mecum” for all priests and ecclesiastical students.3

For priests, “it is not only a review of his former studies, but an ever-present and reliable guide in his work as pastor, preacher, counselor, and spiritual director of souls.”4

For students, it is “a recapitulation of all the more important and necessary doctrines he has learned throughout his theological course.”5

They even consider it to be very appropriate for “the educated layman, whether Catholic or non-Catholic, who desires to study an authoritative statement of Catholic doctrine.” For such a person, they write:

No better book could be recommended than this official manual; for in its pages will be found the whole substance of Catholic doctrine and practice, arranged in order, expounded with perspicuity, and sustained by argument at once convincing and persuasive.6

But is it a dry book? It is true that some translations can be difficult to read. The McHugh and Callan translation is easily available from several publishers today – and it draws away obscurity, allowing us to see its meaning clearly.

The two Dominicans defend the Roman Catechism from all charges of dryness or coldness:

There is no single-volume work which so combines solidity of doctrine and practical usefulness with unction of treatment as does this truly marvelous Catechism. From beginning to end, it not only reflects the light of faith, but it also radiates, to an unwonted degree, the warmth of devotion and piety.7

But even if it is a wonderful text to read and study, what are we to say of its importance for our time? Why would we adopt this text as a keystone resource, rather than something like the Baltimore Catechism?

Doubtless another question arises: why do we need a catechism that is several centuries old, when we have a contemporary one that has been published by John Paul II?

The importance of the Roman Catechism for our day

John Paul II called The Catechism of the Catholic Church “a valid and legitimate instrument for ecclesial communion and a sure norm for teaching the faith.”8

But we may start by asking: to which version of the new catechism should we turn to seek this unity of faith and communion? The version initially released in 1992 – or the revised version promulgated in 1997?9 Or should we turn to the 2018 version, with its “minor” revision on the death penalty?

But in fact, the 2018 version tells us, it is now “inadmissible.” It certainly appears that the two versions of this same text stands in condemnation of the other.

It will not do to claim that this matter was not definitively taught prior to 2018, nor that it is a matter which does not affect the lives of the faithful. It very much affects those found guilty of capital crimes, victims of crime, their families, judges, politicians and legislators.

In brief, it is far from clear that any of these versions of the “Catechism of the Catholic Church” can form “a sure norm for teaching the faith,” or that they have successfully brought about the unity of “ecclesial communion.”

Before we can make any sense of what’s going on, we first have to know what we must believe – what the teaching of the Church actually is. But the essence of the current crisis – however it is to be explained – is that we are frequently unable to attain clarity here. In this sort of confusion, it seems legitimate to ask where else we might be able to turn – both about this matter, and about the whole of the Faith.

Against all this confusion, the Roman Catechism teaches us with clarity. It calls the death penalty “lawful,” explains the matter in enough detail, and even states that the just use of this measure “is an act of paramount obedience to [the fifth] commandment which prohibits murder.”12

We all know the extent of doctrinal chaos which we are facing today. For whatever reason, the modern Catechism has not held back this flood.

For many, the Roman Catechism is the solution they and their families need in this crisis.

The Roman Catechism and the crisis in the Church

Our unprecedented crisis requires us to turn to the sure norms of the faith – the many authorized texts from before this period of confusion.

In the midst of confusion, the first thing that Catholics must do – before trying to construct theories to explain the situation – is to adhere firmly to the Catholic Faith.

The Church Father St Vincent of Lerins famously tells us that we believe what has been believed “everywhere, always and by all” – and then considers what we should do in cases of confusion:

What, if some novel contagion seek13 to infect not merely an insignificant portion of the Church, but the whole?

Then it will be [our] care to cleave to antiquity, which at this day cannot possibly be seduced by any fraud of novelty.14

In other words, we can leave those who seek to explain or nuance this matter one way or another, and turn instead to the monuments of tradition. But there is no need to conduct a detailed survey of the Fathers, the decrees of the ancient councils or even works of theology: we are able to turn to texts like the wonderful, celebrated Roman Catechism.

If we know our catechism inside-out, then we will stand firm whenever we hear anyone contradicting or obscuring its teaching.

With the Roman Catechism, we have the assurance that it teaches the faith which we are bound to believe. Some of the most prominent churchmen in this period have specifically called for us to return to the Roman Catechism itself, and to read and re-read it as a family.

Where one goes from there, and which theories and solutions might explain the crisis, are interesting questions. But it is clear that the traditional doctrine of the faith, as found in texts like the Roman Catechism, should form the universal starting point of any response to the current crisis in the Church.

We know that the Church’s approved sources present the true, safe and obligatory doctrine that is imposed on our consciences. Today, we must allow the light of these texts to illuminate both our faith and our assessment of the crisis itself.

In this sense, the Roman Catechism is one of the most important texts available in this terrible Passion of the Church.

In this piece I have made some strong claims on the strength, power authority and importance of the Roman Catechism for our day. But are these just exaggerations – or can these claims be substantiated?

In the next parts I will explain how the Church came to be blessed with “that golden book” (as Pope Leo XIII called it) and the surprising position it holds in the life of the Catholic Church.

1The Catechism of the Council of Trent (hereafter “RC”), trans. John A. McHugh and Charles J. Callan, Baronius Press, 2018. Introduction by McHugh and Callan, xxxviii

11This is proved in Chapter 3 of Feser and Besette’s By Man Shall His Blood be Shed, Ignatius Press, San Francisco CA, 2017.

13Note that he says “seek”. It is not possible for the error to actually overcome the whole.