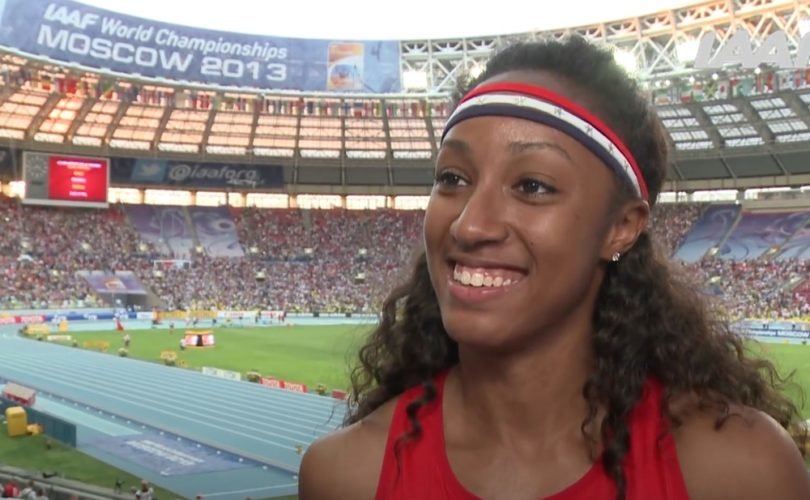 July 8, 2021 (LifeSiteNews) – Brianna Rollins-McNeal terminated the life of her unborn child to keep her Olympic dream alive. Now, both her aspirations and her child are dead.

The facts of this doubly tragic situation are muddy enough that only the 2016 100-meter hurdling champ knows exactly why she didn’t answer the door or the phone to submit to a required drug test in January 2020, or why she thought changing the dates on documents from the abortion business was a good idea. But the outcome is indisputable: No baby, no Olympics.

Then COVID-19 locked down the world and the 2020 Olympics were postponed until this year. Although she had already been banned from competing, she was allowed to take part in qualification trials this year while she appealed, and she qualified again. But the Court of Arbitration for Sport last week dismissed her appeal, upholding the five-year ban for “tampering within the results management process.” Brianna told the New York Times that changing the date on the forms was “an honest mistake during a very emotional time.”

If she had not had the abortion, it’s possible she could have had her baby and still competed in the Olympics, if not this year, then perhaps in four years. Now she will sit out not only the 2021 Olympics but the 2024 games as well. Now 29 years old, the 2028 Olympics might be beyond her reach. I sincerely hope not, for her sake.

The rules for drug testing elite athletes are bizarre and intrusive, and yet seem to be necessary to keep doping out of sports. Some people, including Brianna, are trying to give her case a racial tinge, but athletes of all colors have been disqualified from competition. Cyclist Lance Armstrong was stripped of all his Tour de France titles when he was revealed to have been doping for years. Even this year’s Kentucky Derby winner, Medina Spirit, had his win nullified when he tested positive for an illegal substance. The lengths that some athletes will go to get away with doping sometimes defy belief, like this tale of the Russian team at the 2014 Olympics.

But Brianna has never tested positive for any banned substance, and missing the January 2020 test would not have disqualified her from the Olympics. We don’t know how far along she was when she had her abortion, but she either would have been very pregnant in July 2020, or newly postpartum. She couldn’t have competed in either case, so she made the choice that now she realizes was the wrong choice.

I’m not an elite athlete, of course, but I am a woman who gave up two of my children to abortion, and I know that as much as it must hurt Brianna to lose those potential medals, losing a child has no parallel.

My colleague Dr. Theresa Burke, co-founder of Rachel’s Vineyard, a ministry of healing after abortion, said not all women experience abortion as a simple medical procedure. For many it is indeed traumatic as it is an intimate violation of body and spirit.

Dr. Burke said it’s not surprising that Brianna would panic and want to ensure consistency in her story and in her accounting for her actions during the time of the abortion and the missed drug test. She was dealing with the tragic loss of her precious child, sacrificed for an Olympic event that ended up canceled because of the pandemic.

“Sadly, she was pitted between the life of her baby or the prospect of terminating her athletic career – a goal she had trained and worked toward her entire life – only to see her opportunity discarded, like the dream of her little baby lost in an abortion,” Dr. Burke said.

Brianna would benefit from an abortion recovery program where she could gather with others who understand her pain, and find emotional and spiritual healing of her traumatic experience.  If World Athletics had some understanding of the reality of the aftermath of abortion, perhaps they would focus less on punishment, and instead encourage Brianna to find healing resources for her irreplaceable loss.

This month’s Olympics and those in 2024 will likely be a very painful and emotional time for Brianna and I can’t help thinking of something a young woman from Mississippi told a gathering of the Silent No More Awareness Campaign at the 2012 March for Life. Talking about the abortion she had had in 1999, she said “I love being here with all of you, but I would rather be home with my 13-year-old. I regret my abortion.”

Evangelist Alveda King is a pastoral associate of Priests for Life and leads its outreach Civil Rights for the Unborn. A niece of Rev. Martin Luther King Jr., she has authored many books, including King Rules and How Can the Dream Survive if We Murder the Children. Connect with her on Facebook HERE.