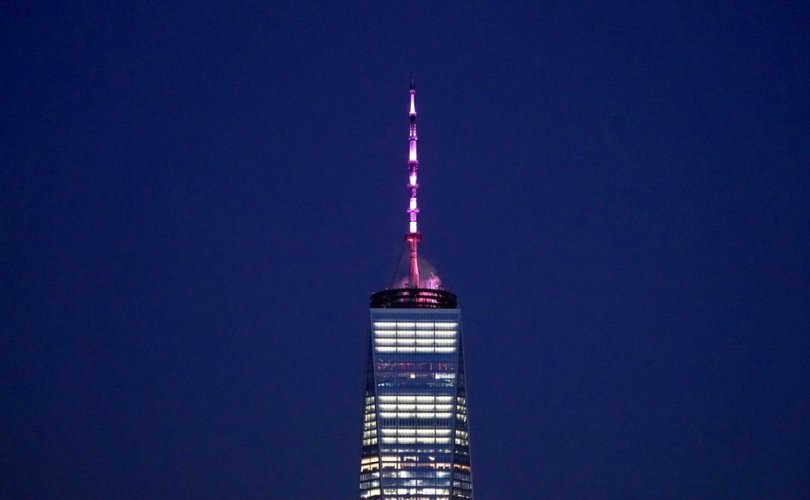 January 28, 2019 (Human Life International) – I can't imagine a more horrible irony. On Tuesday, January 22, New York Governor Andrew Cuomo ordered that the spire of the One World Trade Center be lit pink. The reason why? To celebrate the passage of a new law that radically liberalizes abortion in New York State – in some cases allowing abortion up until the moment of birth, permitting non-doctors to perform abortions, and removing recognition of preborn babies older than 24 weeks as potential homicide victims.

The new One World Trade Center is built on the same ground where thousands of innocent Americans – including eleven unborn babies – lost their lives on 9/11. The new building is supposed to stand as a symbol of America's resilience in the face of evil, a memorial to those who lost their lives. Yards away from the building, the 9/11 memorial explicitly honors the “unborn child” of each of those eleven pregnant women who died on that infamous day.

And yet, Gov. Cuomo – who considers himself a Catholic – had the gall to use this self-same building to “celebrate” a profoundly divisive and extreme law that will ensure that far more innocents will lose their lives in the coming years in New York. Bizarrely, this is the same man who announced last fall that – “in solidarity with Pope Francis” – he was going to end the death penalty in New York. Get that? He's with Pope Francis on not giving lethal injections to convicted murderers – but innocent unborn babies? That's a different story.

Cuomo hailed the new law – passed on the anniversary of the Roe v. Wade decision – as “a historic victory for New Yorkers and for our progressive values.” He also ordered the Governor Mario M. Cuomo Bridge, the Kosciuszko Bridge, and the Alfred E. Smith Building in Albany to be lit pink in order – as he said – to “celebrate this achievement and shine a bright light forward for the rest of the nation to follow.”

God's mercy is infinite. Even the most extreme and hardened of sinners must be given the opportunity to repent – and yet I can well understand why some Catholic leaders are raising their voices asking when New York Cardinal Timothy Dolan will formally and publicly excommunicate Gov. Cuomo.

By all means, privately offer Gov. Cuomo every opportunity to recant. But if he is allowed to so publicly flout the absolute most basic of Catholic moral teachings by going so far as to co-opt some of New York's most visible land-marks to express his boundless enthusiasm for the legalized murder of innocents, without any consequences from Church leaders, what message does this send?

The new law – the so-called Reproductive Health Act – replaces the 1970 law that made New York the first state in the nation to legalize abortion. Although the 1970 law was more restrictive than the new law, it was more than enough to allow abortion to flourish – if death can be said to “flourish”– in New York.

New York’s abortion rate is already double that of the national average. According to the New York State Department of Health, 285,127 induced abortions were committed in the state between 2012 and 2014. In that same period, there were about 712,497 live births. That means there were 400 abortions per 1000 live births in the state during that period.

And yet, at a time when the birth rate in the United States is plummeting, so that we're no longer even replacing our population, Gov. Cuomo and other pro-abortion politicians think we need to open the door to more abortions?

The previous abortion law had banned abortions after 24 weeks, except in cases where the mother's life was in danger. The new law significantly expands the exception to include cases where the mother's “health” is in danger, or the unborn child isn't deemed viable. But if there is anything that pro-lifers have learned over the last few decades, it's that any so-called “health” exception can be exploited to cover just about any excuse an abortionist can think up. The new law will almost certainly permit the indescribable barbarity of late-term abortions to take place with increasing frequency in New York – the painful scalding of babies to death with saline solutions, or the administration of lethal injections and the cruel dismemberment of sometimes-still-living babies.

And then, there's the bizarre decision to permit nurse practitioners and midwives to perform abortions in some cases. “We're saying here in New York, women's lives matter. We're saying here in New York, women's decisions matter,” pro-abortion Senate Majority Leader Andrea Stewart-Cousins said after the law passed. And yet, what does it say about pro-abortion concern for women that New York is opening the door to less-trained health-care workers to perform abortions on vulnerable women?

And if by any “accident” any such late-term babies should survive the abortion process – as happens far more often than the abortion industry would like us to know – the new law ensures that news of any such slip-up almost certainly won't see the light of day by revoking the requirement that a second physician be present during late-term abortions. As the New York State Right to Life Committee lamented, this provision effectively has the effect of “authorizing infanticide.”

And again, the law now ensures that if an unborn child over 24-weeks gestation – even if the baby is wanted! – is killed during a violent crime, that the perpetrator cannot be charged for the baby's murder.

And this is the “light” that Gov. Cuomo hopes will spread from New York across the country!

The Mystery of Evil

Moments after the new law passed the New York Senate, pro-abortion legislators and observers burst into raucous cheers. “Until a few minutes ago,” wrote pro-life Professor Robert George after watching the video, “I had never felt physically ill as a result of watching something on television. But the video footage of New York legislators applauding and cheering the monstrous late-term abortion bill they passed … on the anniversary of Roe v. Wade literally nauseated me.”

“What kind of people are we?” he asked. “How can so many be utterly blind to such gross and manifest evil? These people were cheering. They were cheering. Where did this fanatical commitment to ensuring that the lives of children in the womb count for nothing – indeed less than nothing – come from? How did this contempt for human life insinuate itself into people's hearts?”

I don't know the answer to that question. The mystery of evil is precisely that – a mystery. We must pray for every one of those pro-abortion legislators, that they will experience conversion of heart, and that God will forgive them the grave crime they perpetrated last week. And we must work and pray to overturn this despicable, unjust law.

“Words are insufficient to describe the profound sadness we feel at the contemplated passage of New York State's new proposed abortion policy,” wrote New York's Catholic bishops in a statement shortly before the law passed. “We mourn the unborn infants who will lose their lives, and the many mothers and fathers who will suffer remorse and heartbreak as a result.”

“Our Governor and legislative leaders hail this new abortion law as progress. This is not progress. Progress will be achieved when our laws and our culture once again value and respect each unrepeatable gift of human life, from the first moment of creation to natural death. Would that not make us truly the most enlightened and progressive state in the nation?”