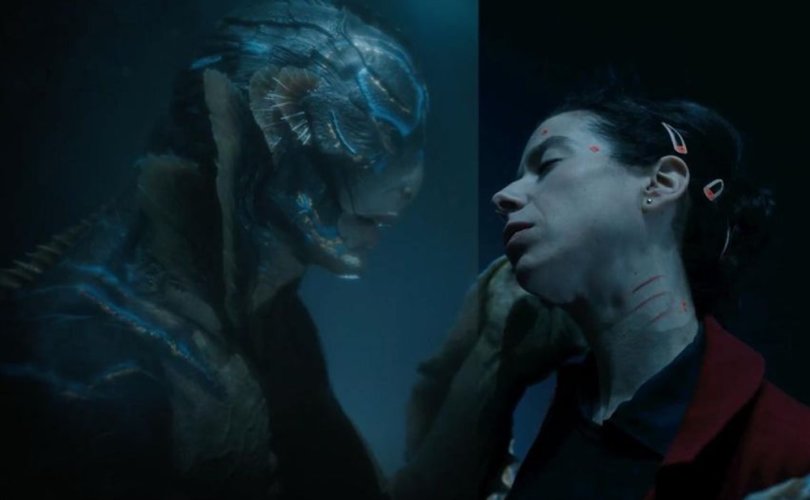 Still from The Shape of Water.

June 14, 2018 (LifeSiteNews) – In his recent heavily lauded film The Shape of Water, Mexican horror director Guillermo Del Toro chronicles the Cold War era love affair between a mute custodial worker at an American research facility named Elisa Esposito and a strange aquatic creature that has been captured by the American government. Throughout the course of the film, Elisa befriends the creature and rescues it, taking it to her home where she tends to the strange being in her bathtub.

Over time, Elisa oddly falls in love with the fish-like being and even has carnal relations with it.

After a variety of twists and turns and bestial romance, Elisa and the fish man escape from the nasty American military establishment into the water in which Elisa herself changes into a fish (it is implied in the movie that she may have originally been a fish creature herself who was found in a river with cuts on her neck where gills would be).

The film itself is, on one level, quintessential left-wing propaganda. Released in the printemps of Social Justice Warrior (SJW) activism, there are all the elements that would tantalize unwashed pink haired SJW zombie hoards: revenge fantasies of killing a handsome, strong, and intelligent Western man, bizarre and unnatural sexual encounters, fetishizing of the notion of the gifted outsider or other attacks on the military, and an overall sappy panoply of “dad issues” and weird boyfriend fantasies.

However, more than these silly tidbits, The Shape of Water is an unsettling watershed in the trans-movement. As Brokeback Mountain and Lady Gaga’s “Born This Way” provided the right social conditioning at just the right time to rewire the minds of Americans regarding marriage, so too does The Shape of Water oddly forebode a new step in the LGBTQ+ movement: the legitimization of any and all forms of sexual encounter.

But this should not surprise us, for what John Paul II called the “culture of death” had already given us a warning that this would happen a long time ago.

All unnatural ideas begin in barely readable books, that is, the kind of books that only boring professors read, and the vision of a polymorphous, even trans-species sexuality celebrated in films like The Shape of Water was hatched in a 1955 work by Frankfurt School philosopher Herbert Marcuse titled, Eros and Civilization: A Philosophical Inquiry into Freud.

Marcuse’s work is largely an attempt to wrestle the thought of Austrian psychoanalyst Sigmund Freud away from mid-20th century, “post-Freudian,” conservatives and Christians who had appropriated Freudian terminology and ideas to advocate what Marcuse derides as “(i)dealistic morality.” Marcuse expresses his worry in the work that Freud’s insights are being used to help wounded individuals develop a normal love life within the confines of marriage, and the Cultural Marxist Marcuse wants to show the reader just how radical Freud’s ideas can be.

Acknowledging that even Freud himself may have been too tame in advocating some degree of sexual restraint, Marcuse lays out a fundamentally Freudian anthropology in which the self “exists, as it were, in two different dimensions, characterized by different mental processes and principles.” The self is torn between “the conscious,” which is “ruled by the pleasure principle” and conscious life, which is governed by the “reality principle” or cold hard facts that, “you can’t always get what you want.”

Thus, at the basis of Marcuse’s thought is that the self is stuck between wild, irrational desires for pleasure at any cost and the limits placed on it, which, allegedly, can produce neurosis or mental illness in a person if he or she is not able to act on his or desires.

Marcuse’s goal in Eros and Civilization is to provide the philosophical justification for tearing away the restraints on sexual behavior in order to free Western men and women from the harsh demands of modern civilization.

Like all revolutionaries, Marcuse promises the savory carrot of freedom and happiness to his readers. He advocates a “non-repressive mode of existence” and “liberation of instinctual needs and satisfaction which have hitherto remained tabooed or repressed.’ Marcuse leaves his phrase here open-ended intentionally. While his initial readers in 1955 might think that Marcuse here is merely advocating for consensual heterosexual sex outside of the bonds of Christian marriage, the West traditionally has, even in its murky pagan past, forbade homosexuality, pederasty, necrophilia, incest, bestiality, and rape.

As a result, smashing the traditional Western restraints on and taboos forbidding sexual activity in the West will “free” any and all forms of sexual desire.

Marcuse drops hints throughout Eros and Civilization that this radical form of total sexual liberation is exactly his intent as he praises the recent “discovery of infantile sexuality” and further argues that sexuality is by nature “polymorphous-perverse,” that is there is no natural or correct form of sex.

Marcuse makes no bones about his desire to creative “qualitative social change” with his work, that is, he wants to change what Westerners think sexuality is through “the gradual abolition of repression.” This gradual abolition of repression will allow supposedly neurotic Western Christians to realize that their bodies are not made in the image and likeness of God with specific body parts that have specific functions; rather, there are “unlimited erotogenic zones of the body …”

One of the Marcuse’s repeated points is that the entire body needs to be sexualized and that sexual encounter should not be limited to the male and female sex organs. One can easily see here how Eros and Civilization became one of the foundational texts of the gay rights movement, which, piggybacking on the legalization of birth control in the 1965 Supreme Court Case Griswold vs. Connecticut, sought to sever reproduction from sex in the minds of the American people.

Marcuse argues that in some primordial state, the human body was full of sexualized “zones” for pleasure and he even makes a revolting pitch for what Pope Francis himself as recently called “coprophilia.” Quoting Freud, Marcuse argues that the “primary content of sexuality is the ‘function of obtaining pleasure from zones of the body…’” and a “reactivation” of these zones will spark a “resurgence of pregenital polymorphous sexuality and in a decline of genital supremacy.”

According to this twisted thinking, the goal of the sexual revolution is the freeing of any and all forms of sexual experience by allowing humans to be released from “constraint, external and internal, physical and moral,” which will be accomplished by reactivating “early stages of the ego” by dissolving “the institutions of society” through a “a subversion of culture … ”

This has always been the goal of the sexual revolution: radical and total freedom that can only be accomplished by destroying the Christian West by destroying its fundamentally Christian culture.

Water, of course, has no shape, just like love or “Eros” in the thinking of Frankfurt School philosophers like Herbert Marcuse and movie directors like Guillermo Del Toro. The Shape of Water is exactly the sort of cultural destruction that Herbert Marcuse ordered to be produced in order to attack the West and to encourage the pursuit of forbidden desires — even, in this case, the absurd and gross love of a fish.

We are in the midst of a ferocious cultural war against an enemy that will not stop until Christianity and the West are completely destroyed and every vice and degenerate act is normalized.

It is about time we fought back.

Editor's note: Jesse Russell, a native of Livingston, Montana, earned his Ph.D. from Louisiana State University. He has written for a variety of scholarly and popular journals. He currently teaches at the university level and, with his wife, is a homeschooling father of four.