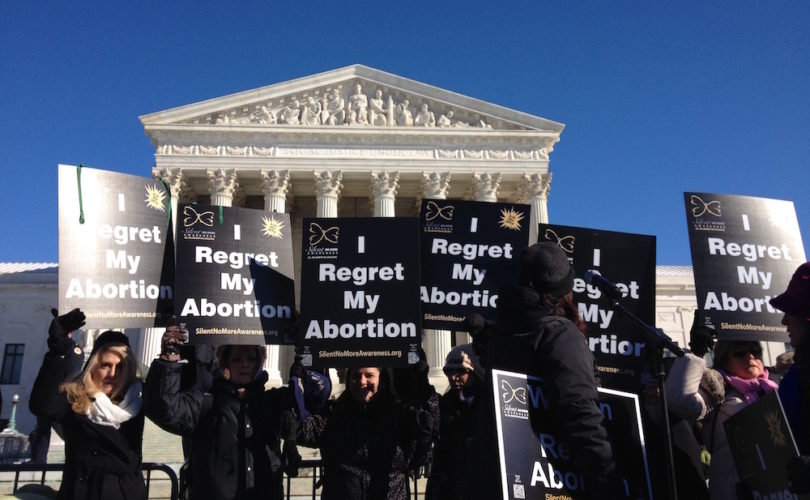 January 5, 2017 (LifeSiteNews) — As we prepare to come together again this month in Washington D.C., something continues to resonate within me about the last two gatherings of the Silent No More Awareness Campaign at the March for Life.

That afternoon and evening of January 22, 2016, as we stood at the steps of the Supreme Court and snow began to blanket our nation's capital, I saw the campaign’s Shockwaves of Abortion Initiative in a new and dynamic light.

The Shockwaves of Abortion shines a bright light on the wider impact of abortion on our families, communities, and nation.  We know that the mother and the father of the child (and abortion providers and staff) are at the “epicenter” of the abortion event.

But the destructive shockwaves reverberate across our nation impacting all of us.

Grandparents, family, and friends can play an integral role in the abortion decision and procedure.  They, along with the siblings of aborted children, are often intimately touched by that unborn child’s death.

In 2015, at the close of the March for Life, former abortion doctor Anthony Levatino offered a moving witness of his conversion from an agent of death to a defender of the unborn.  Mothers, fathers, grandparents, and siblings of aborted children also shared their testimonies and stood side by side with Dr. Levatino as they prayed for, and supported one another.

Many participants remarked on the additional healing and spiritual blessing of being able to share their abortion regret and pain in the presence of a former abortionist.  They recognized their common need to repent, grieve and sometimes the more challenging task, to forgive those who have hurt them so deeply.

The unique signs they carried – I Regret Performing Abortions, I Mourn My Aborted Sibling, etc — and their testimonies created a dynamic visual presentation and a living, breathing narrative of this wider reality of how the Shockwaves of Abortion have impacted our society.  It was also a beautiful witness to the power of God to bring faith, hope and new life – out of sin, suffering, and death.

“Abortion scatters- healing gathers. Abortion brings destruction and division; healing brings unity and the peace of Christ to wounded hearts and souls, and their broken relationships.”

Last year, dozens of women and men disregarded the winter weather warnings and the handful of noisy counter-protesters outside the Supreme Court to once again testify to the damage that abortion caused them, their families and the wider community. Silent No More co-founder Georgette Forney later found herself in an now-famous 30-hour traffic jam on the Pennsylvania Turnpike but, undaunted, she will return this year.

On January 21, the Silent No More Awareness Campaign will once again gather prior to the West Coast Walk for Life in San Francisco and San Diego, and on January 27 they will be at the steps of the Supreme Court in Washington, D.C. at the close of the March for Life.  The participants will hold their powerful signs saying “I Regret My Abortion,” witnessing to the world the truth about their loss and regret, and through their testimonies, the destructive power of the Shockwaves of Abortion.  Those who hear them will be blessed to witness the mercy and healing power of God.

I have been in pro-life advocacy and ministry for abortion loss for over 25 years.  Being part of the Shockwaves gathering in D.C. these past two years was one of the most powerful spiritual and emotional experiences in my many years of pro-life outreach.

I encourage you to join us at this year’s Silent No More Campaign gatherings. Here’s information on the West Coast and Washington D.C. events.  We look forward to seeing you!