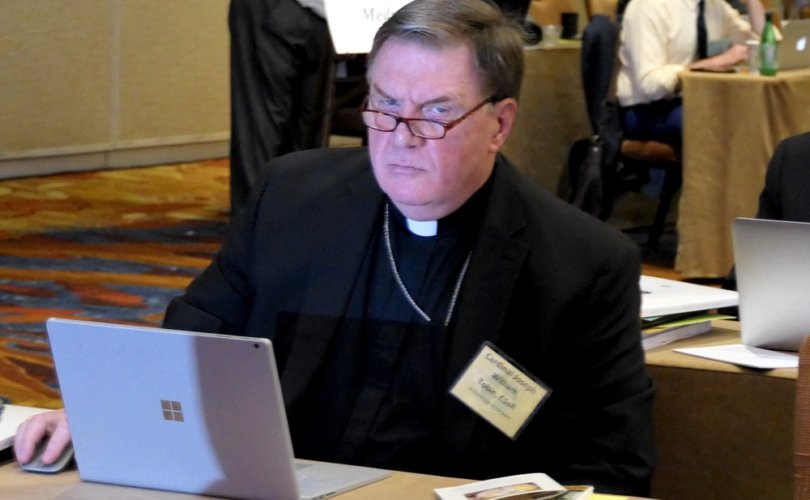 March 8, 2021 (LifeSiteNews) – Now that Cardinal Joseph Tobin has been appointed by Pope Francis to the Vatican's Congregation for Bishops, journalist Phil Lawler has reminded us all that this is the churchman who several years ago inadvertently made public via Twitter a message that was clearly intended to be private and destined for just one recipient. The Cardinal tweeted the words, “Nighty-night, baby. I love you.” And when the diffusion of this tweet on the internet provoked widespread concern and indignation among Catholics, His Eminence hastened to assure everyone that this affectionate and intimate message was innocently directed to his sister.

Now, the strategic importance of the Congregation for Bishops can hardly be overestimated. When Pope Clement VIII was elected in 1592, one of his first acts was to ask his learned and holy Jesuit friend Cardinal Robert Bellarmine – subsequently declared a Saint and Doctor of the Church – for advice about what his priorities should be as pope. Even though Bellarmine was known for his scholarly exposition of the magisterial authority and infallibility of the Successors of Peter, he did not mention this teaching office in his response to the new pope. Rather, he answered bluntly to the effect that in his view the most important duty of the Roman Pontiff is to appoint the right men as bishops. For unless the Church's health is nurtured at grass-roots level through the sound teaching, discipline, and pastoral care of good and wise bishops, even the most excellent doctrinal teaching coming from Peter's Successor will have only a limited effect.

The nomination of Cardinal Tobin as one of the pope’s key advisErs in this fundamentally important task thus brings back to the “front burner” the notorious tweet mentioned above. For at a time when the McCarrick case has been a catalyst for raising many questions about seeming cover-ups of moral decadence in the higher echelons of ecclesiastical power, including the Vatican, there is a renewed demand throughout the Church for transparency in action, not just verbal assurances thereof. None of Cardinal Tobin's brothers in the U.S. episcopate has called him out – at least, not publicly – over this tweet and its seeming implications. So it appears that in general they are prepared to give him the benefit of the doubt and accept his benign explanation of the eyebrow-raising tweet.

Now, while this may appear to be the most charitable course of action – assuming a fellow bishop's innocence and professed purity unless and until the contrary is proven – it is also true that we have seen far too many examples in recent decades of Church leaders turning a blind eye to grave abuses that need serious investigation, while appealing to charity and justice as an excuse for their inaction. Keeping in mind that context, as well as the high importance of Cardinal Tobin's new position, we should perhaps examine a little more closely his explanation of the Twitter message in question.

There is a simple question that arises here that I have never seen raised in any discussion of “Nighty-night, baby.” If His Eminence was telling the truth in saying these words were directed to his sister, why didn't we ever hear from her?

Suppose you were a lady who knew that your highly placed brother – whom you are very fond of and use intimate terms of endearment when keeping in touch – was falsely under attack in the media, smeared by accusations of an impure and sinful relationship that were gravely damaging both to his personal reputation and to the good name of the Church he serves. Wouldn't you spontaneously want to clear his reputation by publicly speaking out to confirm that what he said was true – that your eminent brother had in fact called you that night, and that, yes, he often affectionately calls you “baby” in private? Indeed, wouldn't your silence under those circumstances make you almost an accomplice in this calumny against your beloved brother's virtue, and in the harm it was doing to the Church?

It seems to me, therefore, that the silence of the sister in this situation is very eloquent: it suggests strongly that she knew her brother's explanation of the tweet was not true. We may reasonably hypothesize that she didn't want to throw her brother under the bus by publicly calling him a liar. But neither was she going to tell a lie herself by confirming his story in order to cover up his highly questionable relationship with someone else. So she just kept quiet.