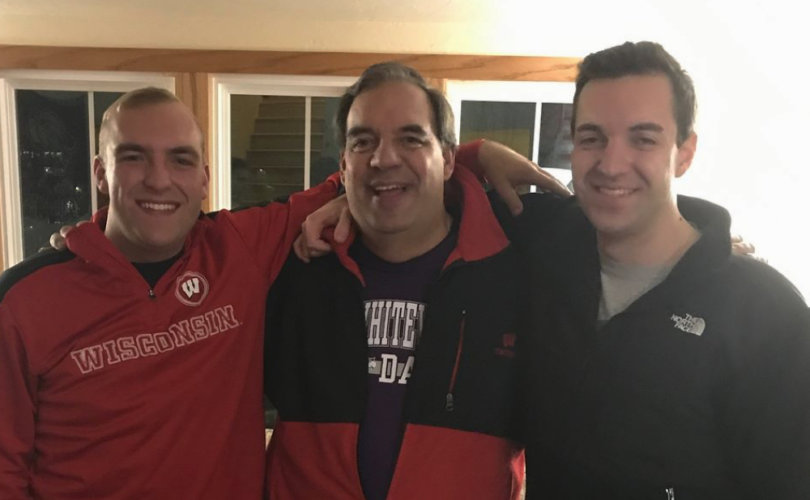 Randy Mack with his two sons.LifeSiteNews

(LifeSiteNews) – During the Advent and Christmas Seasons, the Church provides us with a barrage of Old Testament passages from Sacred Scripture to help us recall the prophesies and prefigurements regarding the birth of the Messiah.

We hear from Isaiah that this child would be born of a virgin who would be both God and man. He would be born in Bethlehem, of the tribe of Judah, and in the line of David. And we see indications that a star would lead the wise men to bring him gifts.

As with all Divine Revelation, we are constantly reminded that God keeps His promises. This obviously happens in salvation history with the coming of Jesus Christ, but Our Lord is just as sure to continue fulfilling his promises to each of us along our journeys of life.

Last Thursday (12/16) I received a shocking phone call from my wife Anna that a dear friend of mine, Randy Mack had died suddenly and unexpectedly while cleaning up his yard removing sticks following a significant windstorm we had in our area.

I first met Randy several years ago after Anna had volunteered to teach 2nd grade catechism at our new parish. Randy, who worked with the high school confirmation students, met me with a warm greeting during an appreciation dinner, and displaying a suspicious degree of enthusiasm pressed me to join him for breakfast sometime soon thereafter.

After a several text messages, I relented, and met him at a local diner after Mass one day curious as to what his insistence was all about.

After some small talk, the 61-year-old father of three young adult children, proceeded to evangelize me, bringing up many of the most important topics regarding faith, salvation, and the necessity to be ready for one’s judgment at the moment of death. It was the type of conversation perhaps few people these days would be comfortable with, but his sincere goal was to reach out to a new person at his parish and help ensure he would be able to eventually die in a state of grace, accepting the gift of eternal life and avoiding—as Randy also very deliberately emphasized—the real possibility of hell.

At one point he broke out the Fifteen Promises of Our Lady to Christians Who Recite the Rosary in order for me to consider them. As tradition holds, these promises were given to St. Dominic who was born in the late 12th century, and thus, in some form they have been experienced and handed down to succeeding generations until now, witnessing to the positive experiences our ancestors have had with this devotion throughout the centuries.

Randy’s favorite promises, as I recall were #’s 5 & 11 where Our Lady pledges:

In addition, #7 states: “Whoever shall have a true devotion for the Rosary shall not die without the Sacraments of the Church.”

Randy had a tremendous zeal not only for the Rosary but for helping bring as many people as he could to Heaven. At some point, he must have had a significant encounter with Jesus Christ and received the gift of realizing that the Catholic Church in which he was raised and perhaps took for granted, was not only a nice thing to be involved in, but was the means the Lord Himself established for all of us to have (holy) communion with Him, who is “the Way (to Heaven), the Truth, and the Life.” For Randy, the thought of abandoning that Communion with Christ, and thus the Holy Trinity, and eternal life, was the most frightening outcome of one’s life.

For this reason, he lived with a sense of urgency to do whatever he could to help as many people as possible, including his family, friends, and community members to return to Communion with Jesus Christ through the sacraments of His Church.

Among many other activities, the former sales manager drafted an apologetic flyer he could offer for distribution providing a “Step by Step Process to Eternal Salvation,” and attended an ecumenical bible study where he regularly challenged his separated brethren on theological questions.

At his parish, he called every parishioner in the registry who had fallen away from the practice of their faith inviting them to return to Jesus Christ and His sacraments, and constantly encouraged anyone who would listen, including his confirmation students, of the importance of always being ready to die and face particular judgment.

One student wrote in a card on a remembrance board displayed at Randy’s wake: “I Learned a very important thing you said, it is always to be ready.”

Perhaps it is the case, that out of a type of mercy for everyone in Randy’s life, God permitted his sudden and early death to be a dramatic and unforgettable example of this most important lesson he strove to convey to us all.

Finally, in his tireless efforts, during a recent confirmation class, Randy went through the promises of Our Lady(shown above) for those who are faithful to praying the Holy Rosary including that they “shall not die without the Sacraments of the Church.”

The day of Randy’s death

There was nothing out of the ordinary happening in Randy’s schedule last Thursday when he died.

As was routine for him, he served morning Mass, and then, sometime after, joined the ecumenical Bible study where he and his friends were focusing on the Book of Ecclesiastes. Whatever the particular verses were, Randy offered his interpretation with his typical loving conviction: that the message of the text was that each of us must be ready to die and face our judgement at every moment.

Following this he went home and found his way out to the yard to clean up and collapsed. A neighbor dialed 911 which was then dispatched to the fire department where a Catholic friend took the call and contacted a priest immediately. A local parochial vicar, who knew Randy well, arrived at the hospital swiftly administering Extreme Unction to him, along with the Apostolic Blessing, at which point Randy Mack died.

I later discovered that the evening before his death, Randy took his confirmation students to Confession and received this sacrament as well.

Though no one would have worried about Randy’s salvation without these final sacraments, it is fitting that God would fulfill this promise of the Rosary for all to see, by providing this faithful son with the sacraments of Confession, the Holy Eucharist, and Extreme Unction in the last 20 hours of his life on earth, witnessing to us all that God always fulfils his promises.