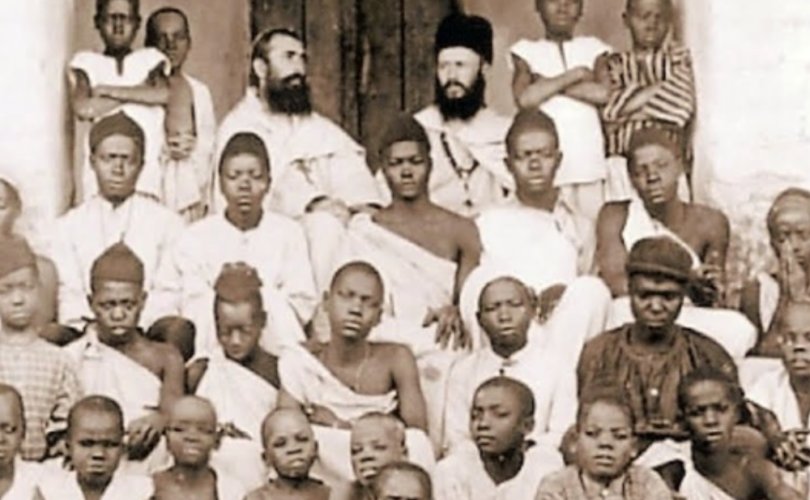 NAMUGONGO, Uganda (LifeSiteNews) – Located 2 miles from Kampala, the capital of Uganda, the village of Namugongo is home to what is considered one of the holiest places for the Catholic Church in Africa. A visit to this place, especially the Shrine that towers over the lush green that surrounds the swamp known by the locals as the “Martyrs’ Lake,” is a serene and edifying experience. The place is perfect for a retreat and authentic spiritual encounter with our Lord.

However, on June 3 every year, this little village plays host to what is arguably the largest annual pilgrimage of Catholics on this continent. Pilgrims from all walks of life, Protestants as well as Catholics, dozens of bishops and hundreds of priests vested in red, state dignitaries, foreign pilgrims, tourists, and millions of ordinary Ugandans descend on Namugongo to celebrate the heroic witness of 22 young men who, having accepted Christ, braved all horror meted out by their ungodly sovereign, culminating in a holocaust on this ground on June 3, 1886. This is an all too familiar story for the Catholic Church: martyrdom is always the first fruit of new evangelism, and Uganda was no exception.

143 years ago, this Kingdom of Buganda under the leadership of Kabaka (i.e., King) Muteesa I welcomed the first missionaries. This was a group of the Missionaries of Africa (White Fathers) notable among whom were Father Simon Lourdel (“Mapeera”) and Brother Amans Antoine Delmas (“Amansi”). They embarked on a missionary project centered around the king’s court since they were considered his guests. What followed was a string of converts drawn first from the pages but later from other areas of the Kingdom. Soon the mission boasted of tens of converts, young and old. Even the king’s closest confidant was converted. The zeal of these catechumens, coupled with the initial support of the king, who gave them land close to his palace, worked in favor of the mission, but soon the forces of darkness and falsehood would strike back.

READ: Pelosi applauds drag queens, says ‘your freedom of expression is what America is all about’

The King was liberal in his approach to religion, and this led to competition among the Muslims, Anglicans, and Catholics for both the King’s favor and new converts. However, this was nothing compared to the hatred that arose among the followers of the traditional religion who derided the Christians for calling the local religious practices satanic. The “abasomi”(i.e., “readers/learners” as the converts were called) were seen as traitors and rebels who had abandoned their ancestors. This volatile atmosphere, coupled by the hostility of the King, forced the White Fathers to abandon the Rubaga mission and return to Bukumbi in Tanzania in 1882

The Fathers returned on July 30, 1885 after the death of Muteesa I, but their hopes for a stable kingdom would soon be dashed by a worse reality than the one they had fled.  For the moment, the Christian community was under the leadership of Joseph Mukasa Balikuddembe and still thriving despite the prevailing climate. Their numbers had grown, and the mission had converts in places dozens of miles from the palace. The Christians met in secret to avoid the wrath of the King and their fellow countrymen.

The new Kabaka, Mwanga, was wary of the influence of the new religion and resented the zeal and loyalty his subjects paid to some authority other than his own. This hatred was exacerbated by the refusal of the converted pages to submit to his sexual advances. This prompted the king to launch a rigorous campaign to purge the kingdom of the Christians.

This had begun on January 31, 1885, when 3 Anglicans were killed at Busega, a village near the Anglican mission. From then on, any display of the Christian faith was an act of treason. Zealous converts attending Mass in the dark, clandestine meetings, and fearful missionaries administering to their flock under cover of darkness became the norm. Death always awaited if they were captured but their fortitude, a gift of the Holy Spirit, inspired even more followers amidst the challenges of the time.

In October 1885, James Hannington, an Anglican bishop, was murdered in Busoga, a nearby chiefdom, by order of Mwanga. Joseph Mukasa Balikuddembe, one of the King’s advisors, was angered by this act and, out of charity, criticized the king for it. This begun a series of events that would lead to Balikuddembe’s execution on November 15, 1885, at Nakivubo in Kampala. The great persecution was now in full swing, and anyone caught practicing the ‘White man’s religion’ had to choose between obeying their King and their faith.

To the utter disappointment of the King and the chiefs who had recommended them for the King’s service, the converts kept their new faith and defied their king. Their speared, hacked, dismembered, and burnt bodies littered the area around the King’s palaces of Munyonyo and Mengo (Kampala). These included an assistant county chief, Matthias Mulumba, who met his glorious end on May 30, 1886 in Kampala. Converts were hunted as far as Mityana, 43.5 miles from the king’s palace, where Noa Mawaggali was speared, tied to a fig tree, and eaten by dogs.

These horrors had not been enough to stop the Work of God in this land, and the king sought to quash the zeal of the abasomi in one final, gigantic display of anger. On May 26, 1886, Mwanga summoned the 26 pages who had converted to Christianity to Munyonyo and ordered them to make one final choice between Christianity and their king. When the converts chose Christ, the king ordered them to be herded to Namugongo, one of the official execution grounds. They were to be burnt alive on a big pyre as a lesson to the rest.

The story of their judgement is a dramatic one. The King ordered the ‘abasomi’ to one side, at which point Charles Lwanga, the de facto leader of the converts, took Kizito (the youngest) by hand and went to the side ordered by the king. Others joyfully followed him. They were then tied up and taken to Namugongo.

The perilous journey from Munyonyo to Namugongo saw 3 of the 26 pages martyred. They encouraged their comrades to march on valiantly, comforted with the promise of meeting in heaven. At Namugongo, the group, which was comprised of 13 Catholics and some Anglicans, was imprisoned as the executioners prepared for their horrendous spectacle. This took until June 2, 1886. The following day, which fell on the Feast of the Ascension of Our Lord Jesus Christ, the converts were led out to be burnt on a large pyre specially made for an execution of that magnitude. Charles Lwanga was separated from the rest and burnt on a slow painful fire at the spot where the altar of the Catholic Basilica now stands. He is reputed to have said, “You are burning me, but it’s as if you are pouring water over my body.”

The rest of the spectacle played out at the ground where the Anglican shrine was later built. The young men sang, prayed, and said joyful goodbyes to one another as the flames consumed them one by one. After this brutal exercise, the executioners cleaned their tools in a swamp which has now become the ‘Martyrs’ Lake’ at the Catholic shrine.

The bystanders, amazed by the joy and courage of these young men in the face of the King and their desire to meet death rather than abandon the Christian faith, decided to seek out the missionaries for counsel, and many were converted. The persecutions slowed down after that, but on January 27, 1887, another young man, John Mary Muzeyi, was beheaded by order of Mwanga, and his body was dumped in a swamp near the palace. He was the last of the group of martyrs in the Kingdom of Buganda. Turmoil in the Kingdom made the King very busy, and executions of Christians were then abandoned for more pressing matters.

The Martyrs were beatified in 1920 by Pope Benedict XV and subsequently canonized in 1964 by Pope Paul VI. To this day millions of Catholics the world over are drawn to the witness of these Martyrs, saints and ancestors in faith for Sub-Saharan Africa and a living testimony of the miraculous operation of the Holy Spirit in His Church.

Holy Martyrs of Uganda, pray for us!