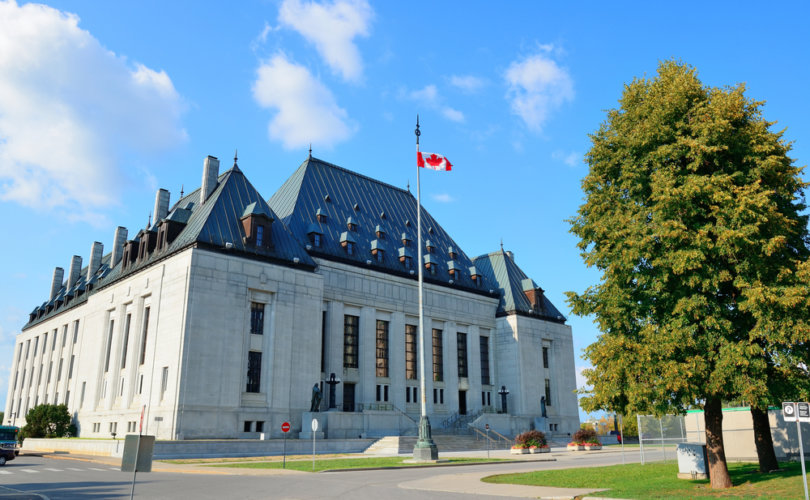 It was that wise analysis that popped into my head when I logged into Facebook yesterday and scrolled past dozens of stories from around the world, all announcing that the Canadian Supreme Court had just declared that “most bestiality is legal,” in the words of Britain’s Independent. I wasn’t particularly enthused that Canada’s last prance across world news was brought on by our freshman prime minister’s smug stammerings and shirtless pics, but it seems new lows can always be achieved.

The court case that brought this bizarre topic into the headlines is even more disturbing. Reader discretion is advised:

While bestiality is a criminal offence in Canada, the top court ruled the legal definition is much more limited than how it has been interpreted for decades. It all goes back to the 1800s Church of England trying to ban any sex acts that were seen as unnatural.

Over the years the Criminal Code of Canada changed but the definition of bestiality was never explicitly expanded. The court found in a 7-1 ruling Thursday that there needs to be penetration involved for an act with an animal to be a criminal offence.

“There is no hint in any of the parliamentary record that any substantive change to the elements of the offence of bestiality was intended,” the Supreme Court ruled.

The case before the Supreme Court involved a man who sexually abused his teenaged stepdaughters. On multiple occasions he forced them to put peanut butter over their genitals so the family dog would lick it off.

This Supreme Court decision on whether or not the particular sex acts in question qualified as sex is the canine equivalent of a teenager rounding third base but saying, “Ha. It doesn’t count!” It’s hard to know where to start with this. I can’t actually quite believe that this happened, much less that it demands analysis. But it’s #2016, so here we go:

1. It gets rather exhausting for Christians to point out, over and over again, that when we eliminate all standards for what is and what is not a healthy and moral sexuality, society must inevitably permit (if not endorse—but certainly not judge!) most things. The sages of the Sexual Revolution laughed mockingly when Christian intellectuals pointed out that the descent we had embarked on would end with things like bestiality, and now here we are. The fact that supposedly solemn and intelligent people in regal robes would sit around quibbling about which sex acts with animals actually constitute bestiality is one of the most single depressing images I can conjure up in my mind about the future of Western civilization.

2. Libertarian ideology inevitably ends up condoning such things. I remember a few years ago one of my libertarian university pals saying, with genuine pain in his voice, that he wished there was something in libertarian ideology that could condemn all forms of non-harmful (is there such a thing?) bestiality, but he couldn’t find it. That’s because libertarianism is a cute ideology that inevitably morphs into libertinism in practice, and mainly functions as social license for fiscal conservatives who don’t care about social issues. Sort of like when possible Conservative leadership hopeful and reality TV star Kevin O’Leary told Ezra Levant at the Conservative Party Convention that on social issues, he didn’t care “if you wanted to marry a goat.” Had he known about this development, I think he would have chosen his words somewhat differently.

3. Which brings me to the Supreme Court itself. While the name Trudeau conjures up for many the visage of a dynasty determined to repudiate the Judeo-Christian view of sexuality, it’s important to remember that again, Justin Trudeau did not appoint this Supreme Court. The majority of the judges on the Supreme Court that gave us euthanasia and is now saying some sex acts with animals don’t really count as bestiality were appointed by Stephen Harper. That’s why it’s so important to focus on electing politicians with social conservative values, not libertarians who find us temporarily convenient as a stepping stone to power. On every issue concerning the moral fabric of our country, libertarians are not on our side. Harper’s “libertarian” court has pushed Canada further in the wrong direction than any court since R. v. Morgentaler, and Stephen Harper’s Supreme Court justice selections were the most devastating blow to social conservatism in decades. The Conservative Party of Canada fooled so-cons once. We would do well to be more careful next time around.

4. For those who think there’s nothing to worry about and that it’ll all blow over, consider this: 32% of boys and 18% of girls have seen bestiality online by the age of 18. So half of teenagers have seen the types of things the Supreme Court is ruling on. Pornography is the great equalizer, and it has already infected the minds of millions and normalized sexual behaviors that would have been considered reprehensible only a generation ago. If you haven’t porn-proofed your home and your life yet, get on it.

5. For once I agree with the animal rights activists, who are outraged by the Supreme Court decision. They, too, cannot quite grasp how the Supreme Court managed to lack the basic morality and human decency to affirm charges against a sadistic pervert who tortured children and exploited animals. Finally, some common ground.

My suspicion is that Parliament will clarify for the empty robes over at the Supreme Court that bestiality does, in fact, include all sex acts with animals. But the very fact that we’ve had to have this discussion in the first place is a truly vomit-worthy indication that Canada’s moral compass is spinning wildly in every direction, and that our judiciary has gone to the dogs.