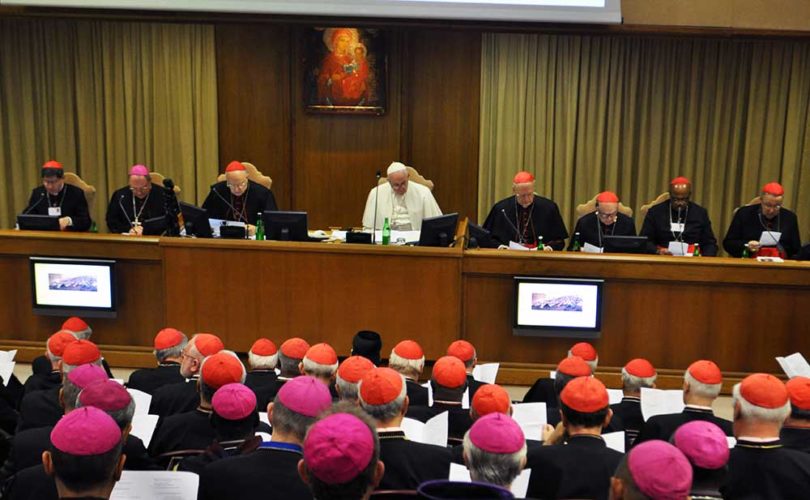 ROME, November 2, 2015 (LifeSiteNews) — Former Church documents were often staunch and also pugnacious – a counterpoint to those false prophets who flatter the ears and lull the souls as they unwittingly stagger into the abyss. In the face of the recurrent dangers of the world, the Church preferred plain speech, without the feel-good lyrics coming from the field of special-needs education. But, this has now changed. For, the Church now wants to take more seriously the current life realities. And she wants to use a new language which does not condemn or exclude anyone.

How this will probably work the document of the Synod of Bishops itself proposes to present to us. For example, the call to convert and not to sin anymore withdraws into the background. Now, it is more about “crescita,” about our growth. It is about “maturazione,” about our maturation. The Church now wants to “accompany” us in this maturation process, rather than to reprimand us. In the spirit of meekness, she wants to help us to “differentiate.” This kind of speech is well-received in the Church's mainstream, especially among those Catholics who consider themselves to be progressive. Heaven and Hell? No, let us rather talk about “images of reconciliation and of fear.” Good and evil? Objective sin? No, rather “gradual realizations” of the ideal. This is also a politically correct language which will not and should not unnecessarily frighten the little sheep. But, does the Church really take us seriously by resorting to this form of linguistic turn – namely, as modern and enlightened people?

For Immanuel Kant, the Enlightenment was to be “man's emergence from his self-imposed immaturity.” Today, however, many may already consider themselves to be now mature and already enlightened. However – did this psychological fact yet reach the Church? Barely, when one prefers to use expressions such as “crescita” and “maturazione,” rather than words like growth and maturation. Because, if one is in need of growth, one is not yet an adult. And only immaturity is in need of maturation. In certain ways, we all, of course, need to grow and mature. But, then, that also applies to the human beings in the Church's leadership. With the exception that they, however, do not consider themselves to be on the same level as we are – because they somehow already know, exactly, in which direction we still have to grow. In essence, the Church now tells us with her new language: “I shall help you to mature and to become adult – just as mature and adult as we shepherds already are.”

Does one really dare to speak like this, if one has truly understood postmodernity? If one is seeking new paths for the Proclamation of the Gospel that are suitable for our time? The Church wants more openness to the world and more closeness to the life realities. But nevertheless, this pastoral cotton candy which she now offers cannot hide the truth that she finally does not take contemporary man seriously. Rather, it is now the case that she speaks condescendingly “from above.” Admittedly, this is perhaps unavoidable, since one proclaims a Divine Truth which is larger than man and therefore comes always “from above.” But then the Church should say it openly, instead of playing – or seeming to be – the secretive know-it-all. Whoever wants to be taken seriously cannot reach such an objective if he is a pedagogical cleverling, but only if he himself takes other people seriously. He has to understand the self-confidence and self-understanding of the enlightened contemporary. The enlightened contemporary does not feel especially guilty. He is not desperately seeking that form of mercy which the Church purportedly has refused to grant him for so long. If he wants anything from the Church at all – instead of just being left alone – then he rather expects from the Church a kind of moral support for his current way of life, and for the standards which are considered to be good by the predominant culture. Most people I know, in any event, consider themselves to be critical of religion, to be relatively well informed and to be quite independent – and certainly not as being immature patients which are in need of growth. As to the soft universal therapy and the non-judgmental “special education”: these are not signs for an increase of the knowledge of reality now so newly attained within the Church. No, these are not signs of an opening, but, rather, signs of an infantilization. As it seems, one now wishes to take us by the hand – like children – so that we may grow and mature. Pure paternalism.

The former conduct of the Church was in this respect much more honest. With her plain speech, she took us seriously. In the Old Testament, Book of Deuteronomy (30:19), it says: “I call heaven and earth to witness this day, that I have set before you life and death, blessing and curse. Choose therefore life, that both thou and thy seed may live.” This is no paternalism, but, rather, we are taken seriously here in being presented with a clear alternative, blessing or curse, life or death. One treats us as responsible people and thus presents us with a choice. One assumes that we have the required degree of maturity in order to be able to differentiate between Good and Evil – just as Jesus does in the Gospel of St. Matthew (5:37) when He claims: “But let your speech be yea, yea: no, no: and that which is over and above these, is of evil.”

When a Synod in Rome – with more than 270 bishops and cardinals in attendance, and also after intensive weeks of work over the course of two years – finally comes to present its document of consensus, it is obvious that it cannot deepen our understanding of all the questions and also present them in an especially clarifying manner. But, after having distributed two large-scale, world-wide questionnaires concerning marriage and the family – with the help of which one had intended to listen to the opinion of the people of God – it is indeed disappointing that the main goal of the Synod was missed. For, one should have better come to understand the life realities in which most families live today, in which they love, work, and fight. One had wanted to understand modernity better, in order to respond better to these realities. Instead – 200 years after Immanuel Kant – one has now fallen behind the self-conception and self-understanding of the Enlightenment and one now, instead, paternalizes us in a way such as Jesus never did. This is regrettable.

Giuseppe Gracia is the spokesman and public relations advisor of the Bishop of the Diocese Chur, Switzerland, Vitus Huonder. He articulates here his private views. The article is translated by Maike Hickson.