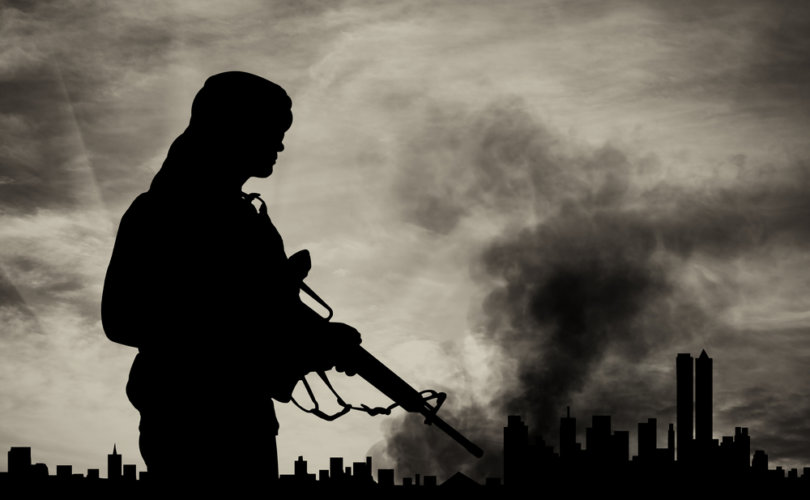 August 30, 2016 (BreakPoint) — Terrorism is not yet a daily occurrence, but this summer, it almost began to seem that way. On July 26, a Catholic priest in Saint-Etienne-du-Rouvay had his throat slit. A few days earlier, nine people were murdered in a Munich shopping mall. A few days before that, a terrorist attempted to hack to death four people traveling on a German train. And a few days before that, in Nice, 84 innocents celebrating Bastille Day were mowed down by a terrorist in a truck, who swerved back and forth to kill as many people as possible.

And that was just in July. Just a few days ago, ISIS terrorists blew up a wedding party in Turkey, killing fifty people, around half of them children, and wounding the bride and groom.

President Obama still refuses to identify these murderers as Islamic extremists, despite the fact that the entire world knows that’s exactly what they are. Instead, he refers to those who slaughter people in Orlando clubs, or at San Bernardino Christmas parties, or in Paris cafes, as “violent extremists.” (My sons, when very young and fighting ferociously over a toy, could also quite accurately have been described as “violent extremists.”)

Does it really matter what they’re called? Absolutely, says an authority on counterterrorism, Dr. Sebastian Gorka. “As long as the most basic strategic questions—Who is the enemy? Why are we fighting?—remain unanswered, victory is impossible,” he writes.

In his new book, “Defeating Jihad: The Winnable War,” Dr. Gorka notes that our enemy is not “terror” or “violent extremism.” Our enemy is “the global jihadi movement, a modern totalitarian ideology rooted in the doctrines and martial history of Islam.”

Dr. Gorka knows quite a bit about totalitarianism: The Soviets locked up his father in a Hungarian prison for daring to fight communist ideology. Before his imprisonment, his father witnessed Nazi totalitarianism. Now, his son writes, “the totalitarians are back. This time [they] invoke the name of God, as opposed to the working class or the Fuhrer, but they are back, and they will either kill us or enslave us.”

While the global jihadist movement “may not yet have tank divisions at its disposal, as Hitler did, or thousands of nuclear weapons as did the Soviets,” Gorka explains, “it has something much more important: a religious fervor combined with an un-western degree of patience that produces a lethal and unbelievably resilient commitment to its cause.”

The wars in Iraq and Afghanistan may have rid the world of Saddam Hussein and much of the Taliban, but have they led to increased safety of American, French, or German citizens, or those who live in the Middle East or Africa? Clearly not. Neither has Obama’s “whack-a-mole” (as Gorka describes it) drone strike approach.

This is because the late Osama bin Laden successfully changed the definition of “jihad” “from guerrilla warfare in faraway lands to the mass murder of civilians on the soil of Western nations,” Gorka writes. And they are using Western tools to accomplish this. Jihadists attract and train followers through such resources as INSPIRE, an online do-it-yourself jihadist magazine which combines the “ideological and theological justification for attacks . . . with the training material and technical knowledge to . . . execute mass-casualty attacks.”

I looked up INSPIRE online (probably getting myself put on a no-fly list as a result) and found a number of deadly “recipes,” along with advice on which targets to hit in various countries–including Nice during the Bastille Day events–and in America.

The global jihadi movement is “by far the most dangerous irregular warfare organization ever,” Gorka writes, partly because they are so rich. The Islamic State’s criminal activities bring in millions of dollars daily. More ominously, “29 percent of the ISIS supporters caught or killed in the United States saw no need to go anywhere to become a jihadi. They had decided that the best way to serve the new caliphate . . . is to kill Americans here at home.”

How does America go about defeating Islamic extremism? By looking to the lessons of the past, to how the West defeated other forms of totalitarianism. For instance, to fight the expansion of communism, American leaders decided to “strengthen America’s allies, promote democratic values, and encourage resistance to communism, which would eventually cause communist dictatorships to crumble from within.” Within four decades, the Soviet Union was history.

In fighting this new war, we must “deploy the truth,” Gorka says. No more political correctness and ideological prejudice; no more nonsense about terrorism being the consequence of poverty and other social ills. And we must make it clear that we are NOT at war with Islam itself, he emphasizes, pointing out that the people most in danger of extermination by jihadis are nonviolent, non-extremist Muslims of the Middle East.

America’s next president “must initiate a strategic-level counterpropaganda campaign from inside the National Security Council” with the objective of speaking “openly and truthfully about the enemy, acknowledging its true identity and ideological character.” We must use the term “jihadist” to describe groups like the Islamic State. And, like Ronald Reagan, who didn’t hesitate to call the Soviet Union an evil empire, America’s next president must paint jihadists as unequivocally evil.

This truth-telling should be matched by “a massive counterpropaganda campaign . . . targeting, responding to, and delegitimizing the jihadist propaganda that is flooding the Internet.”

In addition, America must work to strengthen the position of our allies and partners in their counterpropaganda efforts—courageous Muslims around the world who risk their lives “arguing on the Internet against the seventh-century version of Islam that groups like Al Qaeda and the Islamic State represent.”

Gorka also tells us how to evaluate both major presidential candidates in terms of their commitment to protecting America from Islamic extremism, and provides a thoughtful explanation of the rise of the modern jihadi movement in Afghanistan following the Soviet invasion there. Interestingly, he does not address an issue that has become a big part of the presidential campaign: whether or not America should continue to allow Muslims to travel to America, or to be relocated here from Syria by the tens of thousands.

These are valid questions, and Christians should be looking to their faith for guidance in answering them. In Romans 13, we are taught that the role of government is to restrain evil and protect the good—which suggests that we should be wary of allowing potentially dangerous people into our country, just as we restricted the entry of German and Japanese aliens into America during the Second World War. But we are also told throughout the Scriptures to be compassionate to strangers and to the poor and suffering—which suggests that we should find creative ways to relive the suffering of the world’s people. In the past, we've proven ourselves capable (as with the Berlin Airlift) of saving the lives of people around the world, not just here at home.

Americans have defeated totalitarian enemies before, and we can do it again. But we can do so only if we put our intelligence to good use—and our faith as well.

Anne Morse is co-author of “My Final Word” with Chuck Colson, and “Prisoner of Conscience: One Man's Crusade for Human and Religious Rights” with Frank Wolf. She lives in Maryland.