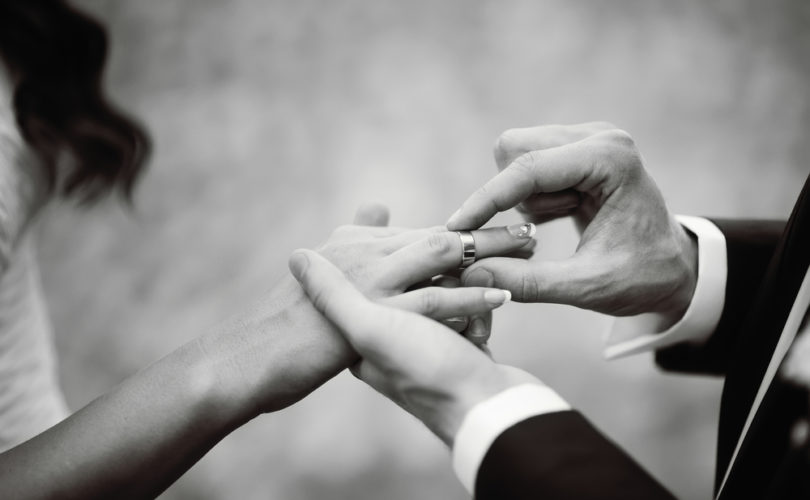 February 11, 2016 (HLI) — One of the most contested issues in this still young century is the nature of marriage. Those who do not believe that all human beings have a common nature, or in a law that emerges from that nature, have attempted to redefine marriage. While this is impossible, the innovators have certainly confused many in society as to its definition and have won several victories in the courts and legislatures.

The one who is anchored in the natural law tradition, however, sees clearly that marriage is inscribed in our nature. It is a lifelong and exclusive union of one man and one woman for the purpose of begetting, rearing, and educating children; and for providing mutual love and support between spouses.

The starting point for the defense of marriage, on the natural law view, should be the fact that all men are grounded in the same nature. The existence of this nature is clear: Man has the ability to understand the physical and ethical laws of the natural order. This fact has been affirmed by countless thinkers of various traditions, and has been recognized by the Magisterium of the Church, as will see below.

Human nature becomes even more evident and capable of being experienced through its effects. All men have the same inclinations towards the good, or what they perceive as and defend as good, and the desire to avoid evil. At the same time experience shows that man can have appetites or feelings that are contradictory with the true good. Here we have the internal struggle common to all men—one that all must wage in the pursuit of the true good. (This experience also, by the way, indicates the reasonableness of the doctrine of original sin.)

This common nature is the basis of claims to the equality of all men—claims that point to a shared dignity rather than shared abilities, which would be absurd. The existence of a shared common nature between all men around the world throughout history permits a rational communication and a fraternal relation between all human beings. If each culture around the world were to produce substantial changes in the nature of men, we would be placed in different hermeneutical circles that would impede a substantial communication. But communication is possible because beneath a thicker or thinner socio-cultural veneer we all possess the same fundamental inclinations, anguishes and hopes.

This nature is the cause of the principles that regulate the operations of human persons, principles which we call the natural law, which in turn tells us something very concrete about how men ought to behave. Human persons should act in accordance with what brings this nature to its completeness. Thus can we arrive at a formulation of the natural law: “Because human nature contains certain characteristics, human beings ought to do or behave in accordance with those characteristics.”

The natural law has long been under attack by many different sources. Certain Lutheran and Calvinist thinkers exaggerated the effects of original sin, arguing that human nature had totally decayed as consequence of the sin of our first parents and so it was unable to know or discern a universal moral law. Close on the heels of the Protestant revolution were Enlightenment thinkers, who saw men as autonomous individuals that could not be ruled by a law that they had not previously accepted. It is easy to see how this led to a liberalism that brought about subjectivism and the rejection of an objective moral law. Further, the cultural nationalism of the nineteen century placed an undue emphasis how man is molded by the history of his own culture so that profound differences can be found between men at the level of their very nature.

All of these ideological revolutions have led to an attitude of growing skepticism with regards to the possibility of the existence of and knowledge of a universal natural law. Against these wrong approaches we have to insist on the fundamental point that cultural differences—many of which are indeed profound—are accidental and not substantial. That is, these differences are not at the level of human nature, but at the cultural level.

At the same time, it is clear that there is an overall global culture inspired in liberalism and relativism that denies an objective natural law. The contemporary rejection of universal natural law was addressed in a magisterial way by St. John Paul II in Veritatis Splendor:

It must certainly be admitted that man always exists in a particular culture, but it must also be admitted that man is not exhaustively defined by that same culture. Moreover, the very progress of cultures demonstrates that there is something in man which transcends those cultures. This “something” is precisely human nature: this nature is itself the measure of culture and the condition ensuring that man does not become the prisoner of any of his cultures, but asserts his personal dignity by living in accordance with the profound truth of his being. To call into question the permanent structural elements of man which are connected with his own bodily dimension would not only conflict with common experience, but would render meaningless Jesus’ reference to the “beginning”, precisely where the social and cultural context of the time had distorted the primordial meaning and the role of certain moral norms (cf. Mt 19:1-9). This is the reason why “the Church affirms that underlying so many changes there are some things which do not change and are ultimately founded upon Christ, who is the same yesterday and today and forever. (Veritatis Splendor, #53)

The loss of confidence in our ability to know a natural law leaves man defenseless against the arbitrary use power or ideological manipulation. Whoever is in power will try to impose his will without the objective checks and balances that comes from a law that is grounded in our being. If we do not have law that regulates human behavior that precedes and grounds positive law, legislation often becomes only a compromise between different interests that may or may not lead to greater justice and flourishing. This will to power, which may have a thin democratic veneer, seeks to transform private interests into law that often conflicts with the duties deriving from natural law.

Positive laws obtain their legitimacy if they are in accordance with the law that we have inscribed in our being. As Benedict XVI pointed out in a 2007 address to the International Congress on Natural Moral Law,

Therefore, no law made by man can override the norm written by the Creator without society becoming dramatically wounded in what constitutes its basic foundation. To forget this would mean to weaken the family, penalizing the children and rendering the future of society precarious.

Even within the Church we see how the forces of relativism are active, though such positions were denounced by Cardinal Ratzinger in his well-known homily at the Mass “Pro Eligendo Romano Ponfice” just before he was elected pope. This relativism leads to the rejection of natural law based on the supposed authority of varying cultures to which one belongs. Such contradictory moral pluralism is contrary to the will of God, the Source of the universal natural law. In these times of confusion the Catholic principle of discernment to which we should hold was formulated many centuries ago by Cesareo of Arles: “What has been always, everywhere and from all believed and practiced.” The categories always, everywhere, all should not to be understood in an arithmetical sense, but rather in a moral sense how certain basic beliefs have dominated in flourishing societies throughout history.

From a theological point of view, we Christians firmly believe that man was created in the image and likeness of God, as we see in Book of Genesis. The image that God the Father had in His mind as the “builders model” we see in His only begotten Son. And if all human were created in this Image, we are substantially equal and the same law applies to all of us.

The demands of natural law are written on the hearts of all men (Rom. 2:15), so we can affirm that this law is accessible to all men of good will. St. Thomas Aquinas explains that this law is “nothing else than the rational creature’s participation in the eternal” (S.T. I-II.94). The Angelic doctor also explains this is “the light of understanding infused in us by God, whereby we understand what must be done and what must be avoided. God gave this light and this law to man at creation”. (In Duo Precepta Caritatis en Cecem Legis Precepta, Prologus: Opuscula Theologica, II, No. 1129, Ed. Taurinen (1954), 245).

Last but not least we note that the Magisterium of the Church has constantly defined that we have to believe on the existence of natural law. Without making an exhaustive presentation of this Magisterium, we should mention the Dogmatic Constitution “Dei Filius” of the First Vatican Council that in its chapter fourth makes an eloquent presentation of the role of faith and reason in the knowledge of the Truth, and even warns against dissent on the issue:“If anyone says that the one, true God, our creator and lord, cannot be known with certainty from the things that have been made, by the natural light of human reason: let him be anathema” (Dei Filius, C. 2.1.).

The same point is made in several passages of the Constitution of the Church in the Modern World of the Second Vatican Council, as well as the 1975 DeclarationPersona Humana, of the Congregation of the Doctrine of the Faith:

But in fact, Divine Revelation and, in its own proper order, philosophical wisdom, emphasize the authentic exigencies of human nature. They thereby necessarily manifest the existence of immutable laws inscribed in the constitutive elements of human nature and which are revealed to be identical in all beings endowed with reason.” (IV)

Though it is not only Catholics who defend and who argue for and from a universal and natural moral law, Catholics have in the Magisterium a wealth of clear thinking and support for the law. This law is based on the belief in the existence of a common nature for all men and the universality of the natural law has been affirmed many times by the Magisterium of the Church.