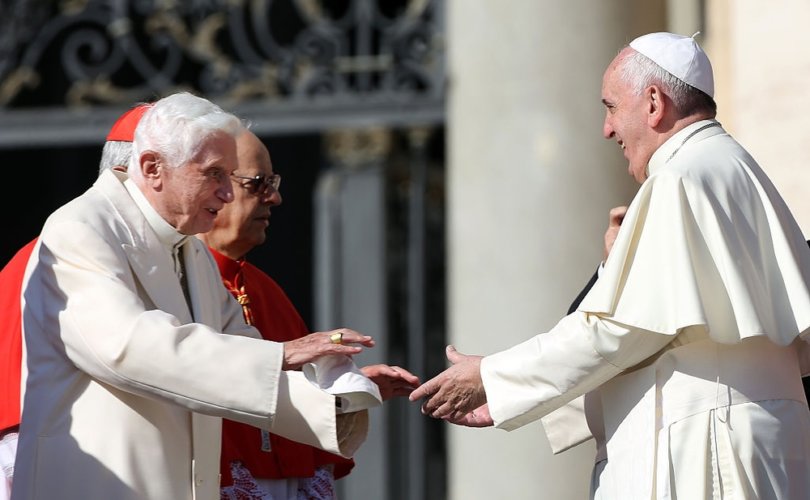 Pope Francis greets Pope Emeritus Benedict XVI as he arrives at St. Peter's Basilica during a celebration for grandparents and the elderly on September 28, 2014 in Vatican City. Franco Origlia/Getty Images

July 3, 2020 (Rorate Caeli) – The demission of Benedict XVI will be remembered as one of the most catastrophic events of our century, as it opened the door, not only to a destructive pontificate, but above all to a situation of increasing chaos in the Church.  After seven years since that disastrous February 11, 2013, the life of Benedict XVI and the pontificate of Pope Francis are drawing inexorably to a close. We don’t know which of the two events will precede the other, but in both cases, the “smoke of Satan” risks enveloping the Mystical Body of Christ as perhaps has never happened in history.

The Bergoglian pontificate has reached its end, perhaps not from a chronological point of view, but most certainly from the point of view of its revolutionary impact. The Post-Amazonian Synod has been a failure and the Exhortation Querida Amazonia of last February 2, was the tombstone placed on the many hopes of the progressive world, mainly in the German zone. The Coronavirus, or Covid-19, has definitively brought to an end the ambitious pontifical projects for 2020, presenting us with a historical image of a solitary and defeated Pope, immersed in the emptiness of a spectral St. Peter’s Square. On the other hand, Divine Providence, which always regulates all human events, allowed Benedict XVI to witness the debacle following his abdication.  But the worst is probably still to come.

It was logical to envision that with the cohabitation of “two Popes” in the Vatican, a part of the conservative world disgusted with Francis would have looked to Benedict, considering him the “true Pope,” set against “the false prophet.” Whilst convinced of Pope Francis’s errors, these conservatives didn’t want to follow the open way of the Correctio filialis delivered to Pope Francis on August 11, 2016. The real reason for their reluctance is probably due to the fact that the Correctio accentuates how the roots of the Bergoglian deviations go back to the Papacies of  Benedict XVI and John Paul II, and even before, to the Second Vatican Council.

For many conservatives, instead, the hermeneutic of John Paul II and Benedict XVI won’t admit any rupture, and since the Bergoglian papacy seems to embody the negation of this hermeneutic, the only solution to the problem is for Francis to be out of the picture.

And Benedict by giving himself the title Pope Emeritus, by continuing to wear white and imparting apostolic blessings, has engaged in gestures which seem to encourage this impervious work of substituting the new Pope with the old one. The princeps argumentation is however the distinction between munus and ministerium, whereby it seemed Benedict wanted to keep for himself a sort of mystical papacy, leaving Francis with the exercise of government. The origin of the thesis goes back to a discourse by Monsignor Georg Gänswein of May 20, 2016 at the Pontifical Gregorian University, wherein he stated that Pope Benedict had not abandoned his office, but had given it a new collegial dimension, rendering it a quasi-shared ministry (“als einen quasi gemeinsamen Dienst”).

It has mattered naught that Monsignor Georg Gänswein, in a declaration to LifeSiteNews on February 14, 2019, reaffirmed the validity of Benedict XVI’s renunciation of the Petrine Office, by stating that “there is only one Pope legitimately elected  – and it is Francis.”  By then the idea of a possible redefinition of the Petrine munus had been launched. And faced with the objection that the Papacy is one and undivided and cannot countenance any internal divisions, the response of these conservatives is that precisely this fact proves the invalidity of Benedict’s demission. They say that Benedict’s intention was that of maintaining the papacy, assuming the office capable of bifurcating in two; but this is a substantial error, since the monarchal and unitary nature of the Papacy is of divine right. Thus Benedict’s renunciation would be invalid.

It is easy to rebut that if it were proven Benedict XVI had the intention of splitting the papacy, by modifying the constitution of the Church, he would have fallen into heresy; and since this heretical conception of the Papacy would certainly be anterior to his election, the election of Benedict should be considered invalid for the same reason his abdication is considered invalid. He in no way would be Pope. But these are abstract discourses, since God alone judges intentions, whereas Canon Law merely limits itself in evaluating the outward behavior of the baptized.

A well-known sentence of canon law, referred to by both Cardinal Walter Brandmüller and Cardinal Raymond Leo Burke, affirms that “De internis non iudicat praetor”: a judge does not judge interior things. On the other hand Canon 1526, § 1 of the new Code of Canon Law points out that: “Onus probandi incumbit ei qui asserit” (the onus of providing the proofs falls to the one alleging). There is a difference between a clue and a proof. The clue suggests the possibility of a fact, the proof demonstrates the certainty. Agatha Christie’s rule whereby three clues are a proof, is fine in literature but not in civil or ecclesiastical courts.

Furthermore, if Pope Benedict is the legitimate Pope, what would happen if from one day to the next he should die, or instead, before he died, Pope Francis should pass away? Given the fact that many current cardinals were created by Pope Francis and none of the cardinal electors consider him an Anti-Pope, the apostolic succession would be interrupted, jeopardizing the visibility of the Church. The paradox is that to prove the invalidity of Benedict’s renunciation juridical  sophisms are employed, but then to resolve the problem of Benedict’s or Francis’s succession, extra-canonical solutions ought to be used.

The thesis of the French visionary Jean de Roquetaillade (1310-1365), whereby shortly before the end times, an “angelic Pope” would appear at the head of an invisible Church, is a myth spread by many pseudo-prophets, but never accepted by the Church. Is this the road that a part of the conservative world is embarking on?  It seems more logical to retain that the cardinals gathered together in conclave to elect a new Pope, after the death or the renunciation of the papacy by Pope Francis, would be aided by the Holy Spirit. And if it’s true that the cardinals might refuse the divine influx by electing a Pontiff worse than Pope Francis, it is also true that Providence might reserve unforeseen surprises, like it was for the election of Pius X or other great Popes in history.

What we need is a saintly Pope, even more than a “next Pope.”

With the title, The Next Pope, an excellent book by the English journalist Edward Pentin has just been released, published by Sophia Institute Press (The Next Pope: The Leading Cardinal Candidates). The principal merit of this work of more than 700 pages, is to remind us that there will be a “next Pope” and offer us all the information necessary to enter the post-Franciscan era, by means of 19 “papal candidate” profiles.

We need to be convinced that the hermeneutic of continuity has failed, since we are going through a crisis which must be measured on facts, and not on the interpretations of facts. “The implausibility of this approach,” Peter Kwasniewski correctly notes, “is demonstrated by, among other signs, the infinitesimal success that conservatives have had in reversing the disastrous ‘reforms,’ trends, habits, and institutions established in the wake of and in the name of the last council, with papal approbation or toleration.”

Pope Francis has never theorized the hermeneutic of “discontinuity” but has sought to implement Vatican II in praxis and the only winning response to this praxis is in the concrete reality of theological, liturgical, canonical and moral facts, and not in sterile hermeneutic debate. In this regard, the real problem will not be the continuity or the discontinuity of the next pontificate with Pope Francis, but its relationship with the historical knot of the Second Vatican Council. Some conservatives want to eliminate Pope Francis, by means of canonical loopholes, in the name of the hermeneutic of continuity. But if it’s possible to accuse a Pope for discontinuity with his predecessor, why not admit the possibility of the discontinuity of a Council with its precedents?

In this context, the recent interventions on Vatican II by Archbishop Carlo Maria Viganò and the Auxiliary Bishop of Astana, Athanasius Schneider, are to be appreciated. They have had the courage to face a theological and cultural debate which cannot be evaded. This work of historical and theological revision of Vatican II is necessary to dissipate the shadows thickening around the end of a papacy, and to avoid a division that might place good Catholics in front of a choice between a bad Pope, but legitimate, and an Anti-Pope of better doctrine, or “mystical,” but unfortunately illegitimate.

Translated by Francesca Romana and reprinted with permission from Rorate Caeli.