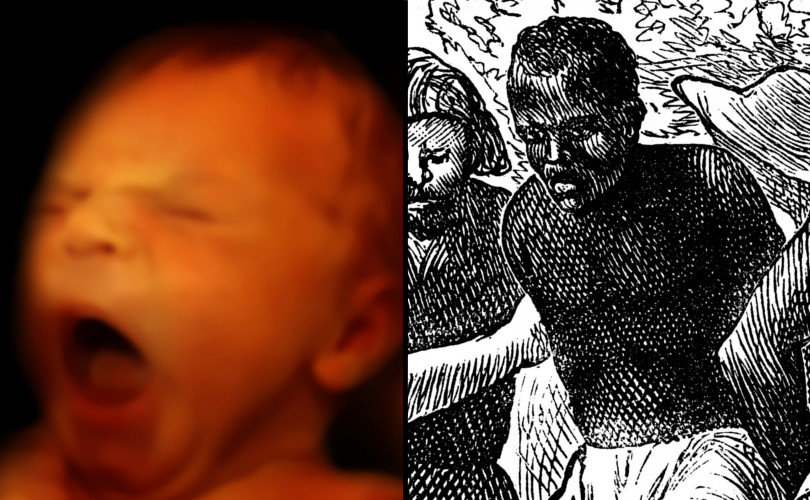 Oct. 7, 2013 (LiveActionNews.org) – Whenever a pro-lifer dares to compare abortion to slavery, pro-aborts go apoplectic. Candor about abortion’s horror is a major no-no, and besides, don’t we know that liberals have a monopoly on invoking bad things done to minorities? But fortunately, apologists not liking something isn’t a good enough reason for the rest of us to stop making a comparison that fits like a glove.

Both denied the humanity of an entire class of people

The core parallel couldn’t be more obvious. Fetuses may be killed at will, and blacks were held like cattle, because both groups were said to be somehow lesser than the rest of us. In the fetus’s case, it can be any number of factors – they’re just cells, lack consciousness, can’t feel pain, can’t survive outside the womb, etc. In the black person’s case, it was because of skin color, more primitive culture, and lesser mental faculties. In the words of Dr. Josiah Nott:

Both claimed to be on the cutting edge of human enlightenment

While Nott did invoke an odious theological rationalization of slavery, and there were certainly plenty of ostensibly God-fearing slaveholders (though let’s not forget Christianity’s key role in ending slavery, either), the truth is that slavery’s apologists also fancied themselves progressives, in much the same way pro-aborts cast themselves as paragons of modern reason fighting against knuckle-draggers who would turn society “backward.” But don’t take my word for it; take that of Alexander Stephens, Vice President of the Confederacy:

Our new government is founded upon exactly the opposite idea; its foundations are laid, its corner-stone rests, upon the great truth that the negro is not equal to the white man; that slavery subordination to the superior race is his natural and normal condition. This, our new government, is the first, in the history of the world, based upon this great physical, philosophical, and moral truth. This truth has been slow in the process of its development, like all other truths in the various departments of science. It has been so even amongst us. Many who hear me, perhaps, can recollect well, that this truth was not generally admitted, even within their day. The errors of the past generation still clung to many as late as twenty years ago. Those at the North, who still cling to these errors, with a zeal above knowledge, we justly denominate fanatics. All fanaticism springs from an aberration of the mind from a defect in reasoning. It is a species of insanity. One of the most striking characteristics of insanity, in many instances, is forming correct conclusions from fancied or erroneous premises; so with the anti-slavery fanatics.

Both claimed to have evolved past the Founding Fathers’ values

Pro-aborts sneer at the idea that the Declaration of Independence’s promise of “unalienable Rights” to “Life, Liberty and the pursuit of Happiness” entitles the unborn to any consideration. So did pro-slavers. In the same speech, Stephens openly celebrated the fact that the Confederacy was leaving the “old constitution,” and the Declaration’s author, in the dust:

Jefferson in his forecast, had anticipated this, as the “rock upon which the old Union would split.” He was right. What was conjecture with him, is now a realized fact. But whether he fully comprehended the great truth upon which that rock stood and stands, may be doubted. The prevailing ideas entertained by him and most of the leading statesmen at the time of the formation of the old constitution, were that the enslavement of the African was in violation of the laws of nature; that it was wrong in principle, socially, morally, and politically. It was an evil they knew not well how to deal with, but the general opinion of the men of that day was that, somehow or other in the order of Providence, the institution would be evanescent and pass away. This idea, though not incorporated in the constitution, was the prevailing idea at that time. The constitution, it is true, secured every essential guarantee to the institution while it should last, and hence no argument can be justly urged against the constitutional guarantees thus secured, because of the common sentiment of the day. Those ideas, however, were fundamentally wrong. They rested upon the assumption of the equality of races. This was an error. It was a sandy foundation, and the government built upon it fell when the “storm came and the wind blew.”

Both had advocates who hid behind the “personally opposed, but…” excuse

Squishier Americans try to have it both ways by insisting that they don’t like abortion yet feel it’s simply not their place to stop anyone else from doing it. Slavery’s apologists had their own variation of this, albeit on a different scale. Senator Stephen Douglas, Abraham Lincoln’s famous Illinois opponent, denied black equality but focused more on reframing the question around “popular sovereignty” – localities’ freedom to decide for themselves, independent of other communities’ decisions:

Both claimed it was for the victim’s own good

We’ve all heard pro-aborts’ chilling insistence that unwanted or disabled children might as well be disposed of nice and early because they’d just have rotten lives anyway. Pro-slavers would have agreed. Congressman and poet William Grayson wrote that while a free, paid worker is chained by endless “miseries,” “wants,” and “cares,” the chains were actually a pretty good deal for slaves:

Taught by the master’s efforts, by his care
Fed, clothed, protected many a patient year,
From trivial numbers now to millions grown,
With all the white man’s useful arts their own,
Industrious, docile, skilled in wood and field,
To guide the plow, the sturdy axe to wield…
Guarded from want, from beggary secure,
He never feels what hireling crowds endure,
Nor knows, like them, in hopeless want to crave,
For wife and child, the comforts of the slave,
Or the sad thought that, when about to die,
He leaves them to the cold world’s charity…

Both fantasized that opposition was a pretext for more sinister motives

Among pro-aborts’ more insufferable defense mechanisms is that we’re not really concerned for the unborn – that’s just an excuse to keep women barefoot and pregnant in the kitchen. The primary Southern revisionism contends that the Civil War was really all about economics and states’ rights, and at the time, sociologist George Fitzhugh leveled a similar accusation at abolitionists:

We warn the North, that every one of the leading Abolitionists is agitating the negro slavery question merely as a means to attain ulterior ends, and those ends nearer home. They would not spend so much time and money for the mere sake of the negro or his master, about whom they care little. But they know that men once fairly committed to negro slavery agitation – once committed to the sweeping principle, “that man being a moral agent, accountable to God for his actions, should not have those actions controlled and directed by the will of another,” are, in effect, committed to Socialism and Communism, to the most ultra doctrines of Garrison, Goodell, Smith and Andrews – to no private property, no church, no law, no government, – to free love, free lands, free women and free churches.

Both mocked concern for the victim as something dirty

Every once in a while, an especially charming pro-abort will stoop to hurling the epithet “fetus-worshiper” at us, as if we’re bizarrely obsessed with unborn babies, rather than simply believing it’s wrong to deny them the same protections everyone else already has. It’s hard not to be reminded of racist slurs like “n*****-lover,” or anti-abolitionists’ use of “Black Republican party” as an epithet.

Both were sustained by horrendous Supreme Court rulings

Fifty-state abortion-on-demand was forced upon the nation by Roe v. Wade, a pile-up of bad science, bad history, and bad law. Dred Scott v. Sanford similarly reinforced slavery by denying that even free blacks could attain citizenship, and forbidding Congress from restricting slavery in the territories. In response, Lincoln exposed the Court as relying on bad history and bad law:

I have said, in substance, that the Dred Scott decision was, in part, based on assumed historical facts which were not really true; and I ought not to leave the subject without giving some reasons for saying this; I therefore give an instance or two, which I think fully sustain me. Chief Justice Taney, in delivering the opinion of the majority of the Court, insists at great length that negroes were no part of the people who made, or for whom was made, the Declaration of Independence, or the Constitution of the United States.

On the contrary, Judge Curtis, in his dissenting opinion, shows that in five of the then thirteen states, to wit, New Hampshire, Massachusetts, New York, New Jersey and North Carolina, free negroes were voters, and, in proportion to their numbers, had the same part in making the Constitution that the white people had.

Whenever legislatures move to defend life, the abortion lobby runs crying to the lawyers, in hopes of getting some judge to force their will on the public. Their lack of respect for democracy’s outcomes and legitimate ways to dispute them was shared by pro-slavery forces, who decided to break away from the Union after seeing Lincoln win the presidency without even appearing on any Southern ballots. Admittedly, pro-aborts haven’t gotten that desperate…yet.

It’s clear why allusions to the enslavement of black men and women outrage those who defend the slaughter of innocent children: because they can’t handle looking at history and seeing a mirror image stare back at them.