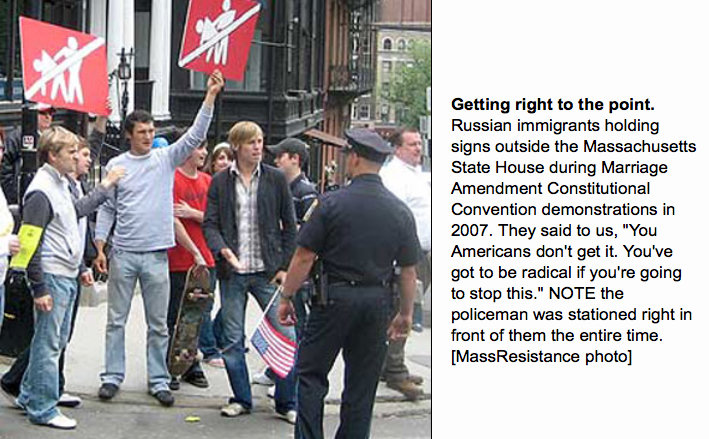 July 1, 2015 (massresistance.org) – On June 26, the US Supreme Court ruled that “gay marriage” is a constitutional right guaranteed under the Fourteenth Amendment. An enormous amount has been written, including by the dissenting Justices, clearly exposing it as fraudulent, unconstitutional, and illegitimate – no less than pure judicial political activism.

Probably most egregious, according to federal law Justices Ginsburg and Kagan should have recused themselves from this case because they had performed “gay marriages” and had voiced support for making it legal, and for LGBT rights in general. Thus the conduct of the case was a violation of the respondents’ right to an impartial hearing – implied in the Fourteenth Amendment’s “due process” clause.

But this judicial activism was the culmination of years of powerful unchecked political (and psychological) momentum.

Probably the biggest reason we’ve been losing this battle so spectacularly rests in the laps of our own movement. It pains us to say that in many ways the religious pro-family establishment is as treacherous and opportunist as the national Republican Party establishment.

For the past decade, the religious pro-family establishment has essentially made a deal with the devil on the LGBT issue. As they took on the “culture war battles” they desperately didn’t want to be labeled as haters, bigots, fringe elements, etc., by the liberal media and political class. In return they implicitly agreed not to demean homosexual (or transgender) behavior as being immoral, perverted, unnatural, destructive, unhealthy, or medically dangerous. Although they support traditional marriage, they purposefully didn’t oppose homosexual civil unions or domestic partnerships. And although they preached that “every child needs a mother and a father,” they didn’t oppose adoption by homosexual couples or describe the practice as harmful to children.

This large scale self-censorship was an incredible benefit to the LGBT movement over the years. It completely freed them from having to defend their most vulnerable and obvious weaknesses. Instead, they were able to pound away ad nauseam with their contrived “civil rights” arguments (which also were left unchallenged). At the same time, our side busied itself with unconvincing discussions of the nature of marriage, what’s “better” for children, religious freedom, and the like.

This terrible strategy also greatly hurt us in the LGBT “culture war” battle in society in general.  The refusal by our movement and its leaders to tell the truth allowed corporations, politicians (including the GOP), civic organizations, left-wing churches, and other institutions to cave in to the LGBT movement largely unimpeded. (Our favorite: Pro-family groups rebuked corporations by politely asking them to “Be neutral in the culture war,” instead of demanding “Don’t support perversion.”)

Once the radicals got this momentum going, is it any wonder the LGBT movement was able to sail through the federal courts? Our side’s legal arguments were often so lopsided that judges were almost left no choice but to rule for the homosexuals. Back in 2009, in the California Prop-8 trial, the out-homosexual federal judge actually rebuked the pro-family attorneys for presenting such an inept presentation of their case.

The US Supreme Court “gay marriage” case continued this pattern, as we reported back in May. And the result, shocking as it was, was really much the same as in the lower federal courts.

The other big problem

The other huge obstacle to pro-family success has been the cowardly exit of wealthy conservative donors from this battle. It became evident soon after the Proposition-8 victory in California, when homosexual activists viciously (and very publicly) attacked key individuals and businesses who had donated to the pro-family side. And the pro-family side did little to counter it. So it’s had the desired effect. Many wealthy conservative businessmen have admitted to us that they’re simply afraid to donate to groups in this fight.

As a result, it’s been overwhelmingly difficult for our side. Homosexual groups receive millions from pro-“gay” individuals, corporations, and the government. But front-line pro-family groups are always scrambling just to pay their bills. It’s not uncommon for pro-family groups to be at a 50-1 or even 100-1 funding disadvantage in crucial LGBT battles. When pleaded with for needed support, conservative businessmen simply shrug their shoulders.

What should we do?

It’s easy to conclude that the LGBT movement has now captured America and its grip is insurmountable.

Don't believe it. Any serious study of the history of political movements around the world over the last hundred years (both good and evil – viz. Lenin, Mao, Gandhi, Alinsky, Martin Luther King, the fall of the USSR under Reagan) reveals the massive weaknesses of the LGBT movement lurking just under the surface. In other words, given the right kind of opposition it could all come down. The more they talk about “being on the right side of history” the more it’s really covering up a house of cards.

Strategically, there are many things that need to be done make their movement collapse. We will be talking more about this in future posts.

But right now – as Pope John Paul II observed –  the two most important things that one must do are telling the truth and not being afraid. It may seem simplistic, but these alone are very powerful. No totalitarian movement can withstand it for very long.

That’s why the situation with Dr. Paul Church is so critical. As we reported recently, Dr. Church, a member of the Harvard Medical School faculty, has been fired from a major hospital in Boston because he insisted on telling the truth to other staff members about the medical dangers of homosexual behavior. He voiced opposition to the hospital’s aggressive promotion of LGBT activities. And he wouldn’t back down to threats and intimidation from the hospital administration to stop talking about it. (He even used the dreaded p-word — “perversion” — in his correspondence! And he quoted the Bible!)

Dr. Church did what almost no prominent pro-family leader has been willing to do. And he knowingly risked his job to do it. Everybody must do what Dr. Church is doing.

Another thing we all must do: Openly resist this Supreme Court ruling every chance we get, in ways big and small.

“In office, Lincoln gave effect to his position against judicial supremacy by consistently refusing to treat the Dred Scott decision as creating a rule of law binding on the executive branch. His administration issued passports and other documents to free blacks, thus treating them as citizens of the United States despite the Court’s denial of their status as citizens. He signed legislation that plainly placed restrictions on slavery in the western territories in defiance of [Chief Justice] Taney’s ruling.”

What would this mean in our daily lives?  Maybe it means complaining loudly if your child’s school plans to teach about “same-sex marriage” to your kids. Or insisting in a conversation that “gay marriage” is an unnatural fiction. Or objecting if your company pushes it in “diversity training.”

To sum up, in many ways this horrible ruling was the predictable result of our own movement’s cowardice and incompetence. Not surprisingly, the proponents are moving fast to seal it in our psyche as permanent. Already, we’re seeing articles in the mainstream media that the world has changed forever and the ignorant dissent will soon be washed away. But the world is a lot more resilient than they think. Their modern day “thousand year Reich” is as unreal as the previous one. It’s up to us to take it down.

This article was first published on Massresistance.org and is re-published with permission.