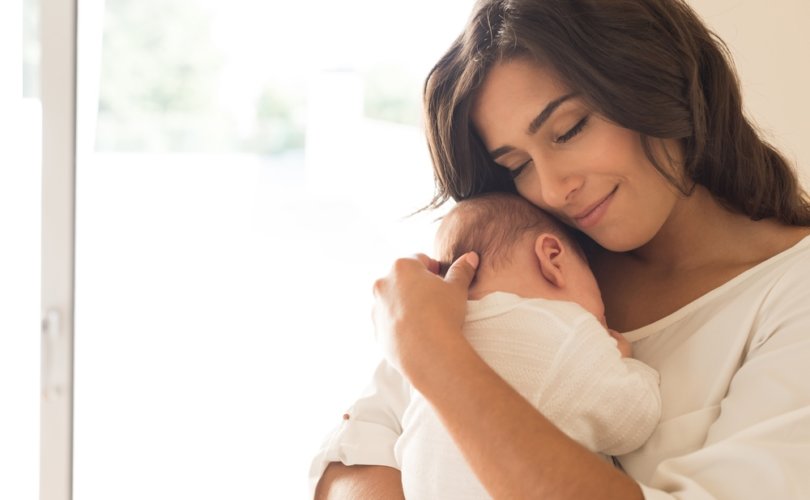 March 8, 2021 (Crisis Magazine) – That famous C.S. Lewis line (which is actually just a paraphrase of his original quote) comes to mind every time I see a headline about what the market rate value of a housewife should be. And while some on the right may argue there is a market rate value to be figured and that domestic work should be honored (i.e., compensated for and thereby ‘recognized’ as real work by the government), I am not convinced that is the best way to honor such work.

Since Senator Mitt Romney’s proposed child allowance was introduced, intra-conservative debate as of late has centered around the merits of good family policy and how to best help struggling families and incentivize marriage and a baby boom in an age of social and familial decline.

While the reason why my generation continues to put off marriage and children is a far more complex moral question and less of an economic one, perhaps it is time we mirror our economic policies to our aspired values and see if that would not prove to be more fruitful for the future.

One place to start would be getting our economy back to a place where one income is enough to raise a family, in the hope that we might once again value the life or ‘career’ (as Lewis calls it) that all other careers are meant to financially support.

Now, I am not against all women working. That is a very nuanced topic and not the focus of this article. However, in principle, I am against women having to work out of necessity since they already bear their own burden in the family equation, being the primary caregiver of children. Giving women a second responsibility and expectation on top of that? Hardly equal.

But to return to that economy would require a massive heart change in the culture, something far harder to accomplish than pushing public policy. Our current culture is no longer relational and defined by family life but is rather heavily task-oriented and defined by the productivity of our workforce. To put it another way, it’s highly focused on profession and less so on vocation, and this is to the detriment of both genders. Our post-industrial workforce (which changed family dynamics forever) was obviously designed for men in mind as primary providers (even while occupations have since opened to women), and it breeds careerism.

Don’t believe me? Consider what the highest priority and decision-making factor of an average college graduate is: what their profession is and where they can do it. Moving somewhere new for a job is considered normal and responsible. Moving somewhere for community, family, friends, love — less so.

It’s almost as if human relationships are thought to be secondary — mere accessories in one’s life rather than a priority or the highest good (apart from God). Think about how our culture prioritizes education and career pursuits but seldom does the same for marriage and children. Thus, older generations start to wonder why young people aren’t dating and having families anymore. What they fail to realize is that they, in part, created a culture that doesn’t honor and elevate relationships to their appropriate status.

A priest friend once told me that “pre-Cana” (or “marriage prep” for Catholics) is not something that you get around to after you’re engaged. It’s a process of preparation that needs to start at birth. Marriage is a vocation, not an afterthought. It needs a place of priority in the family and in the greater society as a whole.

But liberalism, on its never-ending quest for total egalitarianism, demands that women stay in the workforce like men (even though it goes against the desires of many). And their solution for what to do with the kids? Daycare, which when I was little, I unironically called the orphanage. To them, spending your time earning a wage is more valuable to society than making a home and raising your own children — which is nothing that can’t be sourced out to cheap labor! Like everything in this throwaway culture, they want you to know that you’re replaceable.

They publish thought pieces like Paid Childcare For Working Mothers? All It Took Was A World War, completely missing the point that the goal for most American couples in days past was never to have two full-time working parents. Rather, it was the luxury of the woman to have the ultimate career — no career. That’s why daycare programs went away when the men came back from World War II: Most Rosie the Riveters became Suzie Homemakers.

One would think the richest and most influential conservative think tank in Washington, D.C. would push back against this ideal of daycare as the answer and a continued insistence on a two-income household. Think again. In a tweet warning against how a federalized $15-an-hour minimum wage could increase childcare costs, the Heritage Foundation commented, “Such large increases in the cost of childcare could prevent many families from affording it. That could reduce employment by causing some parents — particularly within two parent families — to stay home with children instead of working.”

When modernists attempt to celebrate the work done at home that is so often overlooked, they make a mistake by placing a monetary value on this work, as if that would make the world appreciate it all the more. I mean, nothing says appreciation more than a taxed income, am I right?

According to one estimate, homemaking is valued at a whopping $160,000 a year! (Some guy friends cheekily commented, “Sign me up.”)

But what’s wrong with this approach is that it demeans the vocation of motherhood and caregiving by placing a price on work that is invaluable. But this shouldn’t come as a surprise since the culture doesn’t see it as invaluable. It looks at motherhood through a market lens. It’s seen as a common “job,” a series of tasks and chores to be compensated for. But we instinctively know our mothers are not simply drivers, babysitters, cooks, maids, psychologists, etc. They’re the heart of the home, a person — the central person in our lives.

What a mother does is out of love, and love cannot and should not be transactional or it ceases to be love. Love, by definition, does not count the cost, and cannot be farmed out to another for hire. It is a total gift of self to will the good of the other.

To make some economic adjustments in the short term that would aid the flourishing of the family is one thing. To change the heart of a nation and fundamentally reorient its priorities is another. This alteration would require an abandonment of hyper-individualism and an adoption of interdependence, seeing the family not as a collection of independent persons and wills, but of complimentary roles directed toward a common good. Somehow, I think we’re all just too tired for that fight — even though I believe it’s the one worth having.