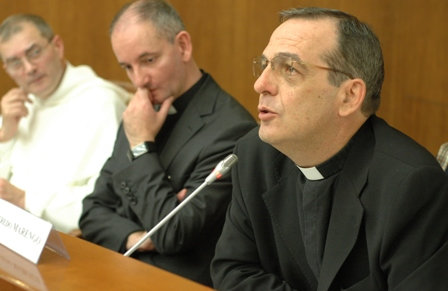 June 16, 2017 (Lepanto Foundation) — Monsignor Gilfredo Marengo, professor at John Paul II Pontifical Institute, will be the coordinator of the commission nominated by Pope Francis to “reinterpret” the encyclical Humanæ Vitæ by Pope Paul VI, in the light of Amoris laetitia, on the occasion of  the 50th anniversary of the former's promulgation, which falls next year. The initial rumors of the existence of this commission, still secret but reported by Vatican correspondent Marco Tosatti, were of a sound source.

We can confirm that there is a commission, made up of Monsignor Pierangelo Sequeri, Head of the John Paul II Pontifical Institute; Professor Philippe Chenaux, lecturer in Church History at the Lateran Pontifical University; and Monsignor Angel Maffeis, head of the Paul VI Institute in Brescia. The coordinator is Marengo, lecturer in Theological Anthropology at the John Paul II Institute and member of the Steering Committee of the review CVII-Centro Vaticano II Studi e ricerche.

The commission nominated by Pope Francis has the task of procuring from the Vatican Archives, the documentation related to the preparatory work on Humanæ Vitæ, which took place over a period of three years, during and after the Second Vatican Council. The first study group on the matter “of regulating births” was constituted by John XXIII in March 1963 and grew to 75 members under Paul VI.  In 1966, the “experts” delivered their conclusions to Pope Montini and suggested opening the doors to artificial contraception.

In April 1967, the document reserved for the commission – the one from which the “re-visitation of the encyclical” should start – appeared contemporarily in France in Le Monde, in the U.K. in The Tablet and in the U.S. in the National Catholic Reporter. Paul VI, however, after two years of wavering, published the encyclical Humanæ Vitæ on July 25 1968, wherein he affirmed the traditional position of the Church, which has always forbidden the artificial limitation of births. It was, as the philosopher Romano Amerio said, the most important act of his pontificate.

Humanæ Vitæ became the object of unprecedented contestation, not only from theologians and priests, but also from some episcopates, beginning with the Belgian, headed by the primate Cardinal Leo Suenens, who, at the Council, had exclaimed in vehement tones: “Let us follow the progress of science. I beseech you Brothers. Let us avoid a new Galilei trial. One is enough for the Church.” Cardinal Michele Pellegrino, Archbishop of Turin, defined the encyclical as “one of  the tragedies of  papal history.”

In 1969, nine Dutch bishops, among whom was Cardinal Alfrink, voted on the so-called Declaration of Independence, which invited the faithful to reject the teaching of Humanæ Vitæ. On the same occasion, the Dutch Pastoral Council with the abstention of bishops, took the side of the New Catechism, rejecting the corrections suggested by Rome and asking the Church to stay open to “new radical approaches” on moral issues not cited in the final motion but which emerged in the work of the Council: premarital relationships, homosexual unions, abortion and euthanasia. “In 1968 – Cardinal Francis J. Stafford recalls – something terrible happened in the Church. Within the priestly ministry, among friends, splits occurred everywhere, which would never ever again be repaired; those wounds continue to afflict the entire Church” (1968, l'anno della prova, in L'Osservatore Romano, 25th July 2008).

On the subject of contraception, Paul VI expressed himself in Humanæ Vitæ, in a manner which theologians judge as infallible and thus unmodifiable, not because the document in itself had the requisites of infallibility, but because it reaffirms a doctrine always proposed by the perennial Magisterium of the Church. The Jesuit theologians, Marcelino Zalba, John Ford and Gerald Kelly, the philosophers Arnaldo Xavier da Silveira and Germain Grisez, and many other authors explain how the doctrine of Humanæ Vitæ needs to be considered infallible, not in virtue of the act of its promulgation, but because it confirms the ordinary, universal Magisterium of Popes and the Bishops of the world.

Monsignor Marengo, the prelate Pope Francis has entrusted with the task of re-reading Humanæ Vitæ, belongs, on the other hand, to the category of prelates who are convinced they are able to reconcile the irreconcilable. In September 2015, commenting in Vatican Insider on the work of the Synod on the Family, suggested “abandoning  a conception of the doctrinal patrimony of the Church as a closed system, impermeable to questions and provocations of the here and now, in which the Christian community is called to justify its faith, through its proclamation and testimony.”

In a more recent article in the same newspaper (Vatican Insider, March 23, 2017) with the significant title, Humanæ Vitæ and Amoris laetitia, Monsignor Marengo asks if “the polemical game – the pill yes – the pill no, like today's — Communion to the divorced  yes – Communion to the divorced no — is only an appearance of discomfort and strain, [which is] much more descisive in the fabric of ecclesial life.” In fact, “every time the Christian community falls into error and proposes models of life derived from too abstract and artificially constructed theological ideals, it conceives its pastoral action as the schematic application of a doctrinal paradigm.” “A certain way of defending and acknowledging the teaching of Paul VI – he adds – was, probably one of the factors for which – he cites Pope Francis at this point – we have presented a too abstract theological ideal on marriage, almost artificially constructed, far from the concrete situation and the effective possibilities of families as they really are. This excessive idealization, above all when we have reawakened trust in grace, has not made marriage more attractive and desirable, but quite the opposite.”(Francis).

However, if the antithesis “the pill yes – the pill no – like today's “Communion to the divorced yes – Communion to the divorced no” is only a polemical game, the same principle could be applied to all of the great themes of the Faith and Morality: “abortion yes – abortion no”, but also “the Resurrection yes – the Resurrection no” “original sin yes – original sin no,” and so on. The very contraposition between truth and error and good and evil becomes at this point “a polemical game”.

It should be noted that Monsignor Marengo does not propose to read Amoris laetitia along the lines of the hermeneutic of continuity. He does not deny the existence of a contradiction between the two documents: He admits that Amoris laetitia authorizes what Humanæ Vitæ prohibits. But he retains that every theological and doctrinal antithesis should be relativized and superseded in a synthesis that is able to reconcile opposites. The true dichotomy is that between the abstract and the concrete, between truth and life. What counts, for Monsignor Marengo, is to immerse oneself in pastoral praxis, without bending to “too abstract and artificially constructed  theological ideals.”

It will be praxis and not doctrine that indicates the line of action. Behavior, in short, is born of behavior. And no behavior can be subject to abstract theological and moral valuations. “Models for life” do not exist, there is only the flow of life, which accepts everything, justifies everything, sanctifies everything. The principle of immanence, struck down by St. Pius X in the encyclical Pascendi (1907), has been re-proposed in an exemplary manner.

Will there be any priests or theologians faced with this program of the  “reinterpretation” of Humanæ Vitæ who have the courage to utter the word “heresy?”

Reprinted with permission from the Lepanto Foundation.