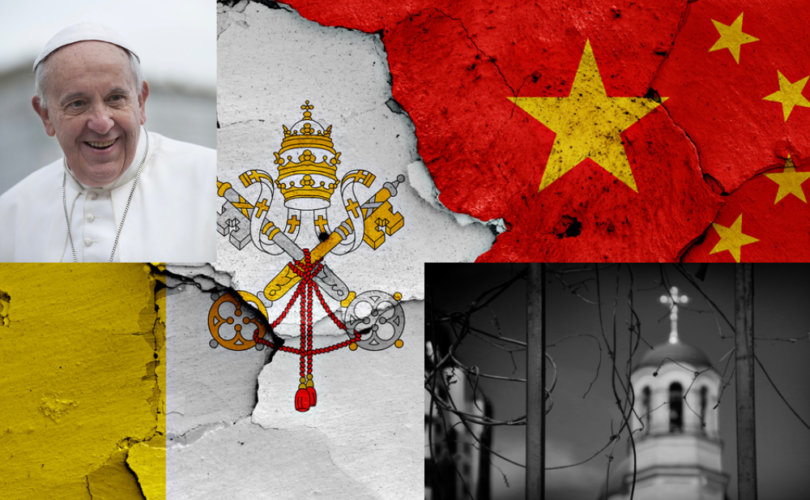 (LifeSiteNews) – While Pope Francis’s Vatican enjoys the televised spectacle of the 2022 Winter Olympics, which are reportedly “close to the Pope’s heart,” it seems that something that is not close to his heart is the Catholic Church in China, as Francis continues to turn a blind eye to the suffering caused through his secret deal with Communist China.

Monsignor Melchor Sanchez de Toca, the undersecretary of the Pontifical Council for Culture, recently told EWTN that the Olympic Games are “close to the Pope’s heart and, therefore, the heart of the Church.” This came after the Pope had issued two messages to the competitors at the Games, going so far as to highlight these Olympics as presenting “a unique experience of human fraternity and peace.”

Perhaps by “unique experience of fraternity and peace,” Pope Francis should have instead described the Games as a means to distract the world from the shocking betrayal he made of Catholics in that very country when he signed the 2018 deal with Beijing.

Allegedly, the Vatican-China deal recognizes the state-approved church and allows the Chinese Communist Party (CCP) to appoint bishops. The Pope apparently maintains a veto power although in practice it is the CCP who has control. It also allegedly allows for the removal of legitimate bishops to be replaced by CCP-approved bishops.

But in practice, the Bergoglian Vatican has waved the white flag to Beijing, abandoned faithful Chinese Catholics to state sanctions, persecutions, abductions and torture, and now has simply turned on the TV to watch the Olympics.

Yet while Pope Francis shamefully defended the deal as forming a “new chapter of the Catholic Church in China,” the bloody reality on the ground is far removed from words such as “dialogue,” or urging Chinese Catholics to be “good citizens.”

Persecution has increased thanks to Pope’s deal with Beijing

Writing to report the fifth arrest in two years of Bishop Peter Shao Zhumin, the Vatican-approved bishop of Wenzhou, AsiaNews recounted the state of affairs for Chines Catholics on the ground:

closed and sealed churches, the destroyed crosses, the domes razed to the ground, the demolished sanctuaries, the police enforced ban on minors under 18 years attending church or catechism …

The good bishop’s arrest are not random either: the CCP have taken him with “almost scientific” timing around important Catholic feasts, such as Christmas, Easter, the Assumption, and November, the month of prayer for the dead.

Summer 2021 also saw a number of clergy arrested by the CCP, with Bishop Joseph Zhang Weizhu of the Xinxiang Diocese abducted along with ten priests and ten seminarians in May when around 100 “Public Security agents” raided a disused factory which had been used by as a seminary for those who did not want to join the CCP-approved church. Their crime – not joining the state approved church, the “Patriotic Association” whose loyalty is ultimately to Xi Jinping.

One Fr. Joseph Liu, of the diocese of Mindong, was also detained by police in July and tortured for 10 hours, before “six policemen took him by the hand and forced him to sign” his allegiance to the CCP. That very day, Vatican News was full of praise for China, as Bishop Li Hui became the fifth bishop consecrated under the terms of the deal. But as far as the Vatican was concerned, Fr. Liu might not even have existed.

Another Chinese Catholic priest, not part of the CCP-approved church, told Bitter Winter that, “we do not see any positive result of the Vatican agreement. We pray for the Pope every day, but believe he has received false information about China. We will not join the Patriotic Association.”

Nor is it merely the courageous clergy who are subject to persecution. AsiaNews reported that members of the lay faithful were being penalized for their support of Bishop Shao. In March 2021, a 56-year-old Huang Ruixun had offered his private chapel in his own residence to the bishop to use. Bishop Shao offered Mass and “about twenty faithful” attended, resulting in Huang being served a fine of “200 thousand yuan,” or around $31,200. Huang was also charged with hosting the bishop “for illegal religious activities, also providing him with lunch, a rest room, etc.”

Christian symbols are also worthy of persecution, under the terms of Xi’s Communist government, with some town’s ordering Christian recipients of “social welfare” to “to remove crosses, religious symbols and images…and replace them with portraits of Chairman Mao and President Xi Jinping.”

Such is the glory of the “new chapter of the Catholic Church in China” of which Pope Francis is so proud – a church which is now marked by an era of persecution and necessary secrecy, which echo the Elizabethan times of Catholic persecution in England and Ireland more than the supposedly civilized world of the 21st century.

In fact, the persecution under the Vatican-China deal has increased to such levels, that in January 2020, an annual report by the U.S. Congressional-Executive Commission on China stated the persecution witnessed was “of an intensity not seen since the Cultural Revolution.”

Reggie Littlejohn, president of Women’s Rights Without Frontiers, presented a harrowing account of the consequences of the deal, telling EWTN in 2019 that it was used “to bludgeon the Church, decimating churches, decimating Marian shrines, detaining priests.”

Due to the Papal promotion of the Patriotic Association, in 2019 Cardinal Joseph Zen, the emeritus bishop of Hong Kong, even accused Francis of “encouraging a schism,” and styled the deal “an incredible betrayal.”

“The document contains something against our orthodoxy and they are encouraged to sign. You cannot cheat yourself. You cannot cheat the Communists. You are cheating the whole world. You are cheating the faithful. To sign the document is not to sign a declaration. When you sign, you accept to be a member of that church under the leadership of the communist party. So terrible, terrible,” he added.

And yet despite this, the Bergoglian Vatican continues its unholy triste with Xi’s China. So sycophantic and disturbing is this relationship that in early 2018, Archbishop Marcelo Sánchez Sorondo – Chancellor of the Vatican’s Pontifical Academies for Sciences and Social Sciences since 1998 – claimed that communist China was the “best [at] implementing the social doctrine of the Church.” No doubt, Sorondo was laying the necessary diplomatic ‘niceties’ before the “betrayal” deal was signed.

It’s a “betrayal of the real Church,” lamented Cardinal Joseph Zen in 2020 before revealing a startling detail: “It’s not an isolated episode. It’s already a long-standing policy of the Vatican not to offend the Chinese government.”

As China hands out financial rewards for reporting house-churches to the authorities, priests and bishops are arrested for loving Christ instead of Xi Jinping, and faithful Catholics are penalized and arrested for helping their devoted clergy, will the Vatican renew the “betrayal” deal once more this autumn?

While reporting has been widely silenced on the catastrophic effect which the deal has had on Chinese Catholics, the Bergoglian Vatican cannot claim ignorance of the consequences. The question remains – does it even care?