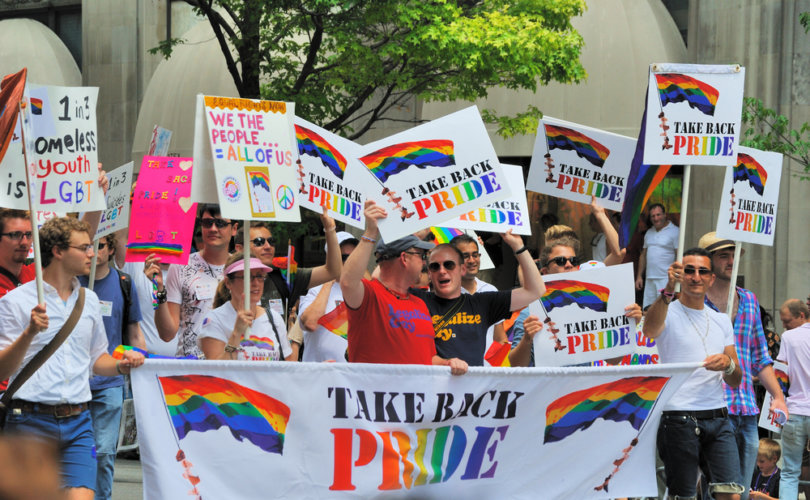 November 1, 2016 (HLI) — Contemporary culture is in a deep crisis regarding holy matrimony. Both the truth about the family and families themselves are being ripped a part by violent forces. Proponents of the Culture of Death know well the importance and centrality of the natural family; otherwise, why exhaust so much time, effort, and resources attacking it?

This doesn’t only weaken the family, it will weaken the nation. Indeed, throughout history, this has been a well known strategy for conquering opponents — attacking the most fundamental elements of language and culture. The renowned general, military strategist, and philosopher of ancient China, Sun Tzu (544-496 BC), laid out the strategy in The Art of War:

There is no art higher than to destroy your enemy without a fight by subverting anything of value in your enemy’s country.

Over time and with great diligence, promoters of sexual license, gender ideology, and the redefinition of marriage have radically changed the way we think of matrimony and family. Most no longer understand that basic truth that in its essence, marriage is one man and one woman in an indissoluble, exclusive, and fruitful union. Most people in our culture no longer understand the role of matrimony and family and are incapable of defending these sacred institutions, thus becoming easy prey to radical anti-marriage and family ideologies.

Of course we shouldn’t be surprised that marriage and family are at the crux of the battle.

The final battle between the Lord and the reign of Satan will be about marriage and the family. Don’t be afraid, she added, because anyone who works for the sanctity of marriage and the family will always be fought and opposed in every way, because this is the decisive issue. And then she concluded: however, Our Lady has already crushed its head. — Sister Lucia, Visionary of Fatima

It has been so for nearly a century. On October 13, 1917, while the three seers of Fatima were joined by tens of thousands who witnessed the Miracle of the Sun, Russia’s October Revolution was underway. Its leader, Vladimir Lenin, was open about his attack on the family, and as prophesied by the Virgin Mary, Russia’s errors spread throughout the world, their destruction accelerated in part by how they have found purchase here in the United States.

The current US presidential and congressional elections are but one example of how the war on these institutions continues. With poisonous eloquence, political candidates and pundits defend same-sex unions, perverted sex education programs, sex and reproductive rights — contraception and abortion — and gender role confusion. These modern day pipers play their melodious tunes, leading all who listen to cultural and societal demise.

The attack on the family would not have so much success, even among Christians, without the misrepresentation of the role of conscience. The catchphrase “Follow your conscience” is used to justify one’s ability to do almost anything one chooses or believes is good. This misunderstanding of freedom of conscience is an exceptionally clever way of ending all discussion on what is morally good from evil: “Who are you to tell me what I can or cannot do?”

Try telling a judge or jury that your conscience allowed you to steal from your neighbor or kill your boss because he wouldn’t give you a raise. Try convincing a police officer that you ran the red light because you were “following your conscience.” It sounds ridiculous because it is ridiculous!

The weapons of this battle on marriage and the family, and our ability to use our conscience to do good, are the tools of propaganda and illusion aimed at transforming the minds and hearts. They use television, radio, film, the internet, and music as their primary media to promote a radical and distorted worldview. They further their grasp through perverted sex education programs imposed upon our youth, beginning as early as grade school. I recently witnessed an example of this in Guatemala City. One of the speakers showed a video depicting girls ages 6 and 7 being taught how to place a condom on a phallus. The video also showed young adolescents how to masturbate and be open to experimentation with other boys and girls. Under the guise of “comprehensive sex education”, these programs desensitize our young and pervert the moral and religious values being taught by their parents.

HLI’s global leaders see this all over the world. Emil Hagamu and George Wirnkar, our regional directors in Africa, have seen such programs firsthand. On a recent trip to Africa, I saw a textbook being used in many African countries to teach sex education. It was filled with pornography and images of children experimenting with different types of sexual activities. It taught African children how to use condoms and promoted gender role confusion.

The US government’s war on matrimony and family is upheld in its foreign policy. These policies demand and assure that any funding is directly connected to population control and the promotion of sexual and reproductive rights — contraception, abortion, sterilization, sex education programs and legalization of same sex unions. Through USAID and the UN’s Population (Control) Fund (UNFPA), such programs and policies are implemented. This directly influences cultures and their understanding of matrimony and family. The US does not use weapons of mass destruction to carry out its battle plans, but the destruction and devastation is the same, and its affects are generational.

Our nation, founded on the rights to “life, liberty, and the pursuit of happiness” is itself in crisis. We are divided because we no longer uphold objective truth. In his brilliant book God or Nothing, Robert Cardinal Sarah sheds a different light — the light of faith – on these same realities.

Without God, man builds his hell on earth. Amusements and pleasures can become a true scourge for the soul when it sinks into pornography, drugs, violence, and all sorts of perversions. There is great sadness in claiming to want to indulge in limitless pleasures, whereas the most beautiful joy is to remain simply with God, allowing him to clothe us in light and purity.

Our faith and resolve to bring about a cultural transformation is being tested.

What is our response to this war? Return to the Creator’s plan. Matrimony and family are God’s design, and as divine institutions they are not open to renegotiation or revision — there are no substitutions. Fundamentally, our global cultures and societies need a moral counter-revolution to replace the Culture of Death.

This is now up to us. Be Not Afraid!