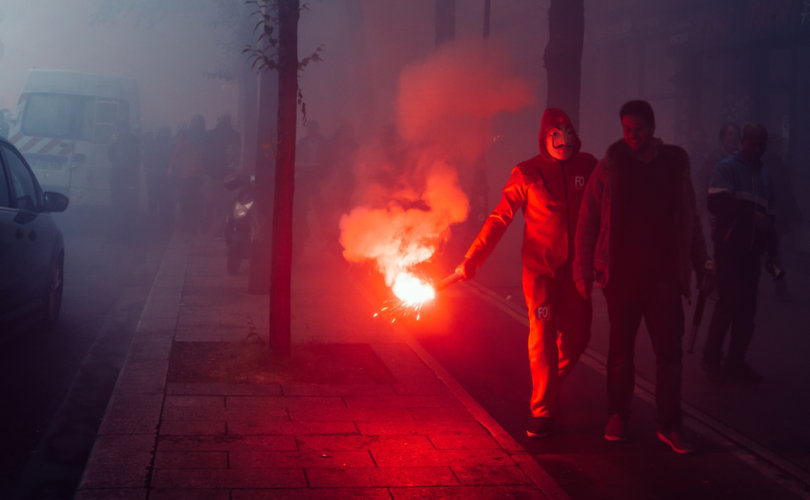 August 3, 2018 (American Thinker) – Progressives continue to astonish normal people with their complete incomprehension of normals (as Kurt Schlichter calls them) as human beings. Perhaps that's because they don't see us as human beings. They call us unsavory names – deplorables, bitter clingers, toothless, plus every dirty word they can think of. They throw nasty, biological things. They spit on people. They shove people, break windows, start fights, and go out of their way to ensure that everybody has a bad day.

Today's normal was a fifties liberal and, in many cases, a sixties liberal. In those days, you could be a conservative Democrat or a liberal Republican, and it raised no eyebrows. Today's prog, or extremist lefty, thinks all normals are extras from the movie Deliverance. Yet most of the time we dress about as they do, take the same public transportation, shop in the same supermarkets, and live in the same neighborhoods. If we really were toothless and illiterate, it would immediately stand out. It doesn't.

In the almost 70 years since 1950, normals haven't changed much. We still believe in God, pay taxes, get up and go to work, and keep to ourselves. We're raising families, after all, and that matters more than anything else. Unlike the prog caricature of us, we're responsible people. When we gather in large numbers, you almost can't tell we were ever there because we clean up behind ourselves. We speak quietly and respectfully, treat our women like ladies, and control our kids. Nobody fears normals because nobody has any reason to.

This contrasts starkly with progs, who gather in large numbers to riot, scream obscenities, carry signs, and trash the place. They get up in others' faces and scream and rage as if out of control, sometimes putting a normal person in fear for his life. All this is intended to communicate public unhappiness over this issue or that, but all it really puts across is that a bunch of wilding lunatics are loose again.

Liberals, similar to but reputedly more reasonable than progs, always notice the single MAGA hat in a crowd but never the destructive prog behavior raging all around them. And it's liberals who write the columns and tweets next day, dripping venom about the hateful normals. Yet any objective, disinterested observer would notice that it's progressives who regularly run out of control in angry, violent spasms of incivility and ugliness.

This isn't “culture war.” Culture has nothing to do with it. It's war on normality by Brownshirts, incited or paid for by the likes of George Soros and Tom Steyer. It has now graduated from street-fighting to trying to take down the U.S. government.

I will never understand these people's hatred of America. They are unreachable by reason. It seems clear that they are trying to provoke a heavy, violent reaction from us so they can then haul out the artillery. They missed their big chance with Barama in the saddle but had been biding their time right along. They'll just continue that until their next big chance. They need to be able to declare martial law.