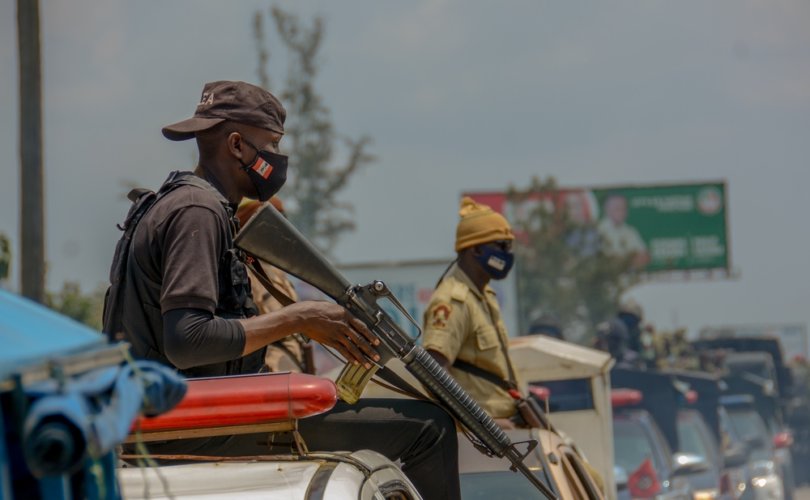 Nigerian security operatives during a military operation, ahead of the Governorship election, in Benin City, Edo, Nigeria, on September 17, 2020 shutterstock.com

LAGOS, Nigeria (LifeSiteNews) – Nigeria continues to be one of the most dangerous places on earth to be a Christian, but one wouldn’t get that impression if Western levels of interest are anything to go by.

An average of 17 Christians are murdered by jihadists every day in Nigeria, which will amount to over 6,000 deaths this year alone. More Christians were murdered there in 2020 than in any other country.

It’s difficult to ascertain what percentage are killed as a result of attacks by Boko Haram, Islamic State of West Africa Province (ISWAP), or the equally ruthless Fulani Muslims who roam vast swathes of the country as herdsmen.

Regardless, the violence has only gotten worse in recent years, not least because of their Muslim president’s seeming indifference to the plight of the Christian population, lambasted as his military is for their consistent failure to protect innocent Christian villagers from the jihadists.

President Muhammadu Buhari, who was elected in 2015, is himself part of the Fulani tribe responsible for tens of thousands of deaths during his reign. Buhari, however, has had little to worry about in terms of global repercussions for the ongoing bloodshed.

Successive U.S. presidents, whilst happy to decry terrorism in the Middle East, continue to appear unmoved by the barbarous deeds of ISWAP, Boko Haram, or the Fulani Islamists.

Perhaps they are unaware given the media’s scant coverage of the massacres that occur each week.

How many news junkies heard about the beheading of an entire bridal party in Borno state last Christmas by Boko Haram, or the killing of 11 other Christians on the same day, December 26, in revenge for the killing of senior ISIS terrorists in Syria?

Thousands of innocent believers have died since. The fate of 66 Christians abducted from their church in Kaduna state, northern Nigeria on 31 October still hangs in the balance, with two shot dead by their captors and many more injured. But these stories have ceased to cause even a ripple in our mainstream media outlets.

Perhaps Nigeria reached the zenith of international coverage in 2014 with the jihadist kidnapping of over 270 Chibok school girls, but it hasn’t taken long for the west African country to return to the periphery of the western imagination.

Contrast that with the U.S. bombardment of ISIS for over five years in Syria and Iraq, where the region’s stability was of utmost concern to presidents Obama and Trump.

News of ISIS massacres against Christians, Yazidis and moderate Muslims was considered more newsworthy among media chiefs than anything similar happening then or now in Nigeria.

A progressive commentator might at this point claim racism has a part to play in the West’s indifference to Nigerian bloodshed, but for this writer the real answer as to why there is no urgency to stop the persecution of Christians in west Africa is because the U.S. and other western powers lack a vested (financial) interest in taking action, unlike in the Middle East.

The great petrodollar agreement of 1974 between the United States and Saudi Arabia has established a seemingly unbreakable alliance between successive U.S. administrations and the Wahabi House of Saud, despite their profoundly different worldviews.

The move ensured oil producer nations use of the U.S. dollar as their currency of exchange, whilst Saudi Arabia’s petrodollars went on to purchase U.S. Treasuries as part of the agreement, thus funding substantial spending for years after.

The arrangement also saw years of inflation and oil embargoes suddenly solved in the U.S., with another ally created, besides Israel, in the Middle East.

It may or may not be a coincidence that dictators like Saddam Hussein and Muammar Gaddafi were toppled when they threatened the use of the petrodollar among oil producing nations, with the Iraqi leader switching to the Euro in 2000, and the U.S.-backed replacement administration quickly returning Iraq to the petrodollar.

Gaddafi was not given the time by NATO to launch his much-vaunted gold-dinar currency for Africa.

Whether or not this was the primary reason for their respective ousting from power is uncertain, but the U.S. knows that the flow of oil and its exchange in dollars is a vital ingredient in its status as an economic superpower, thus providing more motivation to eradicate groups like ISIS that were destabilizing the region, taking oil fields and getting worryingly close to Baghdad.

Perhaps the U.S. might increase its interest in Nigerian Christians if President Buhari were to move away from the petrodollar.

The Archbishop of Kaduna has previously described Christians as being “under siege” in their own country, whilst the president of the Catholic Bishops’ Conference of Nigeria, Archbishop Augustine Obiora Akubeze of the Archdiocese of Benin, last year pleaded with people across the world to “make known the atrocities.”

The archbishop told reporters in January 2020 that the Nigerian government “may feel pressure and act” if western governments and media “make known the atrocities” being perpetrated against Christians.

“Our hope is that the nations of the European Union and the United States will feel a moral obligation to protect the lives of Christians and all Nigerians who are constantly attacked and killed by Boko Haram and the Fulani herdsmen.”

The archbishop, whose words appear to have fallen on deaf ears, also lamented the under-representation of Christians in the Buhari administration, insisting the president shouldn’t be “shocked” by the violence.

“95 percent of the government representatives are Muslims, in a country where there are about 50 percent Christians and the ones who should ensure our safety belongs to a sect of a religion, to a single ethnic group, in a multi-religious, multi-ethnic nation.”

“So Buhari is shocked by the killing of Lawan Andima?” the bishop asked after the pastor’s murder. “Many Nigerians wonder whether the president lives in a parallel universe. How can he be surprised after some of us have attended numerous mass burials of Christians killed by Boko Haram?”

“The lack of significant prosecutions against them (Fulani Islamists) further fuels the belief that they enjoy the support of the federal government,” the archbishop concluded.

Christians in the west must make the ongoing Islamist massacres a political and presidential issue, lest we forget that the Body of Christ continues to suffer in some of cruelest ways imaginable.