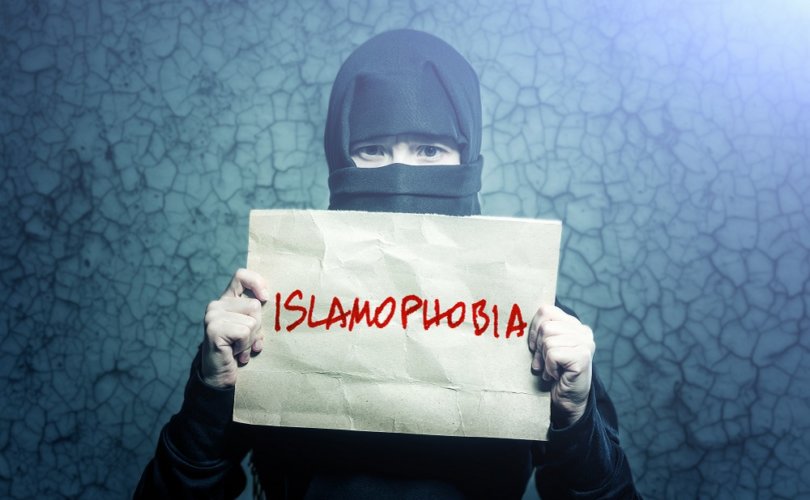 June 20, 2019 (American Thinker) — Jihadists are masters at putting people on the defensive, and the term “Islamophobia” is a potent weapon constantly used by them.  Essentially, it shuts down any comment about Islam that is not favorable.  Initially, it is the back door to censorship.  Ultimately, it is to establish the Islamic takeover of the West because it obfuscates factual evidence of many of the heinous aspects of sharia law and societies under Islamic rule.

It was “[a]t the end of the 1970s, [when] Iranian fundamentalists invented the term 'Islamophobia[.]'  The aim of this word was to declare Islam inviolate.”  The term, which is “worthy of totalitarian propaganda, is deliberately unspecific about whether it refers to a religion, a belief system or its faithful adherents around the world.”

The lack of specific definition leaves the door wide open to multiple interpretations, all to the benefit of the jihadists who would use the word to suit their vile purposes.  Thus, “the term 'Islamophobia' denies the reality of an Islamic offensive in Europe all the better to justify it [and] it attacks secularism by equating it with fundamentalism.”  It “silences all those Muslims who question the Koran, who demand equality of the sexes, who claim the right to renounce religion, and who want to practice their faith freely[.]”

Repeatedly, freedom-lovers have demonstrated how the term “Islamophobia” has served its purpose spectacularly well.  It allows Islamic apologists to “silence any criticism of Islam.”  The term has infiltrated Middle East and Islamic studies, and anyone who would monitor mosques for threats to the public order will be denounced.  Consequently “child marriages, forced marriages, female seclusion, honor killings, gang rapes of infidel women, or the enslavement and sale of females for sex slavery” cannot be publicized for fear of being accused of racism.

Are these irrational fears?  In fact, “Islamists use diversity politics and ecumenical dreams to move the holy struggle forward.  Invoking Islamophobia, they seek to ruin any critics.  With the enthusiastic support of America's multiculturalists and cultural left, they are succeeding.”

If the following terrify you, then you are practicing Islamophobia:

The term “Islamophobia” has become common parlance despite the fact that Christophobia is rampant in the world and Judeophobia dates back to the ancient world.  But these latter terms are not meant to suppress free speech, whereas that is precisely what Islamophobia is meant to do.  Christianity is the most persecuted religion in the world today, and genocide of Christians is on the rise, though one would barely read about this in most of the mainstream media.

In 2015, Jonathan S. Tobin documented how Islamophobia fears hampered the war against ISIS.  The word created a national security risk because of the purging of relevant and factual training directly related to Islamic terror.  It is why in 2013, Berkeley professors claimed that Islamophobia was a greater threat than Islamic terrorism.  Moreover, the campaign to counter terrorist propaganda on university campuses is derided as Islamophobic.  Hurling an accusation of Islamophobia is why no one can be horrified when a Muslim imam claims that women who don't wear hijabs are asking to be raped.

In fact, FBI hate crime statistics show that claims about Islamophobia are false, yet such assertions are repeatedly whipped out.

In 2005, Daniel Pipes gave an overview of how the term was coined in 1996 by a self-proclaimed Commission on British Muslims and Islamophobia.

The word literally means 'undue fear of Islam' but it is used to mean 'prejudice against Muslims[.] …

The term presents several problems, however. What exactly constitutes an 'undue fear of Islam' when Muslims acting in the name of Islam today make up the premier source of worldwide aggression, both verbal and physical, versus non-Muslims and Muslims alike? What, one wonders, is the proper amount of fear? …

[P]romoters of the 'Islamophobia' concept habitually exaggerate the problem:

More recently, Soeren Kern describes how the deliberate manipulation of the definition of this term is actually establishing a back-door blasphemy law.  In fact, “[t]he proposed definition has been opposed by many Britons, including British Muslims, who warn that it would effectively shield Islam from scrutiny and valid criticism.”  Furthermore, “[s]enior British police officials have cautioned that the proposed definition of Islamophobia could cause confusion among police officers and hamper the fight against Islamic terrorism.”

From a legal standpoint, “no one would be sure which forms of words could land them in court.  It is precisely such uncertainty that makes the difference between a police state and a free society.”

In essence, “Britain is fatally infected by Islam.”  Bill Warner says of Islamophobia, “It is whatever the Muslims say it is.”

Islamophobia is an ideological fabrication.  It is continually used as a thoughtcrime to create a totalitarian future.  As Andrew C. McCarthy has stated, “it is a neologism coined by the Muslim Brotherhood, which is as practiced in the art of deception as any organization on Earth.”

It is well overdue to stop catering and bowing to those who would invoke the term.  We should all be Islamophobes or Naziphobes or Communistphobes, given the evil they perpetuate.