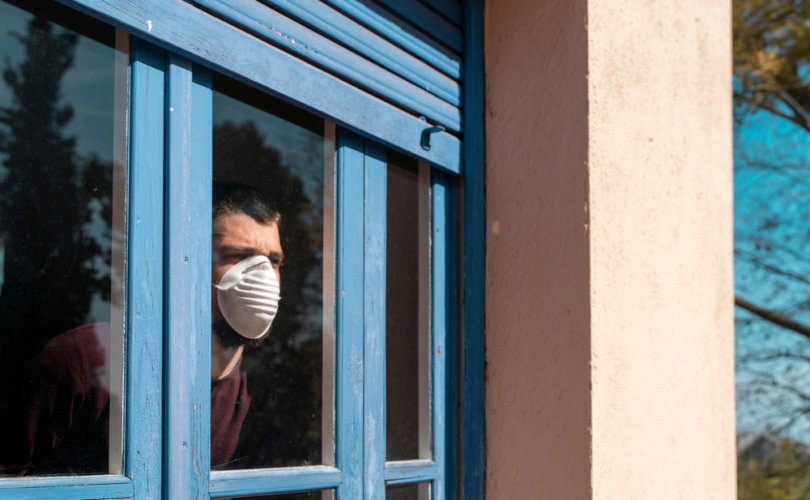 (LifeSiteNews) — Regarding asymptomatic transmission of COVID-19, we have no documented proof, no documented evidence of this occurring in any appreciable manner.

I refer to trustworthy evidence based on rigorous analysis. Spread of any pathogen will occur more surely when people are sick with symptoms, especially if the symptoms function to expel the pathogen into the surrounding air. Having no symptoms or very mild symptoms reduces risk of spread, and when there are no symptoms, spread is basically removed. This is the same for SARS-CoV-2, that is, COVID-19.

A recent BMJ publication concludes that asymptomatic persons and transmission are rarely the drivers they were thought to be. This is basic immunology; it should have come as no surprise to anyone and should not have been changed for SARS-CoV-2 (COVID-19). Nevertheless, the threat of asymptomatic spread was used as a key impetus for lockdowns.

We had illogical, irrational, hysterical, and absurd COVID lockdown lunatic policymakers daily driving populations into fear and sheer panic. Yet there was no evidence. They gave us no data. Fauci gave us no evidence. I say emphatically that there is no evidence of asymptomatic spread. I also recognize that I must be careful not to claim ‘zero’ as the evidence changes daily and rapidly, and absence of documented evidence is also not a reason. I say instead statistical zero risk or chance. It may have just not been studied yet or documented optimally. But I am confident enough, based on the existing literature, to also agree that ‘it is a dangerous assumption to believe that there is persuasive, scientific evidence of asymptomatic transmission’. To date there is none.

The tragedy is that the basis for the societal lockdowns was the idea that 40% to 50% of persons infected with SARS-CoV-2 could potentially spread it due to being asymptomatic. “But fears that the virus may be spread to a significant degree by asymptomatic carriers soon led government leaders to issue broad and lengthy stay-at-home orders and mask mandates out of concerns that anyone could be a silent spreader,” wrote Jeffery A. Tucker. However, evidence in support of common asymptomatic spread remains largely non-existent and, I argue, overstated and potentially made with no basis. We were, in effect, deceived, and the deception had devastating societal consequences. Many people, including children, committed suicide due to the lockdowns and school closures.

In a study of  nearly 2 million children followed in school in Sweden, it was reported that, with no mask mandates, there were zero deaths from Covid and only a few instances of transmission and minimal hospitalization.

In the United Kingdom, the ‘Scientific Advisory Group for Emergencies’ recommended that “Prioritizing rapid testing of symptomatic people is likely to have a greater impact on identifying positive cases and reducing transmission than frequent testing of asymptomatic people in an outbreak area.”

AIER’s Jeffery A. Tucker responded this way: “The conclusion is not that asymptomatic spread is rare or that the science is uncertain. The study revealed something that hardly ever happens in these kinds of studies. There was not one documented case. Forget rare. Forget even Fauci’s previous suggestion that asymptomatic transmission exists but not does drive the spread. Replace all that with: never. At least not in this study for 10,000,000.” Michael Haynes of LifeSiteNews reported similarly.

A study on infectivity of asymptomatic SARS-CoV-2 carriers was carried out by Goa at al. Researchers looked at the 455 contacts who were exposed to the asymptomatic COVID-19 virus carrier. They were divided into three groups: 35 patients, 196 family members, and 224 hospital staff. “No severe acute respiratory syndrome coronavirus 2 (SARS-CoV-2) infections was detected in 455 contacts by nucleic acid test,” they reported.

Meanwhile, the World Health Organization (WHO) also stated that asymptomatic spread/transmission of COVID-19 is rare. Again, while a rare optimal accurate statement by WHO, it still did not put to bed the erroneous concept. This issue of asymptomatic spread remains one of the key issues used to force vaccination in children. The science, however, remains contrary to this proposed policy mandate. As an update that came 18 months or so too late, on June 29th 2021 WHO recommended no testing of asymptomatic persons. This happened after trillions of dollars had been sucked out of economies and many lives lost due to lost jobs and the closures of societies and schools. Many people killed themselves because of the unscientific and illogical testing policy of asymptomatic persons.

My conclusion is that we were greatly misled to drive fear and panic, so that populations would easily comply with lockdowns. The misleading concepts of asymptomatic spread, recurrent infection, and equality of risk regardless of age-risk stratified baseline risk were all used to drive compliant masking and lockdowns. These concepts were all promoted with no evidence and all worked together to devastate societies. The statements on asymptomatic spread propagated by the U.S. COVID Task Forces and their lockdown lunatic advisors were duplicitous and based neither on any evidence nor science. All they accomplished was devastating damage to societies, economies, and the lives of citizens. Many could not hold on and killed themselves.