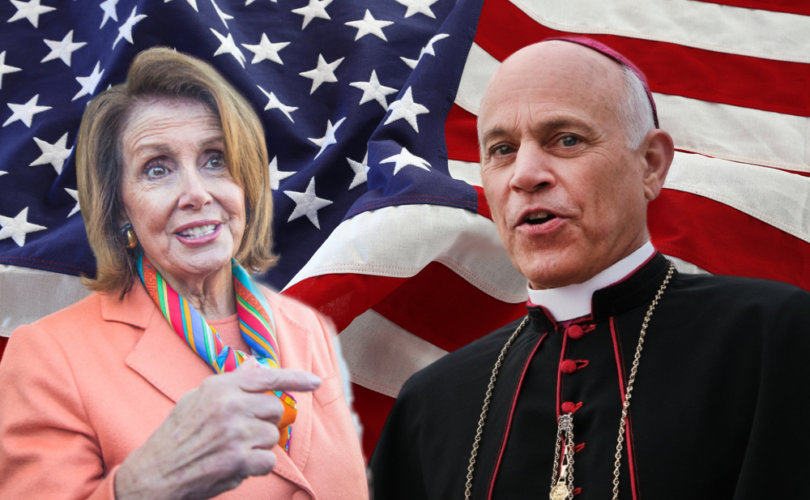 (LifeSiteNews) – It was quite a surprise to read about San Francisco Archbishop Salvatore Cordileone barring Nancy Pelosi from Holy Communion over her fanatical support for procured abortion.

Pro-life advocates are long accustomed to ecclesiastical waffling on the issue. All too often, Church officials have employed the deplorable tactic of endless dialogue, accompaniment, and listening with obstinate politicians hardened in their support for abortion. Years have passed while the slaughter of innocents continued unabated.

When the archbishop’s letter was made public, the faithful were treated to a rare display of purposeful definition. It was a condemnation. That is to say, an act declaring someone to be reprehensible, wrong, or evil without reservation. It is an affirmation that right and wrong exist and there are consequences. In an age of moral relativism, the act was tantamount to a political earthquake.

It felt refreshing to see the Church acting as it should and not beating around the bush. It was a breath of fresh air to see other bishops supporting the San Francisco archbishop or even extending the ban. Santa Rosa bishop, Most Rev. Robert Vasa, in whose diocese Mrs. Pelosi is reported to have a summer home, said the ban applies in his jurisdiction as well: “The new Canon makes it clear that providing sacraments to someone prohibited from receiving them [has] its own possible penalties.”

The surprise announcement was as if some dark spell was finally broken. For too long, evil has advanced because Church officials have adopted the Father-Martinesque farce of “building bridges” with sin, which all Catholics must hate (as distinguished from sinners, whom Catholics should love and help bring back to faithfulness).

The archbishop wrote, “After numerous attempts to speak with Speaker Pelosi to help her understand the grave evil she is perpetrating, the scandal she is causing, and the danger to her own soul she is risking, I have determined that she is not to be admitted to Holy Communion.”

The archbishop broke other progressive rules when he mentioned a notion of sin, even “grave” sin and the possible damnation of her soul. He recognized scandal and insinuated the need to be worthy to receive Holy Communion. These are the long-forgotten, “politically incorrect,” pastoral, and effective disciplinary measures that faithful Catholics have asked for in prayer for decades.

The Speaker of the House merits the rebuke. She not only supports procured abortion, but she has put herself at the forefront of the battle, supporting every pro-abortion initiative. She has muddled the doctrinal waters by saying she finds no contradiction in this horrific stance and the Catholic faith. She has been given every opportunity to recant. Nevertheless, she continues to act publicly contrary to Church teaching.

“The very idea that they would be telling women the size, timing or whatever of their family, the personal nature of this is so appalling, and I say that as a devout Catholic,” she recently told the Seattle Times.

Thus, when someone takes a stand as the archbishop did, it is cause for gratitude and public praise.

It is excellent that someone speaks out. However, it is also cause for reflection. Why did it take so long?

The pro-life movement has waited for more pronouncements like this one for fifty years. Plenty of Church officials will condemn abortion as an abstract principle. However, few will swing their shepherd’s staff, citing the names and publicly sanctioning those Catholic politicians and judges who shamelessly promote the slaughter of millions of Americans. How many millions of innocent lives would have been saved if Church officials had only shown moral courage and punished abortion promoters earlier!

A much more serious consideration involves the love of God. Many sacrilegious communions might have been avoided had these individuals been barred from receiving the Blessed Sacrament. Catholics need to consider this grave offense to God and its consequences for the nation. God cannot bless a nation that constantly offends Him in this manner.

There is yet another consideration. Speaker Pelosi is far from being the only Catholic government official promoting procured abortion. Thousands of Catholic public figures shamelessly defend this slaughter of innocents while claiming to be, like Pelosi, “devout Catholics.”

These people also need to be sanctioned. They have been warned for half a century. They must be added to the list. For too long, Church officials have been derelict in their duty, allowed this outrageous scandal to continue, and refused to defend the innocent unborn effectively.

Finally, this same Church discipline must be brought to bear on the nation’s highest government authority, in the person of President Joe Biden. He is the most visible Catholic figure and the most ardent and radical promoter of abortion in public office. He spares no effort to enact laws and provide funding for this nefarious cause, all the while claiming to be a faithful Catholic.

Scandalous complicity of the Catholic left

All these considerations point to the grave crisis inside the Church. None of this apocalyptic tragedy would be possible if not for the complicity and scandalous behavior of leftist bishops and priests. They support the President, Speaker Pelosi, and so many others by giving them Holy Communion despite the public scandal that it causes. Wilton Cardinal Gregory, archbishop of Washington, D.C., has even gone on public record announcing he will not deny Holy Communion to President Biden.

The Catholic left has long weaponized the Blessed Sacrament by knowingly giving Holy Communion to such individuals, realizing the political advantage accrued by the erring government officials who want to appear Catholic. The Church officials who go along with the scandal are its accomplices, aiding and abetting the offense against God and the harm done to the faithful.

Nancy Pelosi’s condemnation is a good beginning and worthy of praise. Much more needs to be done (and very soon), lest it be too little, too late.

1
Jewish groups decry end of Roe and call abortion restrictions a violation of their religious freedom
2
Police arrest Freedom Convoy leader Tamara Lich yet again
3
These pro-abortion moms illustrate the horrors of the culture of death
4
New Mexico promises to be safe haven for out-of-state abortionists
5
Democrats aren’t just coming after Trump, but also all his ‘allies and supporters’
Subscribe to Daily Headlines »