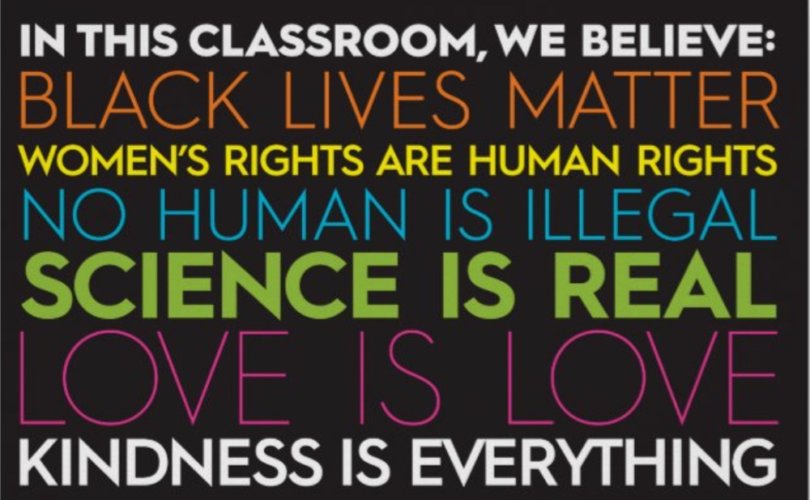 (LifeSiteNews) – “Modern society is in the middle of formulating an anti-Christian creed, and if one opposes it, one is being punished by society with excommunication.”

A creed is a brief summary of the religious beliefs of a certain group. The term comes from the Latin word credo, which literally means “I believe.” As far as I can tell, it probably originated in the Catholic Church, which has been saying the Nicene Creed and Apostle’s Creed, “I believe in God the Father…,” every day since at least the year 325 AD.

In my middle school, a new creed is now hanging above the doors of our gymnasium. But this time, instead of using the first-person singular “I,” the creed takes on a more totalitarian tone with the plural “We believe,” as if everyone who enters into the gym must believe the same thing. Here’s some of what the creed says:

“In this classroom, we believe Black Lives Matter, women’s rights are human rights, no human is illegal, science is real, water is life, in religious freedom, love is love, kindness is everything.”

While I’m sure the intention is good, the fact remains that the poster constitutes a creed, “a formal statement of religious belief; a confession of faith.” Perhaps this is the new creed and new religion that Pope Benedict was talking about in the quote above. At the risk of being excommunicated (or cancelled in the new religion) by my fellow teachers and administrators, I am now opposing it.

Why am I opposed to this creed? It’s not what the creed says. It’s largely what it doesn’t say, the oversimplifications that make this creed so offensive. The creed says just enough to mislead people and to make it seem like anyone who opposes its banal platitudes is either racist, homophobic, unscientific, unkind, or all of these. In fact, it is possible to disagree with this creed and be NONE of these.

For example, by saying “science is real,” it is implied that there are people (namely Christians and conservatives) who do not believe in science? Catholic Christians invented the scientific method, founded the field of genetics and came up with the Big Bang Theory, to name a few.

By saying “No human is illegal,” it is implied that a nation should have open borders. Naturally, humans are not illegal, but humans do illegal things.

By saying “Black lives matter,” it is implied that the BLM organization, whose founders are trained Marxists and whose stated goal is to bring about the end of the nuclear family, is untouchable and sacred. One should be able to agree that black lives matter without agreeing with Black Lives Matter.

By saying kindness is everything, it is implied that one must be kind under all circumstances and that in the event kindness is at odds with truth, one must default to kindness at the expense of truth. Truth hurts. Kindness is NOT everything. In fact, it is only one of the fruits of the Holy Spirit: charity (or love), joy, peace, patience, benignity (or kindness), goodness, longanimity (or long-suffering), mildness (or gentleness), faith, modesty, continency (or self-control), and chastity.

I do hope that the creed will come down, but if not, perhaps it’s time for me to hang up the Apostles’ Creed outside my classroom. That may be the better compromise. If the acolytes of the new religion can be so vocal and open about their faith, why can’t the followers of Christ?