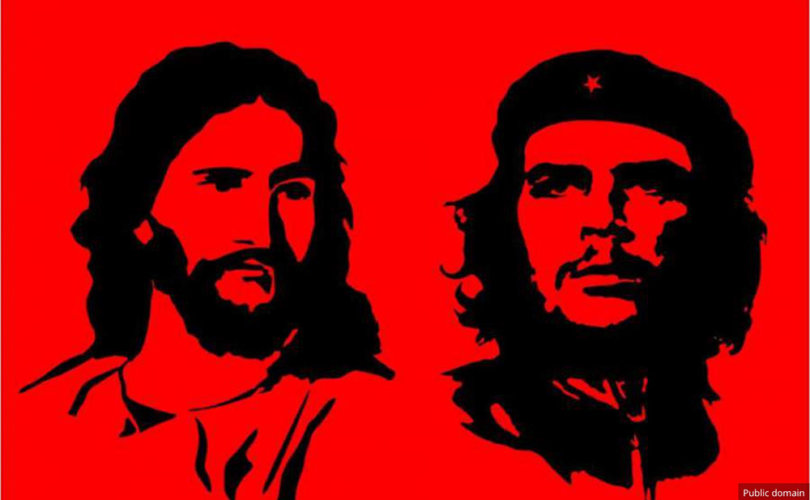 March 3, 2017 (Stream.org) – Imagine if your teenage son’s pastor had told him to apply “If your right hand causes you to sin, cut it off,” by applying a buzzsaw to his own right wrist. You’d yank your son out of that group and start making some phone calls.

That same sense of alarm and horror is what we should feel when we learn that influential Christians have interpreted our faith in some deeply misguided way which will do grave harm to them and others.

A Cabal of Catholic Leftists

Cardinal Peter Turkson and twenty-four American Catholic bishops have recently endorsed a political program that is dangerous, unbiblical, un-Catholic and uncharitable. In fact it is soaked in ideological rage, and explicitly aligns itself with the anti-Trump movements to “disrupt” the president’s enforcement of U.S. law. At least one of the bishops present, Robert McElroy of San Diego, has promised that the church he controls will actively help flout U.S. immigration laws.

This program was laid out at the First U.S. Regional Meeting of Popular Movements, which happened two weeks ago, and summed up in a manifesto called “Message from Modesto.” That “Meeting” included not just the cardinal and the bishops, but staff from the Vatican department for the Promotion of Integral Human Development and the Catholic Campaign for Human Development [CCHD].

The CCHD is the organization that radical Saul Alinsky personally helped left-wing Catholics to design, as the exposé A Wolf in Sheep’s Clothing documents. The Chicago branch of the CCHD, with the approval of then Cardinal Joseph Bernardin, cut the check that sent the young Barack Obama to his first Saul Alinsky “community organizing” school.

Another group that took part in the “Meeting”  was PICO, the Latin American far-left organization that used George Soros’ money  to spin Pope Francis’ 2015 U.S. visit as a boost to Democrats in the 2016 election.

This statement wasn’t affiliated with the U.S. bishops conference; it seems to be a trial balloon floated by left wing members of that conference, who hope to get it adopted down the line by the whole bishops’ group. If that happened, it would entirely discredit the Catholic church’s political witness in America.

We Want Total Equality, Open Borders, and a Pony

The manifesto which the 24 bishops endorsed calls for policies that would put it at the far left of the Democratic Party. For instance, it claims that

The authors say nothing about freedom or private property rights. So apparently an “equal claim” means “a claim to equal” education, health care, etc. If every person on earth deserves the same level of all these scarce goods, it’s the job of the government and the United Nations to equalize the wealth. In domestic terms, that means Catholic support for Obamacare, the further leveling down of education, a much higher minimum wage and more aggressive federal colonization of middle class neighborhoods with low-income housing.

Okay, strictly speaking this is meaningless, so it’s impossible to critique it. To the extent that this misty-eyed rhetoric gropes at something real, it is socialism, which five popes have condemned because it destroys the lives and freedom of “people,” as it’s doing right now in Venezuela.

So every form of distinction we make among people is equally as evil as racism. It’s sinful to distinguish at the polling place between illegal aliens and legal voting citizens; in hiring between murderers and veterans; in seminary admissions between gay and straight men.

Does this seem to you like a fair description of life in today’s America? Why do millions of people want to leave countries like Mexico, and risk their lives to illegally enter such a dystopian nightmare society? If the countries they’re leaving are even worse, why does this Message say nothing about the far worse injustices there? Really, all that matters here to the authors is the immigration claim. They clearly believe that criminal aliens who happen to have American relatives have an absolute right to stay in America, no matter what. Or else we’d be “ripping families apart.”

The only elite that really profits from illegal immigration are stockholders in companies that exploit their labor, who strongly oppose Trump’s efforts to enforce our laws. But the authors of this statement couldn’t be bothered to know that. They don’t even know that American capitalism is so hobbled and harassed that our country has dropped to number 17 on the Index of Economic Freedom, its lowest ranking ever.

This is the point in the Message where Bluto (of Animal House) says, “We didn’t give up when the Germans bombed Pearl Harbor!” and Pinto waves off the error: “He’s on a roll.”

This quote, which the Message cites, isn’t from Fidel Castro or Black Lives Matter. It’s from a message of support which Pope Francis wrote and sent the attendees at the “Meeting.”

Next come the hard-headed policy proposals, where the authors scrupulously and calmly apply their dispassionate moral analysis, to seek the most prudent way to implement the moral claims they have made, without violating people’s rights or disrupting public order. Right?

No, of course not. Next comes the section where they grandstand and promise to cooperate with destructive radicals in flouting American law. The authors continue:

Do the Cardinal and all those U.S. bishops, and all those Vatican officials, endorse the Message’s sentiments as authentic Christian statesmanship? As sophisticated moral counsel? As a prudent means to obey Jesus’ command to “Render unto Caesar what is Caesar’s?”

What’s asserted in the Message from Modesto is madness, plain and simple. It is shrill, moralistic nonsense you might expect from an angry teenager who’d been reading Marxist websites and going through hormone surges. It’s every bit as absurd as the Tradinista Manifesto. Put plainly, if the program of the “Message from Modesto” really were what Christianity demanded, we should all convert back to Judaism.

Happily it isn’t. I could devote a whole book to proving that — and in fact, I have: The Politically Incorrect Guide to Catholicism. Let me offer an apropos quote from it:

Pope Leo XIII and his successors … solemnly condemned every system of socialism. Let’s give those popes the credit for being prophets: Long before the gulag, and the famines and purges that decimated Russia, China, North Korea and Cambodia, these theologically educated men predicted such disasters. But the popes relied on more than logic; they also had the lessons of history, in the form of the crackpot millenarian movements that erupted in late Medieval Europe, composed of outraged peasants and self-appointed messiahs, who began as penitents trying to ward off the plague by scourging themselves and ended as armed mobs that massacred Jews and merchants, creating short-lived tyrannies that tried to abolish liberty, property, and (frequently) the family.

Similar movements emerged during the Radical Reformation, as part of the Peasants’ Revolt, which gave the leaders of Protestantism the chance to condemn such madness, which they did. The only way to conclude that utopian leftist collectivism is the proper implication of the Gospel is to ignore all of Christian history, and pretend that you are the first person ever to read the New Testament. Or at least that you’re one of the holiest.

This article was originally published Feb. 25 on The Stream. org and is re-published with permission.

The impoverished faith of the San Diego diocese