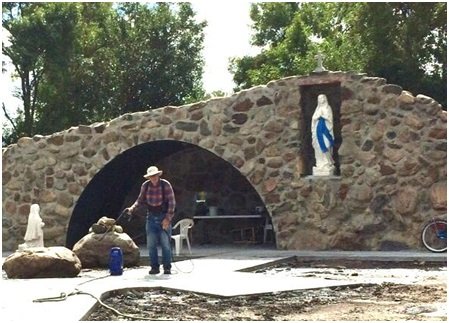 One week before the dedication and counting, Jim seals the concrete walkway and stone work

November 27, 2019 (LifeSiteNews) — There’s a lot of disheartening news being reported in Catholic media these days. There are stories about bishops more focused on political topics than on the salvation of their flock. There are reports about the Amazon Synod, which seems more focused on “mother earth” and Liberation Theology than Christ’s kingdom. Many Catholics who take their faith seriously feel frustrated that any possible redress is entirely out of their control. The Vatican, and even the U.S. bishops’ conference, seems to dismiss concerns voiced by the laity.

Not to be overcome so easily, there’s one husband-and-wife team who decided there was something they could do. Their plan didn’t involve using high tech and social media to defend the Faith (they don’t have Facebook or Twitter accounts) or even writing angry letters to the prelates. No, Jim and Lois McCormick decided to take a more direct and decisive action and plead to the person all good Catholics turn to in times of crisis. They turned to our Blessed Mother and called out to her in a very unique way.

The McCormicks (both 76 years old, but with more stamina than people half their age) are the architects of the grotto built to our Blessed Mother in Salem, South Dakota. Retired after a career as an Air Force fighter pilot and military wife and mother of seven children, they moved back home after having lived, as a military family, on bases all over the world. They built a custom home in Salem and helped out with the family farm but spent some of their time traveling and visiting their grown children and many grandchildren, who live in cities from coast to coast. In 2017, while passing through South Bend, Indiana, they came across a grotto dedicated to Our Lady of Lourdes. In the parish of St. Stanislaus Church, not far from Notre Dame University, parishioners had built a replica of the original grotto in France, which Jim and Lois greatly admired. After returning home, they asked Fr. Martin Lawrence, pastor at St. Mary’s, if he would approve the construction of a similar stone grotto, on church grounds, as a way to honor the patroness of the church. Father Lawrence embraced the idea, so the McCormicks sat down with paper and pen and started mapping out the project plan.

St. Mary’s had an empty plot of land donated to the parish some 16 years previously, directly across from the Church entrance and school. This seemed to be an ideal location for the grotto. With a location chosen and a project plan, the next question was, where to find the materials and the laborers? Spring and summer are planting season in the Midwest, and farmers don’t have a lot of leisure time. Undeterred, Jim and Lois approached fellow parishioners and the Knights of Columbus for assistance. After all, this project was going to require a lot of sweat equity — a task that would take literally thousands of man-hours of construction to complete. The work would be done not by a construction crew, but by volunteers led by Jim and Lois themselves.

As scandal after scandal made the headlines in Catholic media, the McCormicks, aided by the Knights and others, continued their labor of love, as an offering to the Blessed Mother who appeared to Bernadette Soubirous in 1858 and called herself “the Immaculate Conception.” The Salem grotto stones were donated by local farmers (many came from the McCormick farm in nearby Bridgewater), and a steel grain bin sliced in half was bolted down and used as the undercarriage, or framework, for the structure. Hundreds of bags of mortar were mixed and used to cement thousands of large stones placed up and over the arch, each positioned meticulously by hand, then mortared in place. Through the hot and humid South Dakotan summers, the team worked whenever weather permitted (rains made the work site so muddy that progress was delayed). When the first snows arrived in the fall of 2018, it became necessary to place everything on hold until the springtime thaw.

When the weather was too cold or wet to work, Jim and Lois were ordering supplies, negotiating to get city permits, recruiting more volunteers and managing the shipment of the marble statues from overseas. In springtime 2019, with the grotto less than half completed, they began again with renewed vigor. As the grotto grew to 8, 12, and eventually 14 feet tall at the peak and 60 feet long, the stonework and placement became more difficult and dangerous. Yet throughout the project, none of the laborers was injured. Through the summer, there was hope of having the structure completed for a dedication ceremony in October, but heavy summer rainstorms made that increasingly questionable. When weather permitted, ten-hour work days were necessary just to get caught up. Curious Salem residents would drive by and stop to survey the progress, probably wondering what these people were building with all that field stone. Supporters would drop by with treats and cold drinks for the workers.

Almost miraculously, in the final few weeks of September, everything came together. The final rocks were placed, a stained glass window installed, concrete sidewalks poured, curbs were set, and trees were planted. On Monday, October 7, Feast of Our Lady of the Rosary, Father Lawrence along with Monsignor Mangan and Father DeWayne Kayser, all from the Diocese of Sioux Falls, conducted the dedication ceremony, which included a morning Mass, a day of Adoration followed by Benediction, and finally the dedication of the grotto itself. Over 150 parishioners processed from the church to the grotto that evening in a candlelight procession. The McCormicks, Father Lawrence, and all the volunteers felt blessed to have played a part in the building of such a religious destination.

So never say, “There is nothing we can do in this time of crisis in the Church.” Pick up a shovel, a hammer, or a trowel and build something for Our Lady of the Immaculate Conception. As the McCormicks did, you can show those around you that there are many ways to fight back against the “culture of death” and defend the One True Faith. Our Lady of the Immaculate Conception will certainly heed your cries for assistance!

Editor’s note: Steve Johnson is a volunteer who helped with the construction of the grotto dedicated to the Immaculate Conception. The grotto was completed in October in the city of Salem, South Dakota.