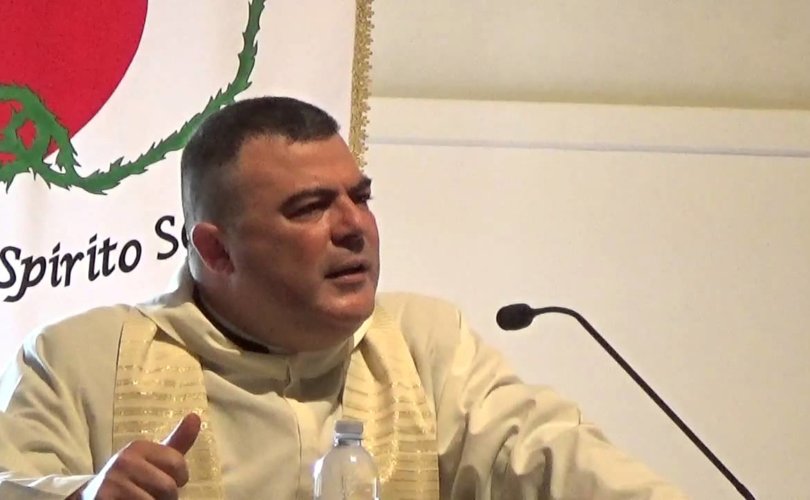 Father Massimiliano Pusceddu is a young Catholic priest serving in the Sardinian diocese of Cagliari. He is under fire for quoting St. Paul's admonition about same-sex acts.

Father Massimiliano Pusceddu is a young Catholic priest serving in the Sardinian diocese of Cagliari. During a sermon on May 28 wherein he defended natural marriage, he quoted St. Paul's letter to the Romans (1:24-32) where the Apostle condemns same-sex acts. The day after the June 12 murder of 49 people at the gay bar in Orlando, an online petition to Pope Francis and Italian political authorities was launched to obtain the “immediate resignation” of Fr. Pusceddu.

It reached 31,000 signatures in only four days — now there are 44,806. What particularly triggered the reaction against the priest was the quotation of the Pauline phrase “all who practice such things deserve death,” which reached the headlines in the media and was used as proof of his support of the killing of ‘gay’ people.

Fr. Pusceddu immediately specified that St. Paul and he obviously meant spiritual death, but it was useless. The uproar did not cease. If the young priest was expecting a hint of public solidarity from his bishop, you can imagine his disappointment when he received none. Rather, on June 22, Archbishop Arrigo Miglio released a note in which he disavowed Fr. Pusceddu's behavior and apologized to “all those who felt hurt” by his words.

According to the archbishop, the passage was “extrapolated from the context and the whole of the Pauline teaching” and that led to “serious misunderstanding and above all it distorted the thought of St. Paul, who in the same letter — chapter 5 and 8 — without a doubt proclaims God's Mercy.” In addition, he ordered Fr. Pusceddu “to observe an appropriate period of complete silence.” Since then, Fr. Pusceddu’s YouTube channel was “temporarily suspended.”

At first, the bishop's behavior reminded me what Hamish Fraser — quoted by Anne Roche Muggeridge in “The Desolate City” — once said: “With shepherds like these wolves become superfluous.” But maybe it is only the effect of a new form of the Stockholm syndrome which could be named “internalized hemophilia.”

Furthermore, lawyer Kathy La Torre flew from Bologna to the village of Decimoputzu where Fr. Pusceddu serves and sued the priest, accusing him of incitement to crime. This fact, like many others, reminds us what Alexis de Tocqueville intended when he described the tyranny in a democratic republic as the place where the master says, “I will not take your life, but the life I leave you with is worse than death.”

After the expulsion of the Christian orthodox thought from the acceptable ethical public arena, it seems that next to be expelled are the persons who keep on believing in the Judeo-Christian traditional moral system. Therefore, with the active or passive complicity of mainline Protestants and Catholics, we are left with three possibilities: a behavior consistent with our Christian faith in the workplace, which leads us to be fined, fired and jailed; or engage only in “low risk” activities and abandon our legitimate aspirations, or eventually surrender, disembody our faith and submit to the worship of the modern Leviathan.

The big problem is that the list of occupations at risk of persecution gets longer day after day. It's not myth, but everyday chronicle. Doctors, nurses and midwives are at risk because legal abortion is considered “human right;” pharmacists, too, with the requests for post-coital drugs; justices and charities have to deal with same-sex adoption; bakers, florists, photographers, typographers, tailors, hoteliers, and restaurateurs with the gay wedding industry; municipal employees with same-sex marriages; principals with the transgender policies in schools; parents with the sexual education programs; journalists, writers, teachers, professors, and priests with hate speech laws. All of these activities put us at risk if we, as orthodox Christian believers, are a living threat to so many modern human rights. So we do not have many choices for doing our job in peace and in good conscience.

The deeply Catholic Italian novelist Giovanni Guareschi in his tale Don Camillo e Don Chichì has Christ from the crucifix answer don Camillo, who's asking the Lord what to do with the secular winds of madness: “You have to do what the farmer does when a river sweeps over the levees and spills into the fields: you have to save the seeds.” For Guareschi, the seed represents the faith.

In a very famous paragraph of the Return of the King, Tolkien writes that our part is “uprooting the evil in the fields that we know, so that those who live after may have clean earth to till.” So we have seed to preserve and fields to protect. The former needs some form of separation from the world, the latter requires a fight.

After polls indicate the majority of Americans support same-sex marriage, after the Obergefell decision by SCOTUS, after the fine applied to a Catholic nursing home for refusing to allow euthanasia of an inpatient by a Belgian court, after the victory of constitutional reform to consent gay marriage in Ireland, after abortion and gay marriage legalization became almost ubiquitous in South America and Europe, including Italy, where the papacy has its seat, we find ourselves as a minority on the verge of persecution. The question that follows is, “What will we do?” It seems to me the time when we will be pushed to a dramatic decision is approaching with unexpected rapidity.

In the absence of a supernatural intervention, as believers we will have to face the aggressiveness of what Mary Eberstadt called the competing secular faith, moving from theory to practice, and choose between the so called “Benedict option” and progressively more advanced forms of passive and active resistance. Albeit they are not necessarily mutually exclusive choices; a coordination is necessary. Going on this way I fear may lead us to the “Catacomb option.”

Anyway, whatever the road, I think we have to accept two inescapable realities. Since the attack is on a planetary scale, we'll need to unite our efforts and cooperate to give global responses. We'll have to expect neither advice nor support from the Church as a social institution. The Catholic Church is a theologically divided and maybe blackmailed entity. The mystical body of Christ is beaten and plagued by an undiagnosed uncured purulent metastatic heresy.

I expect there will be holy bishops, priests, friars, and nuns who will give us their support, but the hierarchical organization as a whole will remain still and silent at best. It will be something that lay people will decide and carry out on their own by discussing and praying together.

Renzo Puccetti  is a visiting professor of Bioethics at the Pontificial Athenaeum Regina Apostolorum and Pontificial Institute John Paul II for Studies on Marriage and Family in Rome.