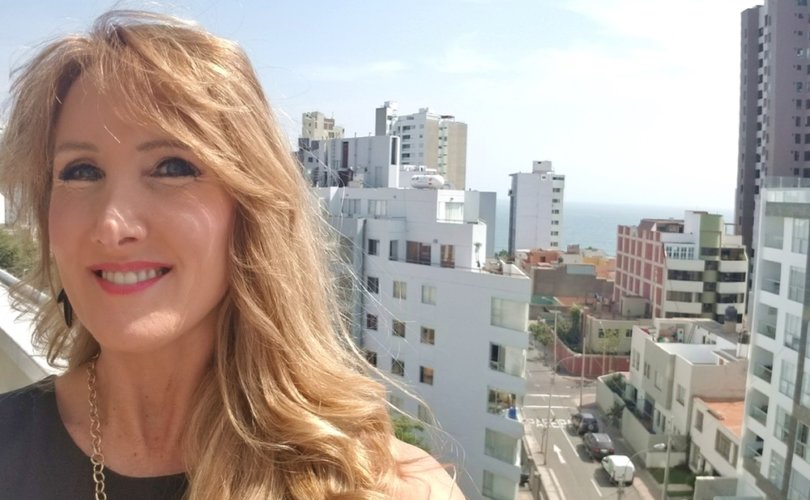 Editor’s note: Rebecca Kiessling, founder and President of Save The 1, gave the following address in Peru this month at an international pro-life conference.

November 24, 2017 (Save The 1) — I’m sure you’ve heard abortion advocates say that it’s barbaric to force a rape victim to carry “a rapist’s child.”  First of all, I am not the child of a rapist – I am the child of a rape victim.  My mother and I object to me being characterized otherwise.  The rapist has no claim to me!  Tell those who say such things, do not insult me or my mother in this way.

Secondly, it is simply barbaric to punish an innocent child for someone else's crime.  Justice dictates that in a civilized society, we punish rapists, not babies. Those who would kill innocent children are the ones who are barbaric!

I did not deserve the death penalty for the crime of my biological father.  My own birthmother had tried to kill me at two illegal abortions, and was pro-choice when we met 29 years ago, but today, we are thankful we were both protected by law from the horror of abortion, just as the women and children of Peru are protected today.   She said back then, the only option she was given was to abort me.  She said that there were no pro-life pregnancy resource centers at the time, and no one gave her any other help or hope.

Peru has legislators who have placed gun sights on children like me.  To them I say, take them off!  Remove me from your scope.  I am not your game to be hunted and killed.  I am a person and deserve life every bit as much as you.  This targeting of life is dehumanizing and demoralizing, not just for those yet unborn, but for every person living who was conceived in violence.  The sting of your hatred is palpable and life-long.

are worth less than anyone else’s.  Imagine hearing of some nation introducing an abortion ban with an exception in cases of babies conceived in Jewish homes, Catholic families, or from Latino moms.

The message which would be sent is that these people are not worthy of living and did not deserve to be protected like everyone else.  There would be an international outcry if the legalization of such prejudice were even proposed because everyone would understand the discriminatory implications and intentions.  Yet, it is the same for us, and we ache from such malice and the reckless disregard for our lives.  Rape survivor mothers grieve how their children are systematically targeted and devalued.  They suffer more because they are not believed they were raped since they did not abort and because they actually love their children.

We appreciate concern for rape victims, but they are four times more likely to die within the next year after an abortion, as opposed to giving birth.  In Dr. David Reardon’s book, Victims and Victors: Speaking Out About Their Pregnancies, Abortions and Children Resulting From Sexual Assault, he cites the research done on the subject.  After an abortion, rape victims have a higher rate of being murdered, committing suicide, drug overdose, etc..  Rapists, child molesters, and sex traffickers love abortion, which destroys the evidence and enables them to continue perpetrating.  Oftentimes, a girl’s own mother has been either trafficking her or leaving her unprotected.

It is always the baby who is the hero of the story, by exposing the rape, delivering her out of the abusive situation, protecting her and bringing her healing.  So if you care about rape victims, you must protect her from the rapist and from the abortion, and not the baby!  The baby is not the scary enemy.  It’s just absurd to suggest that any woman should have to be afraid of a baby.

In regards to a prenatal diagnosis of “incompatible with life” – it is impossible for the baby to be such when that unborn child is still living.  As long as there is a heartbeat, there is life and there is hope. Physicians who peddle abortion are truly the ones with fatal heart defects, often failing to treat the children of parents who refused to abort.  A eugenics mentality becomes pervasive when you allow abortion for any reason.

I see the language of the global abortion lobby and how they try to demean pro-life nations like Peru by characterizing them as antiquated and “third-world,” as if killing the most vulnerable is somehow “progressive.”  The truth is, Peru is a morally superior nation because they’ve established the most important characteristics of a culture – one where people are loved, protected, and accepted.  Child sacrifice is what’s antiquated.  Peruvians, please do not commence a culture of death and discrimination.

We started a Spanish language division of Save The 1 — Salvar El 1 — a few years ago because we saw how Latin America is being targeted by the abortion forces.  They are using the rape issue to try to legalize abortion – on demand for any reason through all nine months of pregnancy at taxpayer expense, just like they did in the United States.  We know how critical our stories are for impacting the culture because it is stories which pierce the heart in ways in which arguments cannot.

In the United States landmark Supreme Court decision of Roe vs Wade which legalized abortion across the U.S., the pregnant woman Norma McCorvey – called Jane Roe, was told by her attorneys to lie that she was gang-raped.  They said this would make her case stronger.  Many years later, she sought to have her own case overturned, feeling the weight of over one million abortions per year on her shoulders.  Nearly 60 million children have been killed in the womb based upon a lie of rape.  The abortion advocates know this and that’s why they exploit the violation of women to open the door for killing any and all unborn children.

As I speak globally, I tell people about the good people of Peru and how they fight like their own lives depend on it – how a year and a half ago, Peruvians successfully defeated the efforts to legalize abortion in cases of rape, and how one month later, they had 700,000 pro-life people attend their March for Life in Lima!  It took the U.S. 40 years of legalized abortion to finally have 700,000 attend our March for Life.

Everyone I tell is amazed that Peru not only had that many people, but that they cared enough to show up to take a stand for the child conceived in rape.  Do you know how many people attended the March for Life in the U.S. when they began legalizing abortion in cases of rape across the southern states in the late 1960’s?  None!  There was no March for Life because scarcely anyone cared!  It wasn’t until abortion became legal for any reason that a March was organized.  Not so in Peru.  The people of Peru are very wise to be so vigilant now.

When I was asked to speak in Peru at the first ever international pro-life conference, I jumped at the opportunity to meet people who are truly my heroes and to be a source of information and encouragement.  Peru demonstrates to the world how to value all life.  They are the pro-life role models throughout the globe!

Recently, the advocates for abortion have again introduced a bill in Peru’s legislature to legalize abortion in cases of rape.  The forces of death and destruction are not going away.  I urge the good people of Peru, do not relent!  Please, don’t let your nation turn into a killing field like the U.S., like Canada, like so much of Europe and Asia.  Don’t spill the blood of innocent Peruvian children on your land.  Continue protection without exception, from the moment of conception.