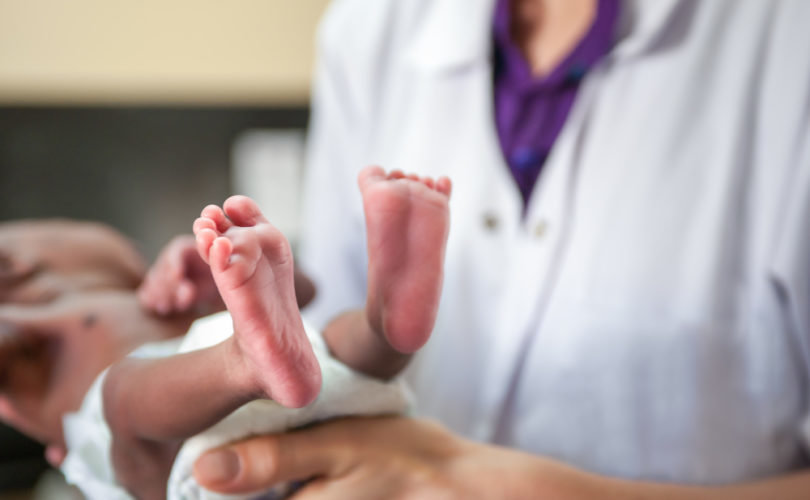 April 19, 2013 (LiveActionNews.org) – On March 29, Live Action covered the debate in the Florida legislature on a bill that would require doctors to give medical care, including transport to a hospital, to babies who are born alive during abortion procedures. A Planned Parenthood representative attempted to answer questions on why Planned Parenthood opposed this legislation. In a shocking video, she said that the decision about what to do with a living, breathing, born infant should be up to the doctor and the woman having the abortion. In other words, it should be permissible to kill that baby.

The belief that once a baby is marked for abortion, he should be killed regardless of whether he is in the womb or out of it is shocking to many people. But how common is the phenomenon of babies born alive after abortions? The truth is, we don’t know. It is likely that most of the cases never come to light. But enough of them have been documented to show that it does happen. In the upcoming series of articles, I will highlight some cases where babies were born during abortion procedures and were denied the right to life.

In 1999, “Baby Hope” was born despite the fact that her mother was in the middle of an abortion procedure. The facts are as follows.

Abortionist Dr. Martin Haskell was performing a partial-birth abortion on a young woman. In a partial-birth abortion, just like in the more commonly used D&E abortion, the woman’s cervix is dilated with laminaria, which are small sticks that gradually expand. She is then sent home. The actual killing and removal of the baby is usually done a day or two after the insertion of the laminaria, after they have been given time to work.

In this particular case, after leaving the clinic, the woman began experiencing cramps and went to the emergency room of Bethesda North Medical Center in Cincinnati, where she gave birth to a living baby girl. According to an article in The Southeast Missourian, the baby was put into a dish and set aside to be disposed of. Nurse Shelly Lowe witnessed the baby gasping and moving after she was told to take “it” to the lab. She reportedly said, “I don’t think I can do that[.] … This baby is alive.”

The doctors refused to give any medical care to the baby, who was estimated to be at least 22 weeks old. Lowe named the child Hope and held her until she died, wrapping her in a blanket and singing to her. Lowe said, “I wanted her to feel that she was wanted. … She was a perfectly formed newborn, entering the world too soon through no choice of her own.”

Baby Hope lived for three hours with no medical care, while local Lowe held her and other nurses watched. According to the article “The Story of Baby Hope” by Liz Townsend:

Hospital workers who cared for Baby Hope report continuing feelings of sadness and grief, but also peace — “peace that she was comforted, held close, and even sang to until she took her last breath,” according to nurse Connie Boyles. Emergency room technician Shelly Lowe held the baby until she died three hours and eight minutes after her birth. “I sat and held her. I felt no one should die alone,” said Lowe at an April 20 news conference held by local pro-life groups. “We had her baptized. I named her Hope because I’d hoped she would make it.”

The article goes on to quote Ms. Lowe further:

“Her bottom lip would go in,” Lowe said. “She would move her hands. The hands would open and close.” The baby’s death certificate reinforces the tragedy of her short life. The cause of death is listed as “extreme prematurity secondary to induced abortion,” which is deemed a “natural” manner of death. She has no official first name and no social security number, and her life is succinctly described by the stark words “never married” and “never worked”. She was cremated.

The nurses who went public with the story of Baby Hope were shunned by fellow members of the medical community for coming forward. Howe faced so much harassment that she was pushed into resigning. Pro-choice groups also attacked the workers in press releases.

We are … extremely concerned about the seeming disregard for this woman’s confidentiality exhibited by hospital employees who went to Right to Life with this story. No woman should have to fear that her personal medical experience will be used as a tool by politicians and anti-choice organizations to further a political agenda.

It should be noted that none of the articles about Baby Hope revealed the name of the woman who had the abortion. Elsewhere in the press release, the incident was described as “the miscarriage of a 22 week nonviable fetus.”

A spokeswoman for another pro-abortion group, Sue Momeyer, chief executive officer of Planned Parenthood of Southwest Ohio and Northern Kentucky, told the Associated Press, “I am concerned that what looks like a very difficult and tragic situation is being used for political purposes.”

Planned Parenthood does not specify whether the tragedy was the fact that Baby Hope died after being born or the fact that she was born at all. After all, if the abortion had been successful, the baby would have died without anyone taking any notice at all.

Sarah Terzo is a pro-life author and creator of the clinicquotes.com website. She is a member of Secular Pro-Life and Pro-Life Alliance of Gays and Lesbians.